(Minghui.org) Falun Gong practitioners and Hong Kong residents held a grand rally and march on March 18, 2018, to celebrate the choice of nearly 300 million Chinese people to quit the Chinese Communist Party (CCP) and its affiliated youth organizations. They also called for an end to the nearly 19-year-long persecution of Falun Gong in China and to bring the perpetrators who started the persecution to justice.

The rally was held at 10:00 a.m. at Edinburgh Place. Many leading figures in the democracy movement and human rights activists showed their support for the 300 million brave men and women who understand the truth of the CCP. They encouraged more people to quit the CCP to bring about the end of communism and a bright future for China. 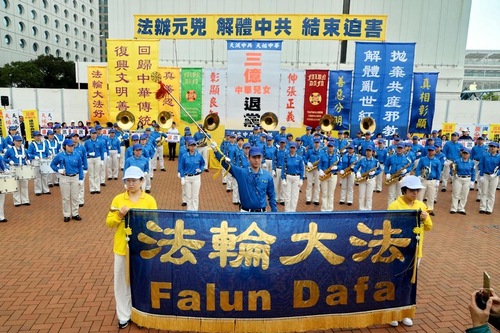 Falun Gong practitioners and Hong Kong citizens hold a rally at Edinburgh Place on March 18, 2018, to celebrate the choice of nearly 300 million Chinese people to quit the Chinese Communist Party and its affiliated organizations.

After the rally, a parade stepped off from King’s Road Playground. The parade passed various Hong Kong landmarks before ending at the Liaison Office of the Central People's Government. The march drew many spectators who gained an understanding of Falun Gong and why it is persecuted by the CCP.

Putting the CCP’s Evildoings on Trial 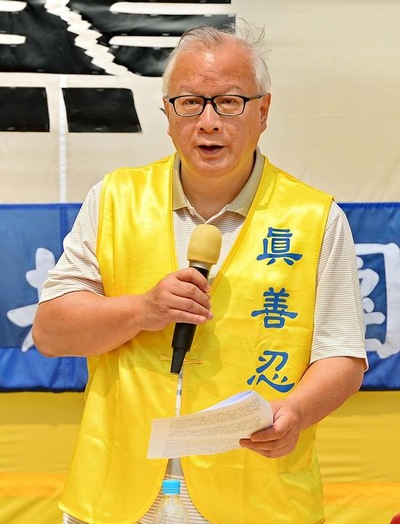 Kan Hung-cheung, spokesperson for the Hong Kong Falun Dafa Association, asks everyone to make a choice between good and evil by quitting the CCP.

At the rally, Kan Hung-cheung, spokesperson for the Hong Kong Falun Dafa Association, said that quitting the CCP wasn’t a political movement but is an opportunity for everyone to make a choice between good and evil. He congratulated the 300 million people who have chosen a bright future and deserted the CCP.

Yi Rong, chair of the Global Service Center for Quitting the CCP, said that the movement of quitting the CCP “opened the page of the greatest spiritual movement in China’s history. It has brought light and new life to the nation as it disintegrates the CCP.”

Dr. Wang Zhiyuan, president of the World Organization to Investigate the Persecution of Falun Gong, pointed out that more than 80 million Chinese people died after the CCP came to power, and that the genocide of Falun Gong practitioners is the worst of all catastrophes that the CCP has orchestrated. “It’s time for everyone to forsake the CCP and hold it responsible for all the heinous crimes it has committed,” said Dr. Wang at the rally.

Support for Quitting the CCP and Its Affiliates 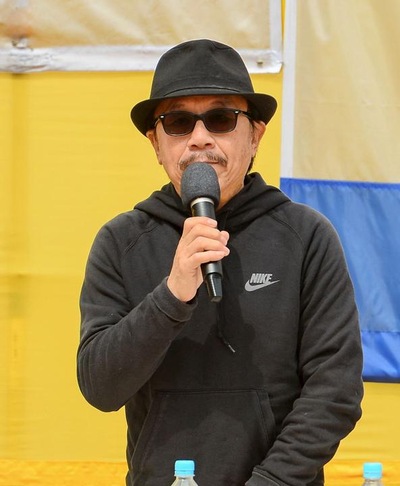 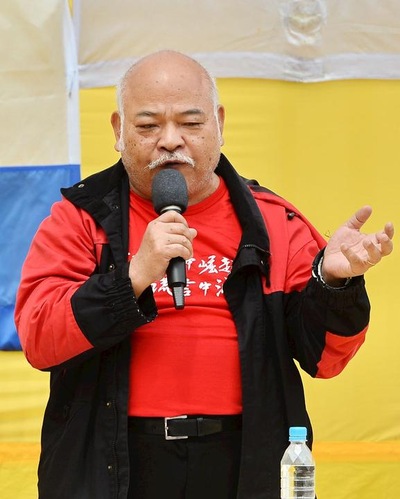 Tsang Kin-shing, a past member of the Legislative Council, condemns the CCP’s extensive effort in persecuting Falun Gong.

James Hon Lin Shan, spokesman for the League in Defense of Hong Kong's Freedoms, said at the rally that members would “go down with the CCP,” as it was beyond corrupt. He called on those who had joined the CCP to quickly withdraw from the Party.

Tsang Kin-shing, a past member of the Legislative Council, condemned the CCP’s enormous monetary expenditures to harass Falun Gong practitioners in Hong Kong. “The CCP is irrational and tyrannical and we must end its dictatorship,” said Tsang.

Wu Chi-wai, chair of the Democratic Party and member of the Legislative Council, praised the Nine Commentaries on the Communist Party as “providing the public a doorway to see what the CCP really is.” He said that 300 million withdrawals from the CCP speaks for itself. “The people have spoken and they do not like the dictatorship,” he said.

Richard Tsoi Yiu Cheong, vice chairman of the Hong Kong Alliance in Support of Patriotic Democratic Movements of China, said that the increasing number of people who have chosen to quit the CCP means that “more and more Chinese and people around the world have realized the CCP's stance against humanity.”

Lawmaker Leung Yiu-chung believes that this many people choosing to quit the CCP means that people have “decided not to let the CCP continue to deprive people of their political and human rights.”

Former legislator Fung Chi-wood called on the Chinese people to take the opportunity to express their anger against the CCP’s rule and encouraged them to read the Nine Commentaries.

Luo Yu, son of a founding revolutionary of the Chinese Communist Party, described the CCP as a corrupt group without belief or morality. He said that because of this, the Party is capable of persecuting good people who practice Falun Gong and harvesting their organs for organ transplants while they are still alive.

Chinese Praise the Principles of Truthfulness-Compassion-Forbearance

The 700-strong parade stepped off in the afternoon. The parade encompassed six distinct themes and was led by the Tian Guo Marching Band, followed by a waist drum ensemble and a flag team. The joyous atmosphere attracted the attention of locals and tourists. 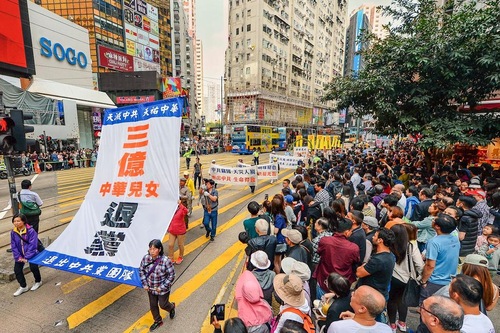 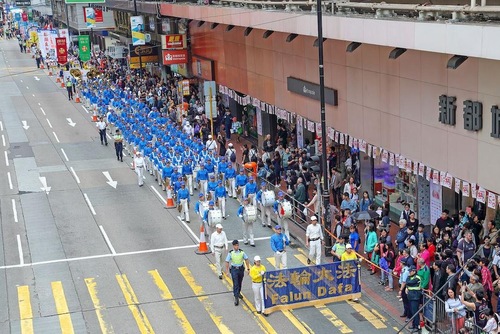 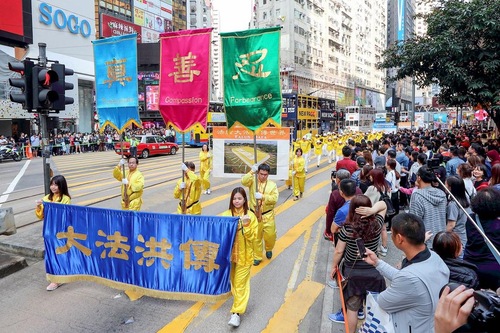 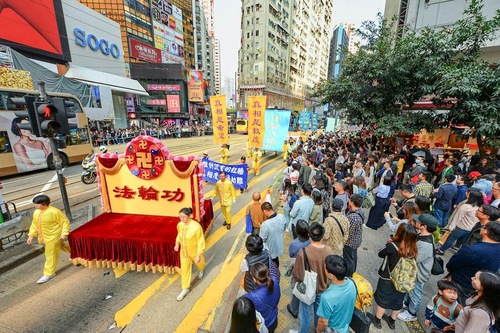 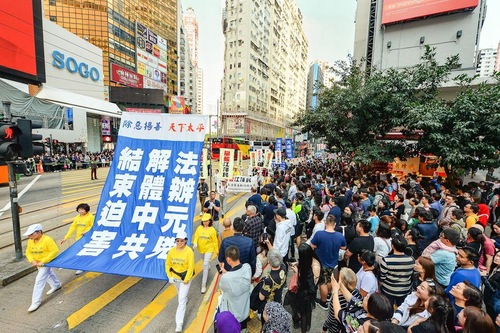 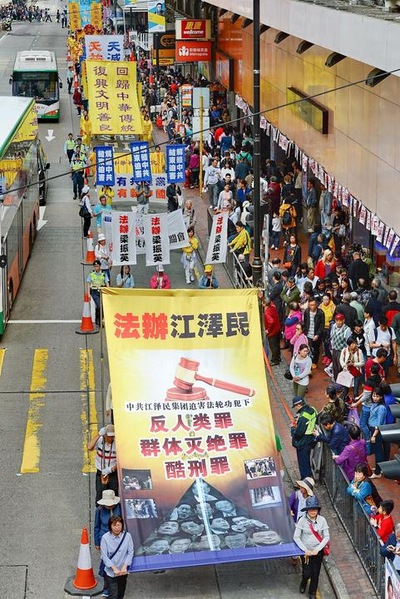 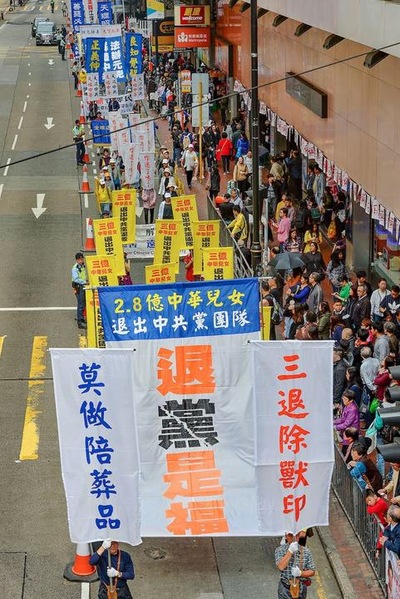 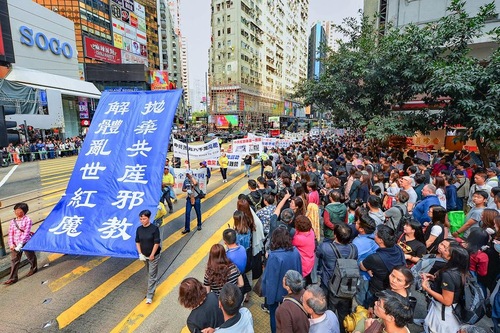 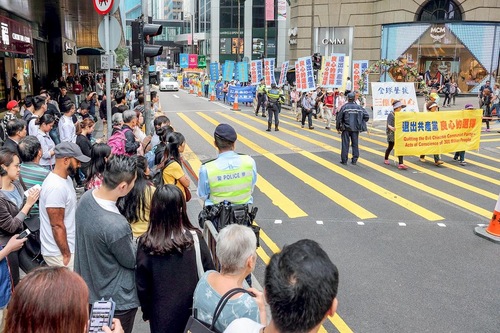 A parade on March 18, 2018 celebrates the choice of nearly 300 million people to quit the CCP. The parade drew the attention of tourists as well as local Hong Kong citizens.

Many Chinese people were excited to see the parade and were supportive of the movement to quit the CCP. They believe that Falun Gong practitioners in China should have freedom of belief.

A couple from Australia, Stan and Rose, couldn’t believe that such a horrible persecution could happen to practitioners in China. “This is totally against humanity and we can’t agree with it,” they said, and promised to spread the word after they returned home.

When Clement from France learned about the persecution and the lies the CCP has tried to spread within the international community, he commented that throughout history “All communist parties have been doing horrible things to mankind.”