(Minghui.org) Falun Gong practitioners have been incarcerated in Liaoning Province Women's Prison since the Chinese Communist Party (CCP) started persecuting the practice in 1999. They have been tortured physically and mentally in the CCP's attempts to force them to “transform” and give up their belief.

There are 13 divisions in the prison, with Falun Gong practitioners in almost every one. Division 12, however, is the worst. It is what they call the “Concentration and Correction Division” or the “Hospital Division,” and it is where practitioners have suffered the most.

Before 2000, it was called the “Insane Group.” It was designated as the Concentration and Correction Division in 2010, its sole purpose to “transform” Falun Gong practitioners. Any practitioner who refuses to give up her belief is tortured by the guards and other inmates.

When the notorious Masanjia Forced Labor Camp was shut down, all Falun Gong practitioners who had been detained there were transferred to the newly-established Masanjia Division in Liaoning Province Women's Prison.

Tactics Used in the Correction Division

Destroy the Practitioner's Will

Chen Shuo, the section leader who took the lead in persecuting Falun Gong practitioners in the Correction Division, makes daily life for the practitioners as restrictive, difficult, and awful as possible. For instance, all their personal grooming articles are taken away, and they are not allowed to use the restroom as needed. They do not have any access to toilet paper in the restroom.

They not allowed to wash their face, brush their teeth, or change their underwear.

There is only one bed in the cell, so the practitioner has to sleep on a wooden board with no mattress or quilt, regardless of the season.

The practitioners are allowed very little food, yet they are forced to stand and squat every day. They are frequently beaten and cursed, struck with electric batons, detained in an isolated cell, and forced to watch videos that defame Falun Gong.

The practitioners are promised that their prison term will be reduced and they will have to do less labor if they agree to be “transformed.”

The guards do everything they can to put pressure on the practitioners to force them to give up their belief.

Instigate Inmates to Torture Them

Ms. Guo Hongyan was tortured so badly that she had to be taken to a hospital. Ms. Liu Xiaoya was tortured until she was skin and bones. Ms. Chen Yazhou was shocked with electric batons. A lady in her 60s was forced to do slave labor in the daytime and then squat under a table for the entire night. Later she was incarcerated in a small, isolated cell. Another practitioner was not allowed to wash her face, teeth, or clothes for six months, and the inmates cursed at her because she smelled bad.

Many inmates try to curry favor with the guards and follow them to persecute practitioners. Some behave even worse than the guards.

The guards and inmates deceive practitioners and say that, if they “transform,” their term will be reduced. However, when it's time for that to happen, the practitioners are told they have to write “three statements” denouncing the practice or the reduction will not be approved. When practitioners sign the statements, the guard says, “You agreed. We didn't force you.”

Division 12 is further divided into five small groups. If any practitioner in the smaller group refuses to “transform,” everyone in the group is punished. They are either not allowed to watch TV or have to write out the prison rules three times. As a result, the inmates curse the practitioners and the Master of Falun Gong. This is agonizing for the practitioners.

Practitioners who refuse to “transform” are not allowed to purchase any food or daily items in the prison and not allowed family visits or phone calls or to mail letters. They are totally isolated from the outside world.

The guards use the basest words imaginable to curse practitioners, some even as old as their grandmothers. Many practitioners give in because they can't take the insults and suffering. Once they “transform,” the guards and inmates change their attitude immediately and smile at them. The environment changes, too, and becomes very relaxed.

If a practitioner returns to her senses and resumes her firm belief in Falun Gong, the guards and inmates go right back to cursing her.

The guards order wealthy prisoners to wash clothes, carpets, car mats, curtains (even from their own homes or the homes of friends), and many other things for them. The inmates cook and make beds for the guards. Even the toilet paper the guards use comes from those inmates. But the guards still don't treat them with respect, so the inmates complain privately. In order to have a better environment, the inmates flatter the guards, smile at them and cooperate with them to persecute practitioners.

Persecution in Other Divisions

In other divisions in the prison, the guards also instigate inmates to beat and curse practitioners who refuse to “transform.”

They also follow the policy of “implication.” For instance, if any practitioner is found reading Falun Gong articles secretly, the guards punish all the inmates in her cell by not allowing them to purchase toiletries. This makes the inmates hate practitioners.

If any practitioner doesn't finish the labor quota in the daytime, she will be punished after returning to the cell. She might have to sit on their suitcases for a couple of hours or not be allowed to speak.

Once Ms. Zhang Wei was taken to the 7th small group, and Liu Yu and another section leader, Guo, beat her severely. They detained her in the small cell and instigated inmate Liu Li and others to take turns beating her.

Ms. Zhang Wei was in critical condition 12 days after she was admitted to the prison. Informants saw inmate Liu Li go to the office of guard Liu Yu to get a small bottle of cardiac medication. The cell where Ms. Zhang was beaten was closed and no one was allowed to enter without permission.

Before they beat Ms. Zhang Wei, the guard and inmates went to the camera video room to figure out what corners the cameras couldn't see.

After Ms. Zhang Wei was taken out of the cell, she walked very slowly and couldn't stand up straight. It took more than a month before she felt better.

Not long after that, section leader Guo left, and Shi Jing, in her 40s, took over the position and continued persecuting Ms. Zhang Wei. Zhang Xiaobing, section leader in Division 1; Zhang Xiaobing, the Division leader; and Liu Yili, who was in charge of the slave labor, were also involved in persecuting Ms. Zhang Wei. She went on a hunger strike and was taken to the prison hospital. 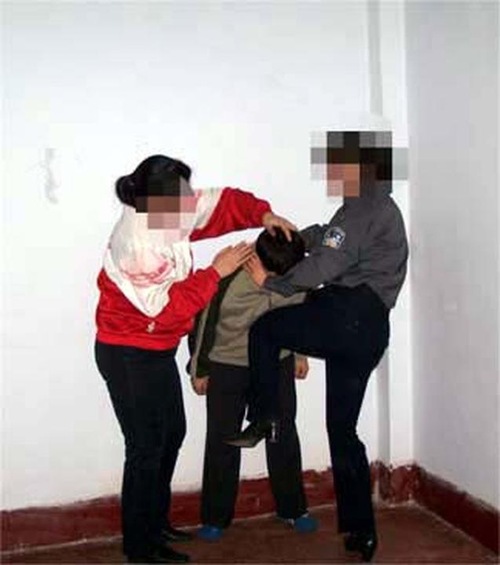 Ms. Liu Pin, who was detained in the 6th small group, became very weak due to mistreatment. She was incarcerated in a small cell for 15 days.

Liu Yili, section leader of slave labor, made practitioners stand and sit motionless at night after working hard all day.

One morning when the inmates were on their way to the workshop, they saw a guard dragging a practitioner on the ground. Some of them even said that the guard was wicked and heartless.

When practitioner Ms. Liu Yanping was taken to the prison in April, Li Wenbo, guard in the 4th small group of Division 4, instigated inmates Jiang Fang, Fan Waning, and Wang Yujie to beat her and not let her sleep, eat, or use the restroom. Her thighs were purple from being pinched. Jiang Fang instigated all the inmates in the small group to beat Ms. Liu Yanping and Ms. Hu Zhehui, a practitioner from Panjin. The two practitioners were classified as being under “strict monitoring.”

Inmate Cai Liyan has beaten practitioners violently in the past. She held Dandong City practitioner Ms. Song Guixiang down and stuck a quilt in her mouth so that she couldn't shout “Falun Dafa is good.” Zhang Yantong, the leader of Division 4, saw what was going on, but ignored it.

The prison presents itself as “civilized.” But secretly, in small, isolated rooms, the persecution of Falun Gong practitioners continues unabated. The guards set many limitations on practitioners and do not let them talk to each other. They are afraid that their despicable behavior will be exposed, so they do not allow practitioners to go outside and watch them closely even when they use the restroom. They never allow practitioners to have contact with visiting officials.

So that the work gets done on schedule, the inmates only get to eat one meal and go to the restroom once a day. They dare not drink anything. One inmate complained, “They are not asking for us to do the work, they are asking for our lives.”

It's more difficult when an inmate gets sick. There is often no timely medical attention. By the time medication is delivered, it is often almost too late.

The above is only a drop in the ocean. During the past 19 years that the CCP has persecuted Falun Gong, untold numbers of practitioners have suffered torture. Some were persecuted to death. Some had their organs removed when they were still alive. So many families have been destroyed. At the same time, untold numbers of law enforcement officials have gotten involved and committed huge crimes.

It's an eternal truth that good is rewarded and evil incurs retribution. Those who are responsible will be brought to justice and their debts repaid.

We encourage the authorities to stop helping the CCP. Stop the persecution of Falun Gong! That is the only way to make the best choice for yourself and your family.

Parties Responsible for the Persecution Described in this Article

“Jiangxi Woman, 76, Sentenced to Three Years for Her Belief”