(Minghui.org) Today's news from China includes incidents of persecution that took place in 7 cities or counties in 4 provinces. According to this report, 6 Falun Gong practitioners were subjected to mistreatment during their detention, and at least 5 were illegally arrested. 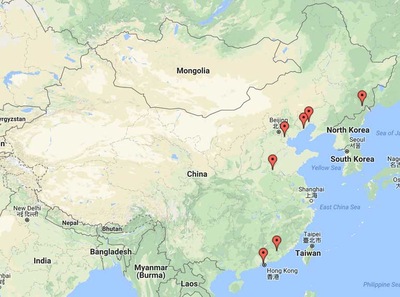 Liu Dongbai, chief of the Yanji City Police Department, and Duan Xiaonan, an officer, body searched Mr. Zhao Zhicheng and ransacked his home on October 19, 2017. They confiscated all his Falun Dafa books.

Ms. Zhang Fenglan, in her 60s, Ms. Shi Hongyun, in her 70s, and Ms. Zhang Yongmei were arrested in Laihe Town, Shan County, and taken to the county police department by officers from the Domestic Security Division led by Bao Lihu on the evening of February 2, 2018.

Ms. Zhang Fenglan escaped in the early morning hours of the following day. Afterwards the officers ransacked her home, and confiscated some personal belongings. They later went to her home once again to harass her. Ms. Zhang Fenglan is still staying away from home.

Ms. Shi's home was also ransacked on the morning of February 3. The officers confiscated some of her personal belongings.

Over 20 officers from the Tianjin City 610 Office, the Hongqiao District Domestic Security Division, and the local police station surrounded the home of Ms. Dong Xuemei's daughter on the morning of December 28, 2017. They broke in and ransacked the place. They arrested Ms. Dong and her husband. The husband was released that evening.

At the same time, the officers arrested Ms. Dong's third elder sister and her eldest sister who were at Ms. Dong's home. Her third sister had been staying with her temporarily.

The officers also ransacked her eldest sister's home. They did not find anything they were looking for. Ms. Dong and her two sisters were released that evening.

The Jinzhou City Intermediate Court ignored Ms. Pan Wenjie and her attorney's defense. Instead, on February 6, 2018, it upheld the original verdict of five years in prison from the first trial without a hearing.

It was reported that Mr. Tu Qingguang was given a four-and-a-half-year prison term. He was taken to the Sihui Prison on December 26, 2017.

The Meijiang District Court issued an enforcement notice and an order to report his property on January 15, 2018.

Mr. Tu was tried on the morning of July 19, 2017. No result was announced in the courtroom that day. It was not until around September 20, 2017 that his family received a notice that he had been sentenced to prison and fined 5,000 yuan.