(Minghui.org) Today's news from China includes incidents of persecution that took place in 11 cities or counties in 6 provinces. According to this report, 3 Falun Gong practitioners were subjected to mistreatment during their detention, and at least 19 were illegally arrested. 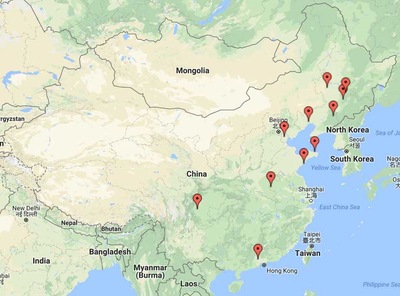 Mr. Li Qing, 70, who lives in Xinglong Village, Xiyang Town, was followed by a plainclothes police officer on April 20, 2017. Afterwards, agents from the Yongji County 610 Office arrested him and ransacked his home. The Yongji County Court secretly tried him on October 14, 2017, and sentenced him to three years and six months in prison. Mr. Li was taken to the Jilin City Prison on January 14, 2018 after he had been held for six months in the Yongji County Detention Center.

Ms. Han Yan, 40, was arrested for exercising her right to sue former Party leader Jiang Zemin by officers from the Beidahu Police Station on June 4, 2017. The Yongji County Court tried her secretly on October 13, 2017, and sentenced her to three years in prison with four years of probation. She was released on December 1, 2017 after she had been held for nearly six months in the Jilin City Detention Center.

Ms. Wang Yuqin was arrested. Her whereabouts is unknown.

Ms. Wen Shuping was dragged from her home into a police car by twelve officers from the Qian'an County No. 1 Police Station, on January 25, 2018. The officers were led by Shi Yuefu. They also ransacked her home and took her two computers and all of her Falun Gong books. She was released the same day. Her family was able to get her computers back the next day.

When they were telling people about the persecution of Falun Gong in the Wuhuang Open Market on January 29, 2018, Ms. Yang Yufang and Ms. Guo Guizhen from the Dongpo District were reported to police, and arrested. They are being held at the Chongli Detention Center in Meishan City.

Ms. He Guirong was arrested at home on December 28, 2017. Her computer, printer, and other items were confiscated. She is being held at the Hebei District Detention Center.

Ms. Tian Suhua was arrested by officers from the Beiguan Police Station on February 1, 2018 for suing former Chinese Communist Party leader Jiang Zemin in 2015. She was taken to a detention center. She was released after the entry physical exam showed she had high blood pressure and the detention center refused to take her.

Ms. Han Mingsu and Ms. Zhang Xiufen were reported on February 1, 2018, for talking to people about the persecution of Falun Gong. They were arrested by officers from the Huangguan Police Station. They were taken to a detention center.

Ms. Li Shuzhen was arrested at home by officers from the Luoyang Road Police Station on the morning of February 2, 2018. Her home was ransacked. Ms. Li, 64, lives at Anyang Road, Luoyang Road Residential District.

Ms. Xu Jianqiong, 69, and her granddaughter, 13-year-old Xian Mingwei, were arrested at home by twenty-four agents from the Haizhu District 610 Office and officers from the Ruibaojie Police Station on the morning of January 31, 2018. While she was interrogated in the police station, Ms. Xu lost control of her bowels. When the 610 Office agents took her for a physical exam at the Nanzhou Detention Center the doctor found a blocked blood vessel in her brain and a large shadow on her lung. The detention center refused to take her. The 610 Office agents released her around 1:00 a.m. after they extorted 3,000 yuan as bail from her family, and confiscated her passport.

Mr. Wang Hua of Weiziyu Town and his six companions were arrested in the Pingdingshan Police Station on the morning of January 31, 2018 when he was asking for his valuables which were confiscated during his arrest four years ago. They were transferred to Xinbin County by Domestic Security officer Zhao Lianke. Mr. Wang's companions were Mr. Zhang Huabo, Mr. Sun Shaohua, Ms. Qiu Hong, Ms. Lu Jinzhen, Ms. Lu Dehuan, and Ms. Yu Zhaoling. Mr. Zhang is being held at the Xinbin County Detention Center. The others are being held at the Fushun City Detention Center.

Ms. Ge Chunying was tried by the Songshan New Area Court. The trial was held in the Jinzhou City Middle Court House on the morning of January 31, 2018.

Ms. Zhang Shouqin was arrested when she was speaking to people about the persecution of Falun Gong on January 31, 2018. She is being held at the Jinzhou Detention Center.

“The Danger of Having a Competitive Mentality”

“Giving Up Human Notions and Elevating with the Fa”