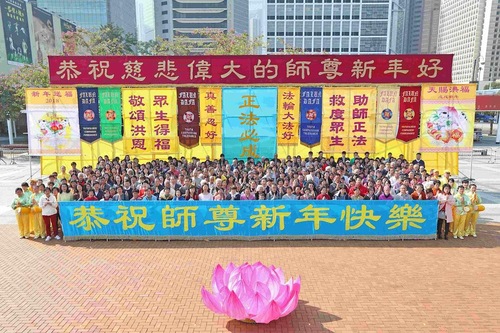 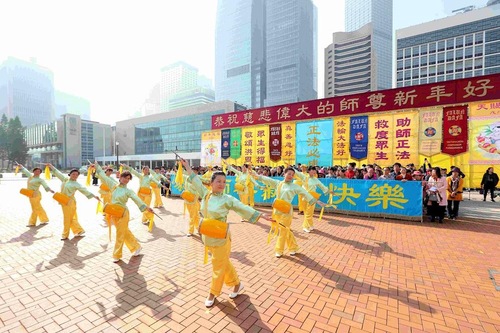 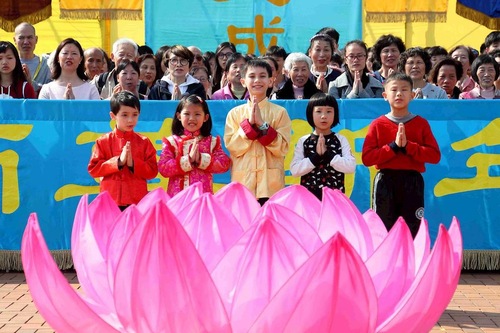 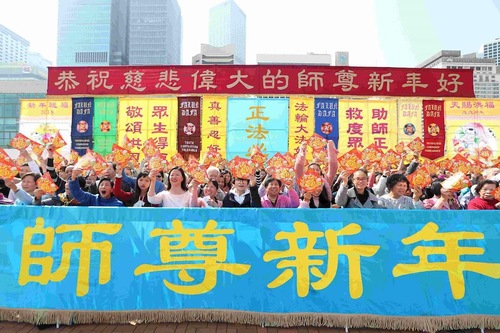 Practitioners hold up the Chinese character for “blessings.”

Both local practitioners and those from mainland China and other regions participated in this event.

She joined a media project after graduating in 2017. She said, “I was a new practitioner, and Master pushed me up and had me catch up with the others. Master made the best arrangement for me.”

She felt that Master gave her wisdom and skills in her work. She was nervous initially as she had never interviewed or met with customers. She said, “Actually, Master is looking after us. We need to let go of worry and instead believe in Master and the Fa with righteous thoughts. Everything will be all right.” 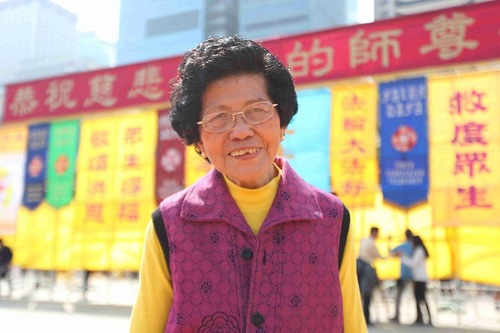 Ms. Jiang turned 88 this year. After she started practicing Falun Gong in 1998, she recovered from a blood disorder, rheumatoid arthritis, stomach cramps, and post-concussion syndrome. She became highly spirited.

She distributes newspapers from Monday to Friday and goes to Causeway Bay on Saturdays to raise awareness of the Chinese Communist Party's (CCP) persecution of Falun Gong in mainland China. She has never skipped a day, no matter if it was rainy or windy.

From Misunderstanding to Supporting Falun Gong 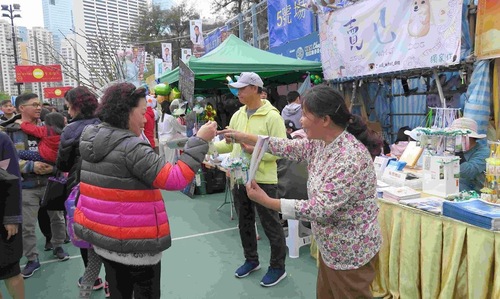 Ms. Shi started practicing Falun Gong in July 1997. Before then, she had psoriasis and a bone infection. She had to have three major surgeries. She recovered from her illnesses after learning Falun Gong.

After the Communist Party began its campaign against Falun Gong in 1999, she went out to talk to people on the street to raise awareness of the persecution. She joined other practitioners to do the same at two tourist destinations every day after 2004.

She said, “We must do our best to expose the Communist Party's nature, clear Master’s name, and have people understand Falun Gong.” She advised Chinese tourists to renounce their memberships in the CCP and its affiliated organizations.

She has seen a change in Chinese tourists over the past 18 years. They initially were afraid of accepting information materials from Falun Gong practitioners. Nowadays, many support Falun Gong openly.

Many tourists said, “Falun Gong is awesome and tells the truth. You must keep the freedom of speech in Hong Kong.” 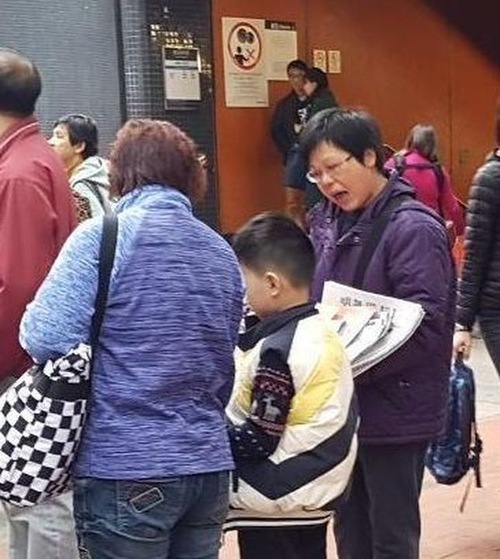 Before Ms. Jing started practicing Falun Gong in 2013, she often wondered about the meaning of life. She found many answers after reading Zhuan Falun, the main book of Falun Gong.

She participated in a Falun Gong experience sharing conference in 2016 and saw Master Li. Her work unit rescheduled her to a night shift that year. She enlightened that Master had arranged her to raise awareness of the persecution during the day.

She toured Hong Kong as part of a mobile Falun Gong booth. She coordinated with other practitioners to distribute pamphlets. When confronted by thugs hired by the CCP, she was not affected and kept distributing information materials. 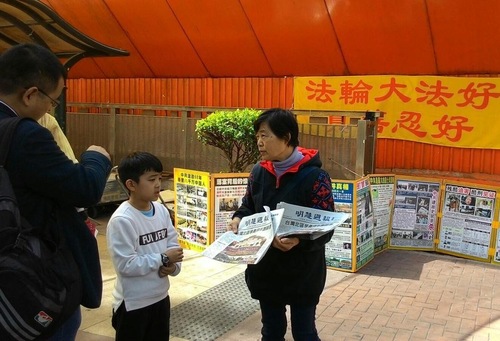 Falun Gong practitioners set up a booth at the biggest Lunar New Year Fair in Victoria Park. The theme of their booth this year is “New Years’ Blessings – Learn About Falun Gong.”

Practitioners gave out paper lotus flowers and other gifts as well as informational materials to the public.

A woman and her grandson visited the fair. She took a paper lotus flower and a brochure. She said she had returned to Hong Kong from Los Angeles to celebrate the Chinese New Year.

She said she knew about Falun Gong and its persecution by the Communist Party and said, “Falun Gong will prevail.” 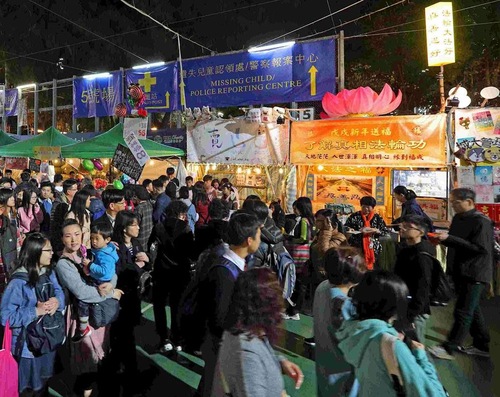 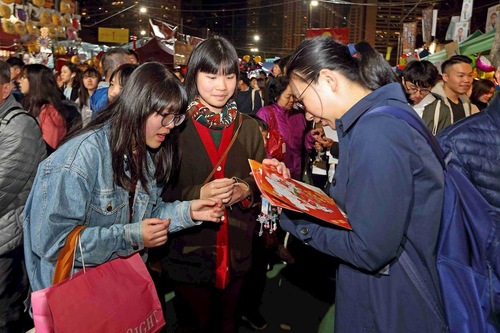 Practitioners distribute the Chinese character for “blessings” as well as paper lotus flowers and information about Falun Gong.

Ms. Li helped run the practitioners’ stand at the Lunar New Year Fair. She said many people came to take posters with the Chinese character for “blessings” and the words “Falun Dafa is good.” Some of them shouted, “You are doing great!” In the week before Chinese New Year, nearly 50,000 copies of the poster were distributed.

Practitioner Zhou and others set up a mobile information stand and toured Hong Kong from Monday to Friday. They visited more than one hundred locations in Hong Kong and distributed information materials.

He felt that more locals and tourists accepted the materials compared to a year ago. Many people expressed appreciation, and some took copies for their family members or neighbors.