(Minghui.org) Today is the first day of Chinese New Year 2018! Besides all the greetings pouring in from Falun Dafa practitioners around the world, the Minghui website has also received a large number of New Year's greetings from family members and friends of practitioners.

Having witnessed the benefits that practitioners draw from the practice, as well as the severe persecution that practitioners in China face every day, these good people have chosen to support Falun Dafa. Their decision to support their friends and family members in upholding their belief has, in turn, brought blessings to their own lives.

One day in late 2017, he felt uncomfortable and went to a hospital. An examination showed that three-quarters of his brain had blood on it and he was in critical condition. He was quickly transferred to a hospital renowned for brain surgery. Being the sole source of income for his family, both he and his family were very worried.

“Just then, a voice told me to recite these words: 'Falun Dafa is good' and 'Truthfulness-Compassion-Forbearance is good',” recalled the shop owner. Although no one was nearby who could have spoken those words, he followed the advice and was able to calm down and relax. After a sound, peaceful sleep, he had another examination which showed that the blood had vanished with only a little scabbing left.

Other patients were surprised when he was released from the hospital several days later; his symptoms had been the most severe and yet he recovered the fastest. He explained to them, “Although I am not a practitioner, I agree with Falun Dafa's principles of Truthfulness-Compassion-Forbearance, and I always help practitioners. That is why I am blessed!”

A follow-up checkup three weeks later showed that even the scabs had disappeared. “Had there been no help from Falun Dafa, this would have been a major tragedy for me and my family,” wrote the shopkeeper. “Now, I've fully understood that this practice is extraordinary.” He has recently begun reading the books about Dafa that practitioners have given him.

A Woman and Her Son Are Blessed

An 87-year-old woman from Qingdao City, Shandong Province wrote that she always carries a card with the phrases “Falun Dafa is good” and “Truthfulness-Compassion-Forbearance is good” printed on it. She had a stroke in 2013 and experienced brain complications the following year. The doctor was concerned about her advanced age and was hesitant to perform surgery. After repeating the phrases on the card and listening to Falun Dafa audio lectures, this woman recovered in about 7 days. The doctor was surprised and was very happy for her.

Her son was in a major car accident in 2016 and had fallen into a coma. “Anyone who saw the accident said that my son had no hope, and even the doctors shook their heads,” recalled the woman. But her daughter did not give up on her brother, and she played Falun Dafa audio lectures by her brother's bedside. The man regained consciousness ten days later and fully recovered within a few more days.

This woman is very thankful that Falun Dafa has given her and her son a second life. “Thank you so much, Master Li!” she wrote in her greeting.

A practitioner in Linghai City, Liaoning Province, said that her family supports her practice of Dafa, and as a result, the entire family has benefited.

The practitioner's daughter-in-law had an ectopic pregnancy. She asked Master Li for help and also recited the phrases, “Falun Dafa is good” as well as “Truthfulness-Compassion-Forbearance is good.” The delivery went smoothly and the baby was healthy and smart: he was able to say “Mama” and “Papa” after four months, and “Grandpa” and “Grandma” after six months.

Her daughter's father-in-law needed surgery for heart disease that had plagued him for 35 years. He was very nervous about it and did not know what to do. The entire family repeated those phrases and the surgery went very well, with a smooth recovery.

Another worry for the family was that the practitioner's daughter had not been able to have a child. After the family recited the phrases, she soon became pregnant and had a baby, the first boy of the third generation. The entire family was very joyful.

Good Wishes from a Student Overseas

A young woman studying overseas wrote, “I come from China, a land with a long and glorious culture. Unfortunately, the communist party began to suppress Falun Dafa practitioners for their belief in Truthfulness-Compassion-Forbearance in 1999, and the persecution continues to this day.” She learned about Falun Dafa from several relatives who are practitioners and she subsequently quit the Chinese Communist Party (CCP) and its affiliated youth organizations.

This young scholar believes that her support of Falun Dafa and her quitting the CCP made it possible for her to fulfill her dream of coming abroad for her college education. “I know that these are blessings from Falun Dafa and I am so thankful,” she wrote.

This student hopes to one day become a Dafa practitioner herself, who is considerate of others and strives to be a better person. “That is a wish I hold dear to my heart,” she said.

The Hope of Society

A family member of a practitioner who lives in Wuhan City, Hubei Province, said that he has met many practitioners who are kind, tolerant, and compassionate. “Despite the harsh persecution, they are putting forth lots of effort to debunk the lies spread by the communist party that attack Falun Dafa. They are doing this because they care about others. Only the great Buddha Fa principles could forge people who are so selfless and with such perseverance. We are all proud of you, Master Li. You and practitioners are the hope of society.”

Although he worries about practitioners' safety, this person understands that what practitioners do is important and dignified. As a result, he fully supports them and signed a petition urging to bring Jiang Zemin, the former communist party leader who started the suppression of Falun Dafa, to justice. He also decided to renounce his membership in the communist party organizations. He knows that doing these things is the right thing to do and he has been blessed many times over.

“I will continue to help the practitioners in my family as much as I can so that they will have more time for cultivation practice and saving people,” this man wrote. “And most importantly, I want to thank you, Master Li, and wish you a Happy New Year!” 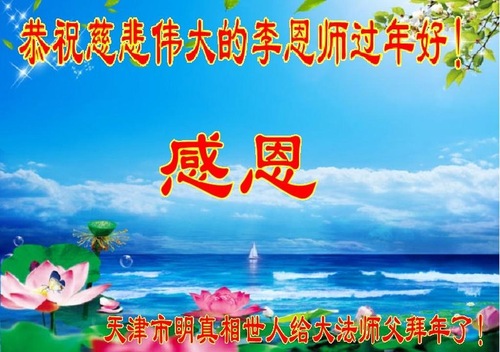 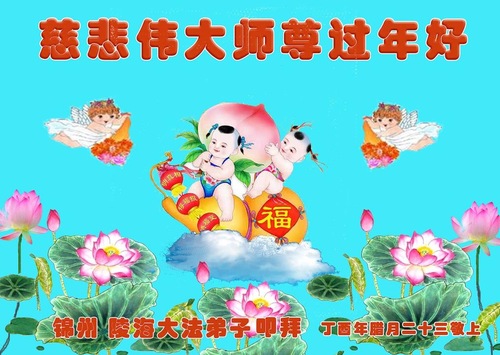 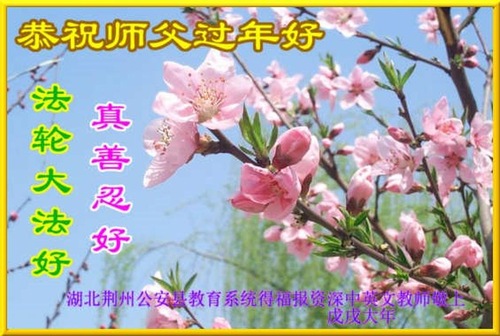 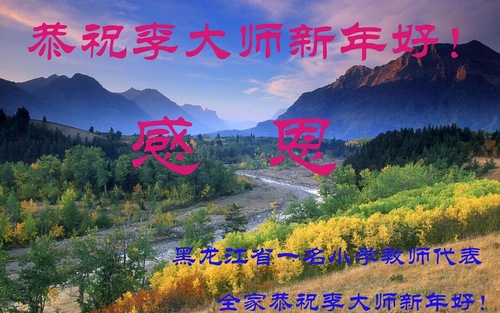 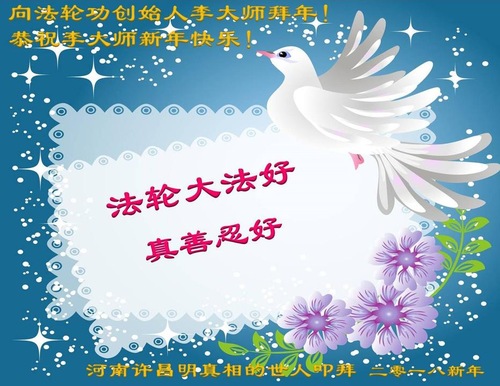 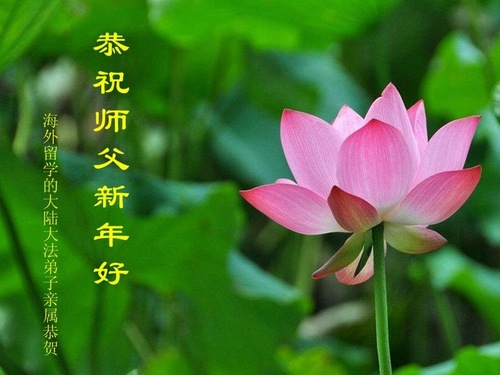 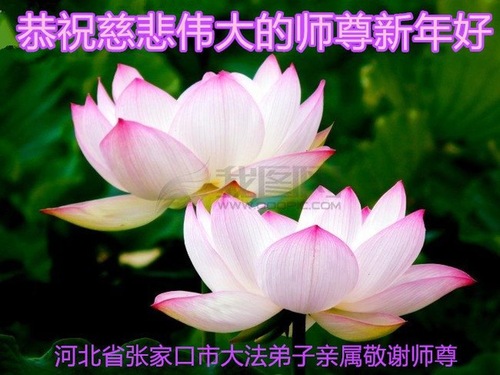 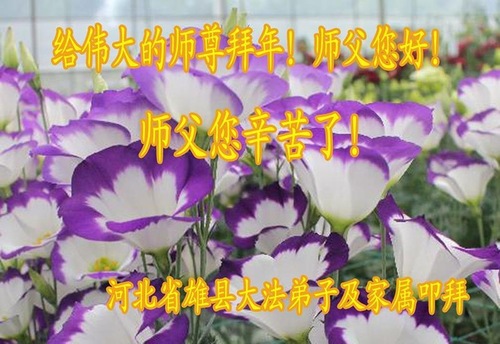 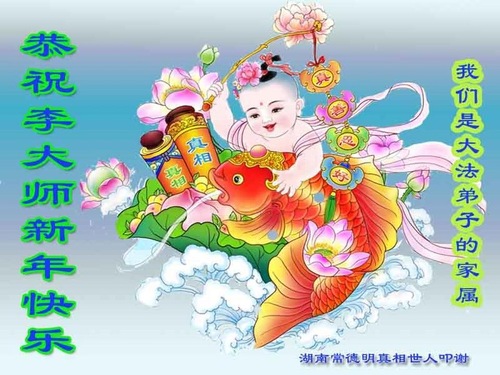