(Minghui.org) I am a 63-year-old who used to suffer from different ailments for which doctors could not find the cause. Someone from my village introduced me to the self-cultivation practice of Falun Dafa in early 1997. After I listened to the first lecture in Zhuan Falun, I realized that this was a spiritual practice that taught one to become a better person.

As I did not have the other lectures, I went to get them from my neighbor. My mother-in-law was surprised because I had not been feeling well and had difficulty walking. I was amazed that I could walk to the other house, an unknown feat for me.

By the time I heard all nine lectures, I had recovered from all my illnesses. My family also experienced the power of Falun Dafa and told me that I should have taken up the practice a long time ago.

After the Communist Party started its persecution of Falun Dafa in July 1999, I continued to do the Dafa exercises in the park. I also went to Beijing to appeal for the right to practice Dafa. Police arrested me many times and held me in a detention center.

Police in Beijing arrested me in June 2000 and locked me in an iron cage. I was deprived of food and water and not allowed to use the bathroom. They banged my head against a wall, and an officer kicked my calf with her leather shoes.

When I went to Beijing to appeal for justice another time, my family prevented officers from taking me to a mental hospital for further abuse.

For telling people about Falun Dafa and the persecution and pasting stickers with information about Dafa on walls, I was detained many times, taken to a forced labor camp for two years, and tortured. I also had to leave home and become destitute many times. My family also suffered in the persecution because of the Communist Party’s policy of implication by association.

Nevertheless, the persecution did not make me renounce my faith. After I was released from detention, I continued to cultivate myself and tell others about Dafa and the persecution. I was harassed by police and became destitute many times.

When my husband and I were on our way to a market in October 2008, our bicycle was hit by a car. The front tire of the car went over my husband’s thigh and then ran over my left foot and left leg. In my heart, I asked Master Li Hongzhi, the founder of Falun Dafa, to protect us.

As I could not stand up, my family and the driver took both of us to a hospital. My husband was fine, but I had broken bones. My family did not let me leave the hospital, and the doctor put three steel nails on the right side of my foot and two such nails on the left side.

After remembering Master Li's teaching, I told my family that I wanted to go home, as I would recover quickly once I practiced the exercises and studied Zhuan Falun.

At home, I studied the Dafa books and practiced the exercises. While sitting in meditation, the broken bone in my left leg and the nails bothered me, so I said, “I’m not scared of you.” Even though the pain was unbearable, I still finished the exercises. Every week, practitioners came to visit me and dropped off a few copies of Dafa materials. After I finished reading them, I gave them to my neighbors.

After two months, I thought, “The nails on the right are a nuisance when practicing the exercises and talking to people. They need to be removed.”

When I sent righteous thoughts, I first begged Master to strengthen my righteous thoughts and then communicated with the nails, “It is the Fa-rectification period now. Everyone and everything needs to position itself. If you stay where you are, you are interfering with my ability to clarify the truth to people and do the exercises. Please come out and stop interfering with me. I will cultivate diligently. If I reach Consummation in the future, I will give you a good position.”

After a while, I felt something cold in my socks and then noticed that one nail had come out on its own. Then, I continued to send forth righteous thoughts, and two more nails came out.

There were still two nails, so I talked to the two nails on the left side of my foot two months later, “You all went in together. Why are you still staying there? Please come out.” I begged Master to strengthen me before I sent righteous thoughts. The other two nails also came out of my foot without an operation. 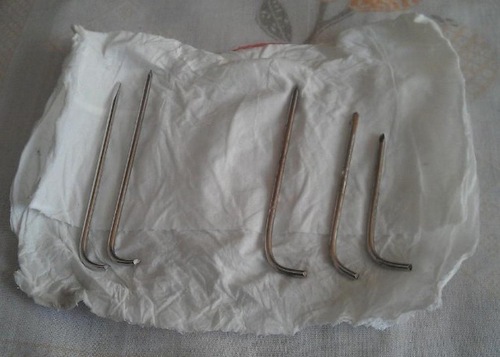 The five steel nails that came out of my bones

“Blindness Does Not Stop My Cultivation”