A Young Woman's Sharing on Her Cultivation of Falun Gong

(Minghui.org) Although Ms. Li Jiahong was treated like a princess by her parents, she was unhappy, stressed out and overworked. However, after coming across Falun Gong, her outlook in life changed.

She recounted that her parents indulged her. She said, “I grew up feeling entitled, yet unhappy. I did not do any chores. My only duty was to study and excel in it. I was under tremendous pressure. Since kindergarten, I was enrolled in every extra curriculum activity, such as math, writing, English or science classes, and also ballet and violin lessons. I was either in a class or traveling between classes every day, including weekends.”

She was very unhappy, as she hardly got to play, perhaps once or twice at the most. “I never bothered asking my parents if I could go out to play because I knew they would say no,” she said.

Ms. Li excelled in school and got the highest grades every year in elementary school. She was also the class president. To her parents, good grades were everything.

She continued, “I was under more pressure when middle school began, because of endless homework. My home was like a prison and I didn't want to go home. I decided that one day I would leave that 'prison'.”

“The school assignments were not difficult, the real pressure was that I was expected to be number one in my class. What a tiresome life I had!”

“I was burned out in the last year of junior high school (equivalent to ninth grade in the U.S.) For several months, I cried every time I saw my textbooks since I had no motivation to study. The day before my senior high school entrance exam, I cried as I didn't want to take the exam.”

She was only accepted into the third school of her choice. Her parents were truly disappointed and didn't want to talk to her.

Several years later, her mother gave her the book Zhuan Falun, the main text of Falun Gong in 1999 when she was 18 years old. Many of her colleagues were practicing it, so she thought her daughter would be interested in it.

She shared, “I stayed up all night reading the book. My heart was bursting with excitement and yelling: 'I have found it! I have finally found it!' I felt that this was what I had been waiting for. I wrote in my diary: Today is the first day of my new life.” 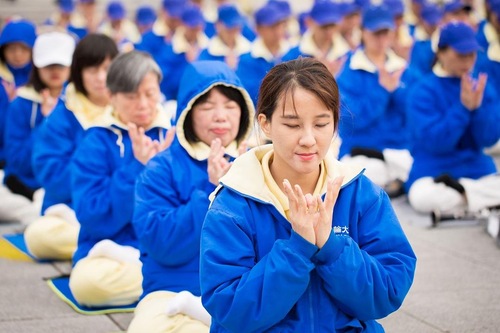 Ms. Li followed the Falun Gong principles of Truthfulness-Compassion-Forbearance. It helped her to let go of many attachments. She said, “the bitterness in my heart is gone, and I now know how to live my life. I used to be under so much pressure that I couldn't see the end in sight. I am now happy. Every day is a fresh start.”

She had never wished her parents a happy mother's or father's day, as she was filled with so much hatred and resentment, and felt that she was a victim of their failed parenting.

“I would have left the country,” she said, “to never see them again if I had not practiced Falun Gong. I now realize that I was the selfish one! I was self-centered and only cared about my own feelings. I was not considerate of others. I now care about them very much. My parents have seen the positive changes in me.”

Ms. Li's chronic eczema disappeared after practicing Falun Gong and she felt stronger and healthier. She also looks younger than her age. When asked about her “beauty secret,” she would tell people, “It is all because I practice Falun Gong. I used to get upset when others treated me poorly. I would hold grudges and argue with them. I now treat conflicts with a light heart. I am better at forgiving others and being more understanding. When I let go of attachments, my body goes through fundamental changes, and it is reflected in my appearance.”

“I remember one of my managers blocked me from getting promoted several years in a row. It didn't matter how others treated me, since I was a practitioner. I would overcome it.

'We should try to keep compassionate and pleasant while karma is being reworked. By doing so, your judgment won’t be clouded due to the pain you are in and lead you to mishandle things, as might normally happen for people. And you will be able to handle anything unforeseen that comes along. If your heart is always very kind and compassionate, you will usually have breathing room and space to think when situations come up unexpectedly.' (The Fourth Talk, Zhuan Falun, 2018 Translation Version)

She was not angry and still treated everyone with compassion, including her superiors.” 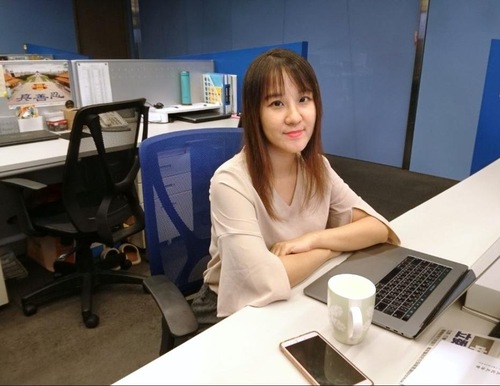 Ms. Li treats everyone with compassion.

She was able to let go of the feeling of being wronged and the eagerness to explain herself. “I corrected my attitude and approach toward my job. I pondered each case more thoroughly and took the initiative to understand everything related to my projects. I came up with proposals before my manager even asked for them.”

Situations like this became Ms. Li's stepping stone for self-improvement. Instead of pointing fingers, she quietly corrected her imperfections. She was later praised by her manager in front of her colleagues.

She said, “I used to live in my own little world – very self-centered. After I started to practice Falun Gong, I started to care about others, and understood that my life had greater responsibilities,”

From reading the Falun Gong teachings, she realized that the root of worries come from selfishness, jealousy and sentimentality. A person's mind would not be troubled if his/her heart was filled with compassion and kindness. “As I let go of those elements in my life,” she said, “my heart felt lighter.”

“A Human Mindset Keeps Us from Rectifying the Fa”