(Minghui.org) Falun Gong (also called Falun Dafa) practitioners in Spain introduced Falun Gong, a traditional self-cultivation practice, at a national health expo in Madrid in November 2018. Tens of thousands of people from all over Spain attended the expo, looking for ideas to improve themselves. Many had an opportunity to find out about the benefits of Falun Gong and learn the exercises. 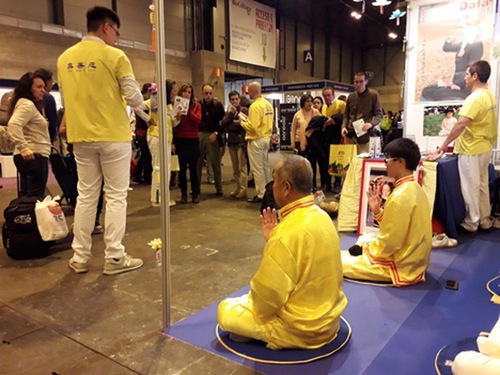 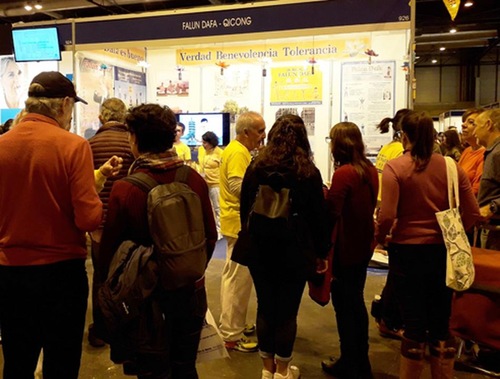 The Falun Dafa booth at the health expo in Madrid, Spain

Falun Gong practitioners wearing bright yellow uniforms demonstrated the exercises accompanied by the tranquil exercise music. Visitors were fascinated by the exercises and stopped to watch, take introductory materials, and ask where they could learn the practice. Some bought copies of Zhuan Falun, the main book of Falun Dafa.

An acupuncturist told a practitioner that she had cured some patients but ended up having health problems herself. She became badly depressed and had to stop working. She said she felt very relaxed and comfortable watching the Falun Gong exercise demonstration and was happy to recapture the feeling that had eluded her for a long time. She said she would certainly read the Falun Gong books and cultivate herself.

A couple at another booth saw the words “Falun Dafa” on the T-shirt of a practitioner walking by. They asked, “Is Falun Dafa the same as Falun Gong, the group that is being persecuted in China?” Hearing that they were correct, they followed the practitioner to the Falun Gong booth to buy books and videos to learn the exercises.

A practitioner gave a young woman watching the Falun Gong exercise demonstration with her mother a paper lotus flower. The practitioner told her that the Chinese characters on the bookmark hanging from the flower meant “Truthfulness-Compassion-Forbearance.” Tears came to the young lady's eyes, and she said she didn't know why, but she felt like a lost child who had finally found a home. She pressed her hands together in front of her chest to thank the practitioner.

When one couple visited the booth, the husband was excited to see the book Zhuan Falun. He said, “I have been looking for this book!” He wanted to buy two copies, but his wife hesitated and asked him, “Why don't we get one to start with?” He replied, “No, no. It's a rare and great book. Both of us need one.” He carefully put two books into his bag.

A young lady told a practitioner that she was a Qigong master and could feel the strong energy at the Falun Gong booth. She showed great interest after hearing that Falun Gong was a cultivation practice of the Buddha school. She asked, “Who is your master?” Pointing at the TV monitor, a practitioner said, “Li Hongzhi, who is teaching the exercises in this video.”

When the lady asked, “Where is he?” the practitioner replied, “He is in the United States.” The lady said, “No. No, your master is standing right behind you.” It turned out the lady's celestial eye was open and she could see Master's law body in another dimension. She asked many detailed questions about Falun Gong and decided to study the books.

Many local Chinese visited the health expo and had the chance to learn the facts about Falun Gong. The owner of a well-known Chinese restaurant was pleasantly surprised to see a Falun Gong booth. He said, “I know Falun Gong is great and has been wronged in China.” He said he supported Falun Gong activities. 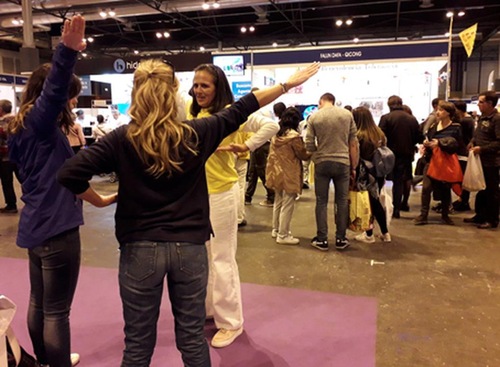 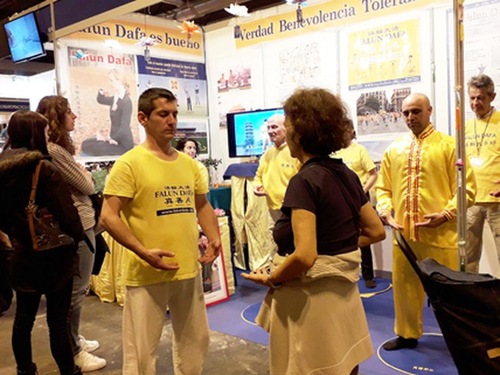 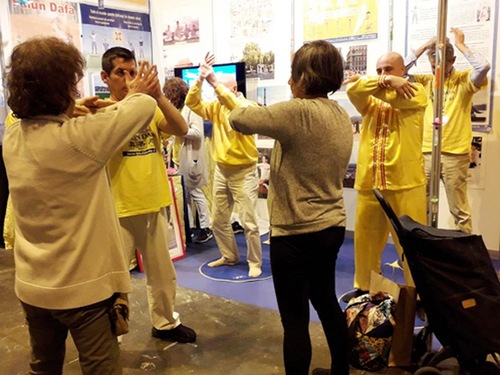 A steady stream of people learn the Falun Gong exercises at the expo.

Many people left their contact information or planned to invite practitioners to teach the exercises in their areas. Some learned the exercises at the expo.

“The Most Trustworthy Tax Collector”