(Minghui.org) A special exhibition of The Art of Zhen, Shan, Ren (Truthfulness, Compassion, Forbearance) International Exhibition was held inside the Salvador City Hall Arts and Cultural Center in Salvador, Brazil. The exhibition ran for two weeks in November 2018.

Visitors learned about Falun Dafa, a traditional mind-body cultivation practice from China, and gained an awareness of the Chinese regime's brutal persecution of the practice. Many expressed concern about the persecution in China. Local media, including TV, newspaper, and radio, reported on the event. 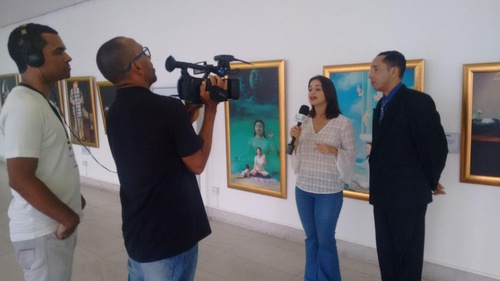 Isabela from the State Parliament TV Station reports on The Art of Zhen, Shan, Ren Exhibition.

In an interview with the State Parliament TV Station, practitioners introduced Falun Dafa and talked about how the teachings of the practice are helpful in all areas of life, and beneficial to society in general. They also talked about the ongoing persecution in China, including the state-sanctioned forced organ harvesting of Falun Dafa practitioners and other prisoners of conscience.

Reporter Isabela concluded the interview with, “Let's be aware of the persecution in China, speak for those being persecuted, let more people learn the facts and tell them about the principles of Truthfulness-Compassion-Tolerance.”

After the interview, the cameraman shook hands with a Chinese practitioner and said that he was very impressed that practitioners have been so persistent despite the brutal persecution. 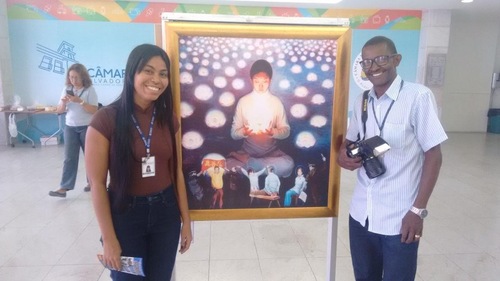 Reporter Marcela and photographer Reginaldo of State Parliament TV turned the story about the artworks into a feature. Marcela exclaimed, “The world truly needs Truthfulness-Compassion-Tolerance!”

Visitors Moved by the Artwork

As a therapist, Regina uses herbal medicines in her therapies and said that she has an affinity with oriental culture. She said she was very happy to see the paintings and that they touched her heart. Regina said that when she saw the paintings, “It was as though a shock of energy went through my body.”

She made a video of the artworks and told practitioners that she would post it on her blog to encourage more people to come to the exhibition. She wants more people to learn about Falun Dafa.

Jailson, a career instructor, said that he's tried many kinds of meditation but still felt that something was missing. After he looked at all the artworks in the exhibition, he was excited and told a practitioner volunteering that this was a special day for him.

Jailson said, “I have been looking for a profound cultivation practice for a long time. I found it today!” He learned the standing exercises before returning to work and said that he would learn the rest of the exercises at a local practice site in a park and continue learning more about Falun Dafa online. 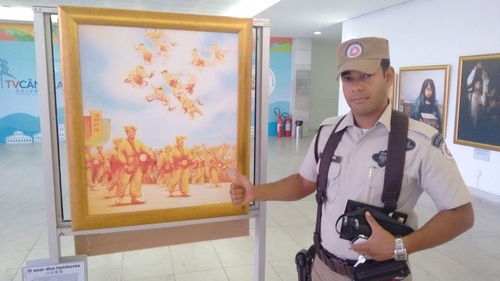 Castro, a State Parliament police officer, was moved by the practitioners' bright smiles.

Walmire, a retired teacher, and Julio, a drama writer, were also among the many visitors who came to see the paintings. Walmire said that he is attracted to Chinese culture and Chinese painting. As he stood in front of one painting, he said, “I feel drawn to this painting, as though a force was pulling me to this Buddha and I feel at home.” 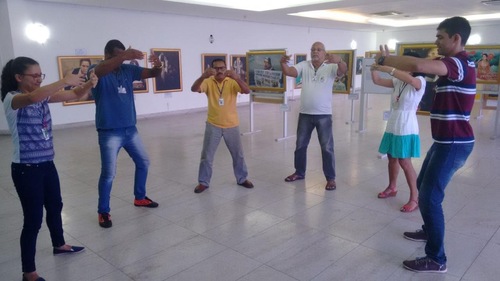 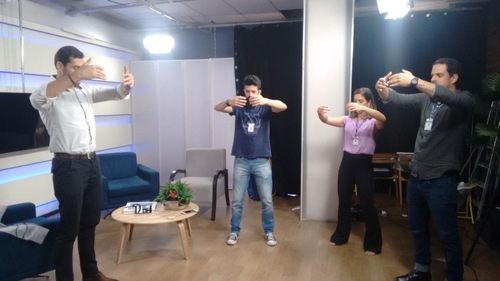 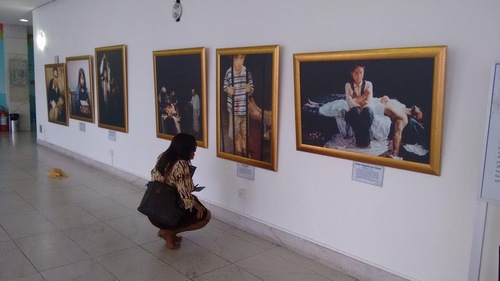 Ms. Flavia, a human rights advocate in São Francisco do Sul, reads the information about a painting. She exchanged phone numbers with practitioners and hopes to bring the exhibition to her city.

Salvador, the capital city of Bahia State, is a historical city in Brazil. It was established by the Portuguese in 1549 as the first capital of Brazil. The city is one of the oldest colonial cities in the Americas.

“Discovering My Problem of Being Unable to Take Criticism”