(Minghui.org) Today's news from China includes incidents of persecution that took place in 8 cities or counties in 5 provinces. According to this report, 23 Falun Gong practitioners were subjected to mistreatment during their detention, and at least 8 were illegally arrested. 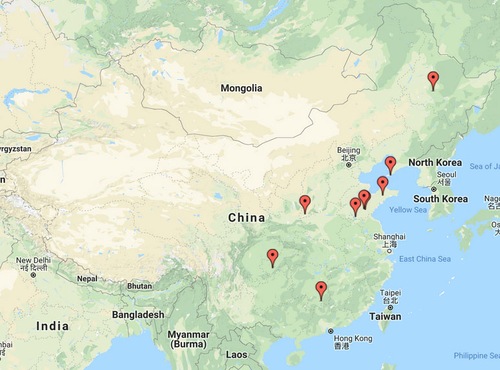 Mr. Sun Jun was imprisoned in the Shenyang No. 1 Prison in late 2017, and he began a hunger strike soon afterwards. His parents, who are in their eighties, attempted to visit him 13 times, but were denied 10 times because of the hunger strike. Because the guards wanted his parents to pressure him to end the hunger strike, they allowed them to visit him on November 29, 2018. It was learned that Mr. Sun has been given an IV every day, but after ten days, the needles would no longer penetrate his veins.

Agents from the Laiyang City 610 Office, along with police, repeatedly harassed practitioners.

Mr. Xu Yongjie of Shiyuantou Village, Yukeding Town was arrested at home at noon on September 31, 2018.

Four officers from the Longmenlu Police Station broke into the home of practitioner Ma, whose first name is unknown, and confiscated computers and Falun Gong books on the morning of November 14, 2018.

Zhao Xuhui, director of the Shanqiandian Town Police Station, led officers to Mr. Wei Hengchen's home in Beiyejibo Village on the evening of November 20, 2018. They confiscated TV receivers, a picture of Falun Gong's founder, and books. Six officers returned the next day, seized many personal belongings, and took Mr. Wei to the police station. Mr. Wei was released that night.

Mr. Dong Jie of Chengxiangwugezhuang Village was arrested at home on the morning of November 22, 2018. He was detained for 15 days.

Mr. Du Weiguo of Shanqiandian Town and his wife, Ms. Cheng Meiying, were arrested on the morning of November 29, 2108.

Officers broke into Ms. Wang Zhihua's home in Yukeding Town in November 2018. They photographed Ms. Wang and her guests, and then took her to the police station. She was later released.

Ms. Gao Meiying of Xishuitou Village, Jiangtong Town was arrested by officers from the Laiyang City Domestic Security Division on the morning of November 29, 2018. The officers confiscated her computers and other machines. Ms. Gao is being held at the Laiyang City Detention Center.

The Yinan County Court tried Mr. Du Yihe at the Yinan County Detention Center on or around November 24, 2018. Mr. Du pleaded not guilty on his own behalf in court.

Mr. Du is from Dongcaiyuan Village, Suchun Town, Yinan County. He was arrested and taken to the Yinan County Detention Center on May 28, 2018.

Ms. Wu Qun from Banan District was arrested by officers from the Shuanghekou Town Police Station on November 28, 2018. She was taken to the Banan District Detention Center the same day.

The Zaozhuang City Intermediate Court held a second trial for Ms. Sun Zhongfeng and Ms. Ren Weihua on the morning of November 30, 2018. Ms. Sun and Ms. Ren were sentenced to ten months and nine months in prison respectively. Both practitioners said that they would appeal.

Mr. Li Chenglong from Wenxi County was sentenced to 13 years in prison in 2011. He was imprisoned in the Jinzhong Prison, where he was persecuted and lost his ability to take care of himself. He was released in August 2017 after strong appeals by his son.

Officers arrested Mr. Li again on August 6, 2018, even though he was still unable to take care of himself, could not speak, and had a urinary catheter. He was first imprisoned in the Fifteenth Ward in the Jinzhong Prison, then the Xinkang Prison in Daiyuan City, also known as Shanxi Province 109 Hospital.

Mr. Li's wife, Ms. Wang Chunlan, was arrested in 2008 and held at the Xindian Women's Forced Labor Camp. She was abused and suffered from psychotic disorder as a result. She passed away soon after being released in 2009.