(Minghui.org) Mrs. Wang Shuqing, 80 years old, had been on high-blood-pressure medicine for 30 years by the time she visited her daughter in London in October, 2016. With her daughter's encouragement, she began to practice Falun Dafa and experienced the life-changing benefit of this traditional mind-body cultivation practice. After just one month, her blood pressure returned to normal. 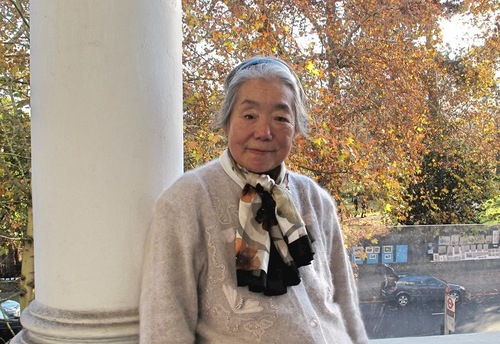 Looking at the healthy and energetic lady, one can hardly believe that Mrs. Wang was in a wheelchair two years ago when she visited her daughter. She shared, “No words can express my deep gratitude to Falun Dafa!”

Ms. Wang explained, “I had bad knees. My legs were so painful that I couldn't walk downstairs. To move around I had to use a wheelchair. My blood pressure was higher than 200. Sometimes I felt so dizzy that I couldn't stand. I had to lie down and keep my eyes closed.”

“I couldn't live one day without my medicine,” she continued, “which I kept next to my pillow, so I wouldn't forget to take it. As soon as I got up in the morning, I had to take my medicine, or I would feel terrible. All the medicine did was keep my blood pressure under control, instead of curing me. I had to take it to live.”

Mrs. Wang's daughter had been practicing Falun Dafa for some time. She told her mother how she had personally benefited from Falun Dafa, and taught her how to find information about this cultivation practice on the Internet.

Mrs. Wang was surprised by the information she found. “It turned out that the Chinese Communist Party (CCP) had poisoned people's minds by publicizing defamatory information. After I looked up the information myself, I found that Falun Dafa wasn't at all what the Party had said.”

Mrs. Wang started reading the book Zhuan Falun, the main book of Falun Dafa. She read it twice and thought, “Falun Dafa's Master has a pure heart! He hasn't written a single word against the government or about political pursuit. All he did was guide people to higher levels. He taught people how to cultivate their character and improve health. Isn't it great? How could the government oppose it, and slander it?”

Ms. Wang recalled, “My mind gradually changed. I started practicing in November, just one month after my arrival. I became more energetic. When I first started doing the exercises, my legs shook. I had to keep a chair close, so that I could sit down after each exercise. Slowly I got stronger and stronger.” 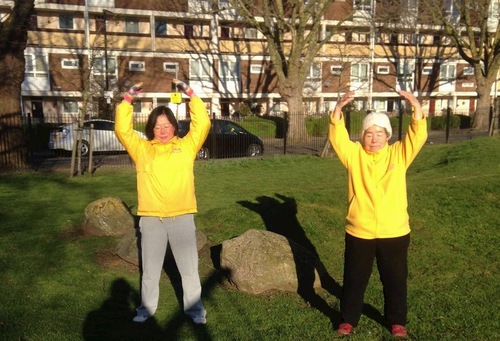 Mrs. Wang and her daughter doing the Falun Dafa exercises.

Mrs. Wang eventually got rid of the medications she had been taking for 30 years. “I brought all kinds of medicine when I came to London. I was so dependent on it. However, about a month after I started practicing Falun Gong, I no longer had any blood pressure problems. My muddled mind became clear. I tried a week without any medicine and I was completely fine. Another week passed, and I was still fine. I eventually got rid of all the medicine. As of now, it has been two years since I stopped taking anything.”

Practicing Falun Dafa has taught Mrs. Wang the great values of Truthfulness-Compassion-Forbearance and uplifted her spiritual realm. She said, “I have been happy since I stepped into Dafa cultivation practice. I used to take small things to heart, had a hard time accepting any negative comments, and was very self-conscious.

“For example, my daughter told me that the bowls I had washed weren't clean. I was upset and told her that she was nitpicking. But now, I think what she said was correct, and I should improve my way of thinking.”

Mrs. Wang feels so fortunate to have finally found this cultivation path. “When I was in China, I had the same dream over and over again for two years. In the dream, I was lost and wondered where my home was. I had the same lost feeling every time I had that dream. I stopped having this dream since I began to practice Falun Dafa.”