(Minghui.org) Forbes magazine published an article by Ewelina U. Ochab titled “Organ Harvesting in China and The Many Questions to Be Answered” on October 16, 2018.

In the article, Ochab stated that the claims that China's communist regime is killing prisoners of conscience, and in particular Falun Gong practitioners, to supply its organ harvesting industry, are supported by substantial evidence. 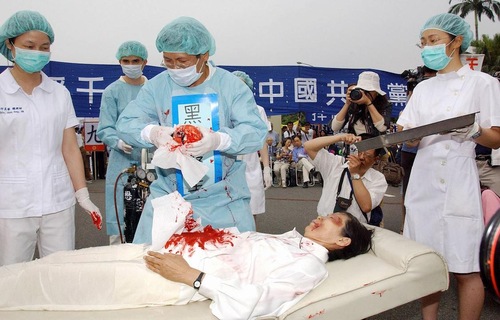 “For example, Principle 1 requires consent from the donor to organ removal for the purpose of transplantation. Principle 10 requires traceability of organ transplants and Principle 11 - that donation activities be transparent and open to scrutiny. By contrast, organ harvesting is the illegal practice of removing organs from individuals (whether dead or alive) without their consent,” Ochab wrote.

The article was apparently prompted by a U.K. Parliament event held on October 16, 2018, about organ harvesting in China, which according to the Forbes author was the third event of its kind organized at the U.K. Parliament. The claim that the Chinese regime is killing prisoners of conscience (particularly, religious minorities, including Falun Gong, Tibetan Buddhists, Uyghur Muslims, and unregistered House Church Christians) to supply its organ harvesting industry was on the agenda for discussion.

Ochab stated that even though these claims may sound unrealistic, the issue has already been the subject of investigations and hearings in the U.S. Congress and the European Parliament. She mentioned that both the U.S. House of Representatives and the European Parliament have passed resolutions to condemn the “systematic, state-sanctioned organ harvesting from non-consenting prisoners of conscience.”

“The claims of organ harvesting in China are supported by substantial evidence, including the 2016 report “Bloody Harvest/The Slaughter: An Update” published by David Kilgour, David Matas and Ethan Gutmann. The research of Kilgour, Matas and Gutmann was presented during the hearings of the Committee on Foreign Affairs, House of Representatives, on June 23, 2016, in U.K. Parliament and at several other hearings,” Ochab wrote.

“The research of Kilgour, Matas, and Gutmann sheds light on two important issues concerning organ harvesting in China,” she continued.

“Second, the report suggests that prisoners of conscience, including Falun Gong, Uyghurs, Tibetans, and House Christians became specifically targeted groups for the purposes of organ harvesting. In an oral evidence hearing of the Committee on Foreign Affairs, House of Representative, Gutmann explained how the practice of organ harvesting has been used as a method of persecution against Falun Gong members and to maintain the supply of the demand for human organs,” she wrote.

The Forbes article also suggested that independent investigations of organ harvesting in China are the first and most crucial step, and could provide the basis for prosecuting those involved.

“The Blessing of Being Criticized”