(Minghui.org) Today's news from China includes incidents of persecution that took place in 6 cities or counties in 4 provinces. According to this report, 5 Falun Gong practitioners were subjected to mistreatment during their detention, and at least 3 were illegally arrested. 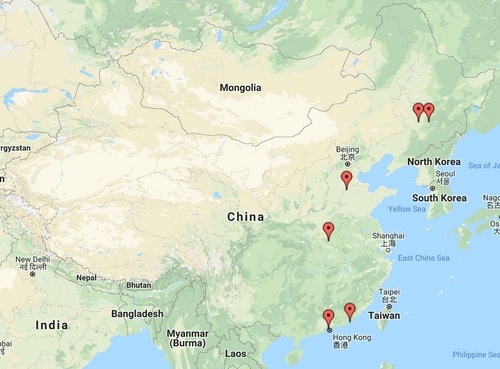 Ms. Wang Shufan was arrested on the afternoon of September 28, 2018, when she was distributing information about Falun Gong. The police ransacked her home and confiscated a printer and computer.

After being held in a lockup center for 13 days Ms. Wang was transferred to a detention center.

Ms. Lu Yafan, from Qijia Township in the Shuangyang District, was arrested at home on the afternoon of October 10, 2018. She was taken to the Tongyang Police Station, where she was photographed and had her fingerprints taken. Her family was allowed to take her home.

Ms. Dong Juan and Ms. Gao Guoxiang, 74, from the Lingcheng District were arrested when they were distributing Falun Gong materials on October 21, 2017.

Ms. Gao has been held in the Dezhou Detention Center for nearly a year. Her case was turned over to the Procuratorate, and she was sentenced to a four-year prison term and fined 20,000 yuan on October 15, 2018.

Ms. Duan Junli and another practitioner were arrested by Hudong Police Station officers on the afternoon of October 14, 2018, when they were talking to people about Falun Gong.

Ms. Xu Muqun, a teacher at the Liandong Middle School in the Chenghai District, was arrested on May 3, 2018. Her case was turned over to the Chenghai Court.

The Chenghai Education Department stopped paying her salary on September 21, and only paid her basic living expenses.

“Ethical Practices of a Doctor Who Cultivates Falun Dafa”