Ecuador: Learning about Falun Gong at the International Book Fair

(Minghui.org) Practitioners participated in the 11th International Book Fair on November 9-18, 2018. Many visitors stopped by the Falun Gong booth and learned the exercises. 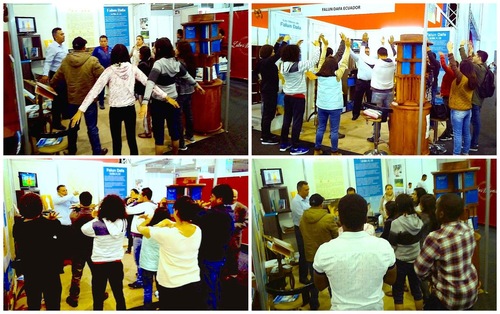 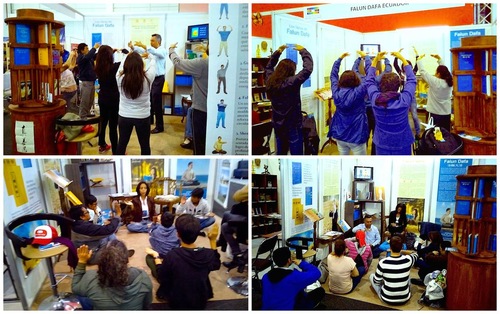 Many people learn the exercises at the book fair.

On the third day of the book fair, a staff member from the host company said he was curious to learn more about Falun Gong and came to the booth. When the practitioners began to demonstrate the exercises, he participated and learned all five sets. Afterward, he said, “I feel very relaxed after practicing the exercises. The pressure I felt has disappeared. I wish to continue practicing Falun Gong."

A relative of the Ecuadorian consul in China came to the booth to learn more about Falun Gong. A practitioner told him that they were about to demonstrate the exercises and suggested that he try doing them.

After he finished the first exercise, he excitedly told the practitioner, “The pain in my spine has disappeared! It feels like my spine has been straightened. It's great! I wish to keep practicing and to learn more about Falun Gong.”

A young man from Venezuela visited the booth. When the practitioners began to demonstrate the exercises, he joined them and learned all five sets. Afterward, he told the practitioners, “I could feel that there was energy in the Falun Gong booth, so I came here.”

He excitedly added, “This is an excellent opportunity and I cannot miss it. I have been looking for a way to become a better person. Thank you very much!”

Many visitors browsed through the main books Zhuan Falun and Falun Gong. Some people bought the books.

Two young men told a practitioner that they knew about the persecution of Falun Gong in China and they wished the practitioners good luck.

Two correspondents from the Department of Journalism, International University of Ecuador interviewed practitioners during the book fair. They also learned the exercises. 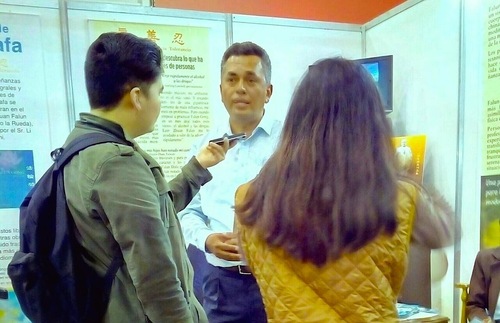 A practitioner is interviewed by a reporter from the Department of Journalism, International University of Ecuador

The weekend following the book fair, many people went to Carolina Park in the capital city, Quito and joined the practitioners in doing the five sets of exercises. They said that they would continue coming to the group practice site. 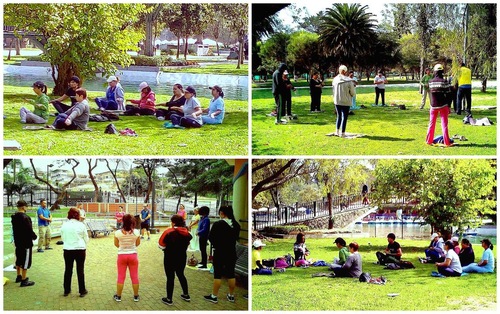 People came to Carolina Park in Quito to join the group practice the weekend after the book fair.

“To the Practitioners of Vietnam”

“A Hot-Tempered Youth Becomes a Gentle Father Through Cultivation”