Arrested Prior to 2008 Beijing Olympics, Liaoning Woman Detained and Tortured 10 Years for Her Belief

(Minghui.org) Ten years of imprisonment, more than 20 types of torture, and forced labor of over 12 hours every day—this is what Ms. Wang Sumei, a Falun Gong practitioner in Liaoning Province, had to endure. As she walked out of Liaoning Women's Prison on June 21, 2018, her sister could barely recognize her: her hair had turned gray, four of her teeth were missing and seven were loose, and her eyesight was blurry.

Although only 56, Ms. Wang could hardly take care of herself after returning home. She couldn't go out of the house by herself either. While relatives and neighbors who visited her felt sorry for the mistreatment she suffered for refusing to renounce her belief, they also admired her courage and determination.

Also known as Falun Dafa, Falun Gong is a spiritual system based on the principles of Truthfulness-Compassion-Forbearance. When the number of practitioners surpassed the number of communist party members, the Chinese regime banned Falun Gong in July 1999.

Ms. Wang used to suffer from migraines, gynecological problems, and other ailments. After using up the family savings, she borrowed money from relatives but could not cure her illnesses. Beginning to practice Falun Gong in 1998 was a turning point for her. All her ailments disappeared in a month, and she was happier than she'd ever been.

Four police officers came to her home at 4:30 a.m. on July 21, 2008. After taking her to the police station and interrogating her, they ransacked her home and confiscated Falun Gong materials. The following day, she was taken to the Shenyang First Detention Center.

Following instructions issued by the 610 Office in the Shenbei New District, the local procuratorate charged Ms. Wang on October 8, 2008. On the way to a hearing on November 5, 2008, a guard slapped Ms. Wang's mouth twice and kicked her so hard she had bruises on her legs.

In the courtroom, presiding judge Zou Donghui refused to allow Ms. Wang to defend herself and drove her family out. After being sentenced to 10 years in prison, Ms. Wang appealed to the Shenyang Intermediate Court. Presiding judge Zhou Xiaoshu upheld the original verdict on December 23, 2008.

Ms. Wang’s family hired an attorney for her and submitted a plea of not guilty to the Shenyang Intermediate Court. They never received a response.

Ms. Wang was taken to the Liaoning Women's Prison on March 3, 2009, first in Division 8 and later in the Elderly and Handicapped Unit in Division 11. An attorney from Beijing hired by Ms. Wang's family came to visit her on May 13 and 14. Prison director Yang Li refused out of hand to let him see her, so the lawyer could not accept the case or work on it.

The prison guards put the detainees into groups of three—if one of them misbehaved, all three were punished. To force practitioners to give up their belief in Falun Gong, the guards often put two thugs and one practitioner together. To avoid punishment, the thugs often mistreated practitioners.

Because Ms. Wang refused to give up her belief, she was tortured in more than 20 different ways. She was deprived of food, forced to stand for long periods of time, tied up, beaten, deprived of sleep, subjected to freezing conditions, force-fed, held in solitary confinement, restrained with two handcuffs, restrained on a “death bed,” doused with freezing water, slapped in the face, dragged by the hair, hung up high, silenced by having her mouth sealed with tape, waterboarded, made to do over 12 hours of forced labor every day, deprived of access to a toilet, deprived of access to water to wash herself, not allowed to purchase personal care items, not allowed to have family visits, and humiliated. The inmates also stomped on her back. She was tortured incessantly for 10 years. Ms. Wang's mouth often bled because she had been slapped. Her weight sometimes dropped to about 80 pounds.

After arriving in Division 8, Ms. Wang only had one regular meal before she was given starvation rations for three months. She was still forced to work 12 hours a day, from 7 a.m. to 7 p.m. After that, she was forced to stand until 1 a.m. every day.

Two inmates, including one who was incarcerated for homicide, doused her with freezing water. They made her stand in a basin filled with freezing water at the same time. They slapped her in the face and pinched her thighs every day. Even when Ms. Wang was doing forced labor, the inmates sometimes beat her for no reason.

November in northeastern China is always frigid. Because Ms. Wang did not give up her belief, the other inmates only let her wear a single layer of clothing and no socks.

The guards changed the inmates assigned to Ms. Wang's team from time to time. Some of them hung her up high enough that her feet were off the floor. Occasionally, they pulled her by her hair and pushed her head into a bucket full of water, nearly drowning her. 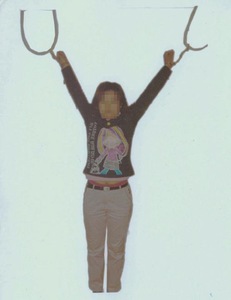 Torture illustration: Hanging up high with feet off the floor 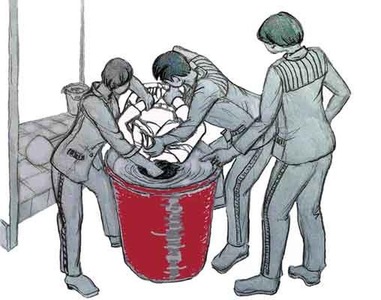 Torture illustration: Waterboarding in a water bucket in the bathroom

Another inmate imprisoned for homicide tortured Ms. Wang by forcing her mouth open and pushing on her teeth. Although there was no visible injury, Ms. Wang's teeth loosened and started to hurt.

One inmate slapped Ms. Wang in the face 27 times, while another inmate counted. This happened so often that Ms. Wang's mouth often bled.

To keep Ms. Wang from doing the Falun Gong exercises, the inmates often handcuffed her behind her back even while she slept. The brainwashing was intense. One time they deprived her of sleep for more than 10 days while reading slander about Falun Gong aloud to her. While Ms. Wang was asleep, they once put her fingerprint on a document that said she had stopped practicing Falun Gong. 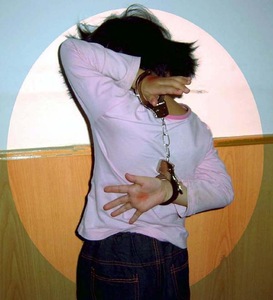 Torture reenactment: Handcuffed behind the back. 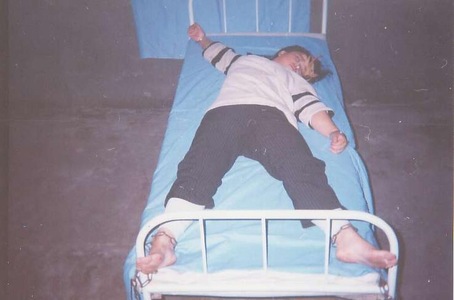 Torture reenactment: Cuffed to a bed in a painful position.

The guards pressured the inmates to torture Ms. Wang. The inmates assigned to watch her often said that they would have been punished if they did not comply.

In time, however, Ms. Wang's determination changed the situation. She was able to do the exercises, and the other inmates just ignored her.

Given the incessant physical and mental abuse, plus 12 hours of forced labor every day and a poor diet, Ms. Wang was diagnosed with low blood sugar. As a result, she was transferred to the Elderly and Handicapped Unit in Division 11 on January 25, 2012.

The forced labor in Division 11 was twisting cotton swabs during production. Some inmates did not wash their hands after using the toilet, while others had to work even if they were ill. Ms. Wang was doing the exercises late at night, and the guards and inmates tried to stop her. After Wu Yan was appointed as an assistant manager of Division 11, she instructed inmates to continue to torment Ms. Wang, including holding her in solitary many times.

The solitary confinement cell was the size of one bed with a small window near the ceiling, It was cold in the winter and hot in the summer. The person confined is not allowed out for any reason. Ms. Wang was handcuffed behind her back at all times, even during meals or when she went to sleep. Wu interrogated her once a week, pressuring her to renounce her belief. Seeing that Ms. Wang refused to give in, Wu ordered inmates to restrain her with two handcuffs and threatened to keep her in solitary.

Handcuffed behind her back, Ms. Wang was unable to eat, so she went on a hunger strike. Three days later, guards took her to the prison hospital to force-feed her. She was tied to a bed 24 hours a day—a form of torture called the death bed. Ms. Wang was tortured this way while being force-fed for 42 days. 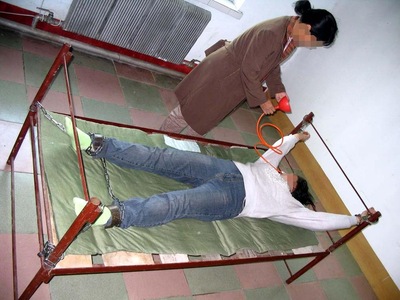 Because she did the exercises, she was put in solitary at least four times in total. When she was back in a regular cell, the other inmates continued to torture her. To stop Ms. Wang from doing the exercises, Wu often instructed inmates to handcuff Ms. Wang or tie her to the bed. One time, Ms. Wang was tied up in bed at night for an entire month. In addition, Wu told all the inmates not to speak with Ms. Wang.

But Ms. Wang did not give up. She continued to do the exercises whenever she could. In the end, the guards allowed her to meditate in bed.

What Ms. Wang suffered for those 10 years is beyond description. In addition to the complete loss of respect and self-esteem, the physical and mental abuse were intense.

During those 10 years, Ms. Wang's family was denied the right to visit her many times. At those times, Ms. Wang was being tortured the worst, and the prison officials did not want the outside world to know.

Ms. Wang was not alone. Three other practitioners in Shenbei New District who were arrested around the 2008 Olympic Games also suffered tremendously. During their trials on December 1 and 9, 2008, Mr. Xi Changhai was sentenced to 11 years in prison; Mr. Sun Yushu, to 8 years; and Mr. Huo Defu, to 6 years. Mr. Xi had a stroke and kidney failure from being tortured in prison and many other health problems. He died on September 25, 2015.

Unreasonable Judgment Handed Down in Northern Shenyang City in 2008

“Ms. Zou from Chongqing Sent Back to Prison for Talking to People about Falun Dafa”