(Minghui.org) Today's news from China includes incidents of persecution that took place in 9 cities or counties in 7 provinces. According to this report, 3 Falun Gong practitioners were subjected to mistreatment during their detention, and at least 19 were illegally arrested. 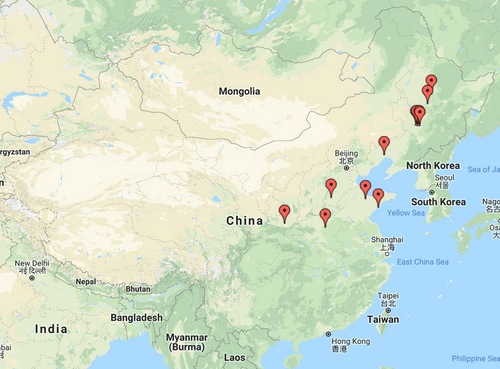 Ms. Wang Xiuying from the Changchun Economic Development Zone was arrested on the morning of October 12, 2018. Her home was ransacked.

Liu Xiangfei slapped Ms. Zhao on the face, and kicked her chest. When Ms. Zhao fell to the ground Zhu Pan straddled Ms. Zhao's body, grabbed her hair and viciously beat her. The officers demanded that Ms. Zhao name other Falun Gong practitioners who were producing Falun Gong materials.

Ms. Zhao's home was ransacked. She was released after her family paid 4,000 yuan.

Mr. Wang Enguo and his wife Ms. Zhou Xiuzhi, from the Changchun Automobile Industrial Development Zone, were arrested by officer Li Guojun from the Domestic Security Division, the director of Anqinglu Police Station, and other officers on the morning of October 12, 2018. The officers confiscated Falun Dafa books, a printer, and computer.

Ms. Zhou was held in the Weizigou Detention Center for 15 days. Mr. Wang's whereabouts are unknown.

Mr. Li Shaoping from the Pingdu area was reported to the authorities for talking to people about Falun Gong on the morning of October 12, 2018. He was arrested and taken to the Pudong Detention Center.

Ms. Wu Jinghua, Ms. Song Hongwei, and Ms. Gao Jinshu, from the Beilin District, were arrested on the evening of October 9, 2018. Their homes were ransacked.

The three practitioners whereabouts are unknown.

Ms. Su Cuizhi from Dehui City recently went to visit her relatives in Huludao City, Liaoning Province. She was arrested by the Qinhuangdao City police at a train station.

Ms. Bao is being held in the Harbin City No. 2 Detention Center, where she suffers from heart problems as a result of mistreatment.

Mr. Dong Tianfu, in his 60s, from Dongcundian Village, Liangbei Town, Yuzhou City, was arrested at home by Domestic Security officers on the morning of October 12, 2018. A computer, printer, photos of the founder of Falun Gong, and all his Falun Dafa books were confiscated.

Ms. Ge Chunying was taken to the Liaoning Province Women's Prison in August 2018.

Ms. Wang Hongyan, Ms. Du He, and Ms. Qu Li were arrested when they were studying the Falun Gong teachings in Ms. Liu's home in Hualian Residential Community's family quarters of Changchun No. 2 Hospital, on the morning of October 12, 2018. They were taken to a detention center.

“Imprisoned Man Tortured for His Faith, Family Denied Visits Upon Discovering His Injuries”