Images of Galaxies Deepen My Understanding of Dafa

(Minghui.org) Even though I had read the book Zhuan Falun and some of Master's other teachings years ago, I did not immediately begin practicing Falun Dafa. After I started truly cultivating myself last year I began to understand Master's teachings.

I did not understand why Master talked about the cosmos' composition in his teachings, so I quickly read through those sections when I studied the Fa. I only understood that the cosmos was enormous, but had no idea how enormous it was and never really thought about it.

A couple of months ago I told my mom that I had finished reading all of Master's teachings. I said that I would read them repeatedly, but I couldn't understand the parts about the composition of the cosmos. What happened afterwards made me feel that Master was enlightening me and encouraging me to do the three things diligently.

An article in a Minghui journal states that the cosmos is enormous. There are so many stars and planets, how could humans be the most intelligent? The article mentioned that Buddhas, Taos and Gods are not superstitions but actually exist and that they have superior wisdom. I thought the article was great, and that I should tell people about it when I tell them about Falun Dafa. I became interested in the cosmos and began to wonder about the new findings in astronomy. To my surprise, I learned that there are approximately 7 x 1022 stars! 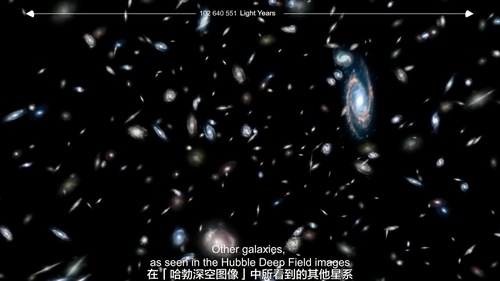 A few days later, when I had some guests I chatted with them about the universe. I said, “The stars look tiny, but they are so much bigger than our Earth. There are so many stars in the universe that we'll never be able to explore them all. There are 7 x 1022 stars. Astronomers estimate the number is greater than the grains of sand on Earth. Think about it. Aren't there other forms of lives and those with higher intelligence in the cosmos? Actually some higher level lives are what we call Buddhas, Taos and Gods.”

I also talked about the civilizations that existed before history and parallel universes, and told them that the size of the cosmos is beyond imagination. They listened quietly, full of curiosity, and didn't think it was ridiculous. This topic became a good way to widen people's thoughts and introduce the basic facts about Falun Dafa.

One's Life Span Is Actually Just a Flash of Time

A couple of days later, I watched a video online about how enormous the cosmos is and how minor humans are. The images captured by the Hubble Space Telescope showed the galaxies as if there were Falun that was rotating all over space. I was moved by the scenes.

That evening my mother asked, “What do you think about this?”

“There are others who say, 'My coming here to the ordinary world is just like staying at a hotel. I’m only going to stay here a few days and then leave in a hurry.' Some people just dread leaving this place, and they’ve forgotten their own homes.” (The Ninth Talk from Zhuan Falun)(Translation Edition (Feb. 2003, North America))

I had memorized this paragraph, but I didn't know what to say when she asked me. When I read this paragraph the next day, I remembered another sentence from Master's teaching,

“You will live as long as this universe.” (Chapter III Cultivation of Character from Falun Gong) (7th Translation Edition, 2016)

I was greatly shaken. I remembered the video and it dawned on me that humans feel that living to their 80s or 90s is a long life, and living over 100 is miraculous. But, compared to the life of the universe, isn't this like staying at a hotel for a couple of days? As cultivators, our goal is to return to our true origin and become Buddhas, Taos and Gods.

Master has told us,

Our attachments and desires are so trivial compared to the boundless cosmos. How could we give fame, fortune, emotion, lust or grievances any importance?

“Yet as a practitioner you will find the things that people take seriously to be very, very trivial—even too trivial—because your goal is extremely long-term and far-reaching. You will live as long as this universe. Then think about those things again: It doesn’t matter if you have them or not. You can put them all aside when you think from a broader perspective.”(Chapter III Cultivation of Character from Falun Gong) (7th Translation Edition, 2016)

When we clarify the facts of Falun Dafa to well-educated people, we could mention the facts about our universe. Many people, especially Chinese people, have been heavily influenced by atheism which is espoused by the Chinese Communist Party (CCP). Their minds have been very tightly confined. We can gather some accurate and well-supported scientific data and use a scientific perspective to widen people's thoughts and further tell them about Dafa.

“What’s it got to do with blind belief? It can be explained with scientific theory.” (The Second Talk from Zhuan Falun) (Translation Edition (Feb. 2003, North America))

Besides the astonishing number of stars and galaxies, and 7.7 billion people living on Earth, which is a dust-size planet in the cosmos, we can mention the fact that all stars have their independent orbits which are in amazing order.

We can also tell people about the existence of heaven. Just days after space shuttle astronauts repaired the Hubble Space Telescope in mid December of 1993, the giant lens focused on a star cluster at the edge of the universe – and photographed heaven.
As a matter of fact, so many things in our existing world can't be seen by our naked eyes, like air, germs, radiation, viruses, time, thoughts, etc. However, they do exist. The reason why humans can't see gods is because we haven't reached the realm of gods. You have to meet the criteria of that level before you can see them.

The CCP doesn't allow people to have freedom of belief. Throughout the thousands of years of Chinese history, people believed that good will be rewarded and that evil is punished. However, the CCP doesn't believe it. It dares to do anything and has caused the deterioration of morals in China. Every Chinese has suffered the consequences, including unsafe food and poisonous products. More than 300 million people have quit the communist organizations. Quitting the Party is the best way to void the vows we made to give our lives for the cause of communism.

I suggest publishing more videos about space and time on the Minghui website. They broaden the views of ordinary people and help Dafa practitioners realize how great our mission is. Some practitioners have an extensive knowledge of astronomy. Putting together videos with Dafa practitioners' music will make our truth clarification more effective.