(Minghui.org) Practitioners in Bali, Indonesia held a peaceful protest near the Chinese Consulate General in Renon, Denpasar on October 22, 2018. They displayed banners across the road from the consulate with the messages “Falun Dafa is good” and “Stop the Persecution of Falun Gong.” Many passersby expressed their support for practitioners' efforts to bring an end to the 19-year persecution of Falun Gong in China. 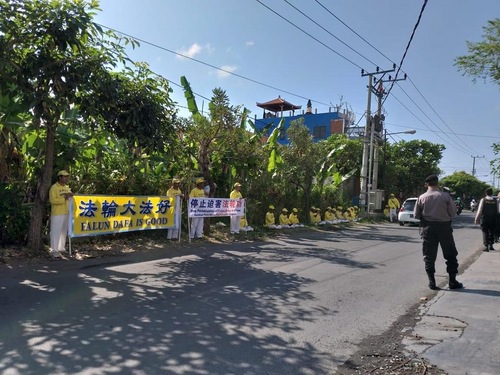 Falun Gong practitioners in Bali held a peaceful protest near the Chinese Consulate General at Renon, Denpasar on October 22, 2018. 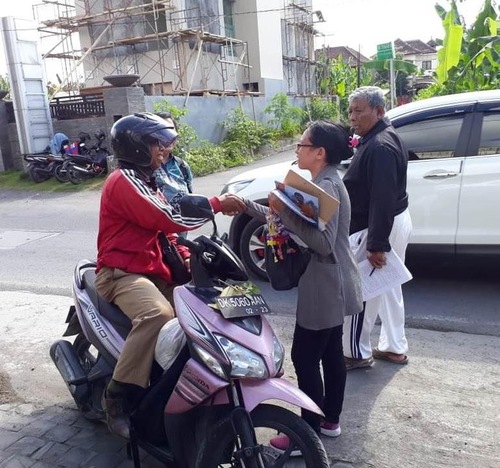 A motorist stopped to lend encouragement and said, “Hang on! Continue (your endeavor) for justice.”

The activity was held in response to the Chinese Consulate's recent wave of propaganda to defame Falun Gong to local governments. Practitioners drew attention to the benefits of the practice and also raised awareness of the persecution in China including the state-sanctioned crime of forced organ harvesting from living Falun Gong practitioners.

Their efforts were met with a great deal of encouragement from the public. One man stopped to shake a practitioner's hand, and said, “Hang on! Continue (your endeavor) for justice.”

The mood throughout the event was compassionate and peaceful. The police officers on duty smiled as they accepted the practitioners' pamphlets.

“Stories from Talking to People in China About Falun Dafa”