Sweden: “This Meditation Practice Must Be the Best”

(Minghui.org) The months of May through October make up the peak tourist season in Sweden. Swedish Falun Gong practitioners take this opportunity to reach out to visitors from around the world, and every morning near the entrance to the Stockholm City Hall they display posters and banners to introduce this mind-body meditation practice and raise awareness of the ongoing persecution of the practice in China.

Their informative display draws the attention of many tourists, who stop to learn more about the Chinese Communist Party's (CCP) persecution of Falun Gong and the CCP's crimes of harvesting organs from living Falun Gong practitioners and other prisoners of conscience for profit in organ transplantation surgeries. 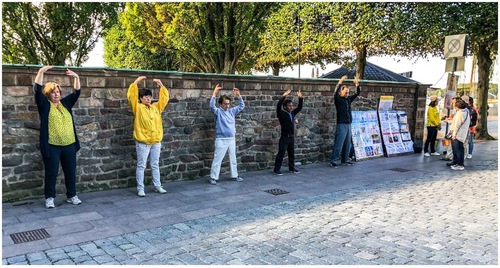 Falun Gong practitioners demonstrate the exercises near the entrance to Stockholm City Hall. 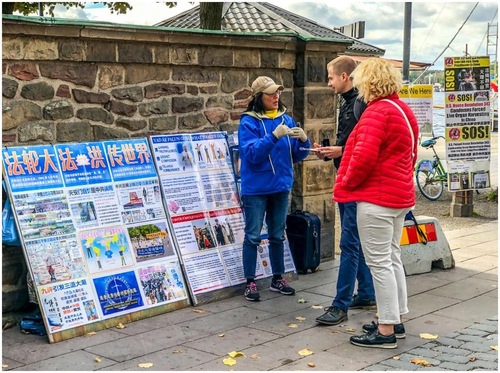 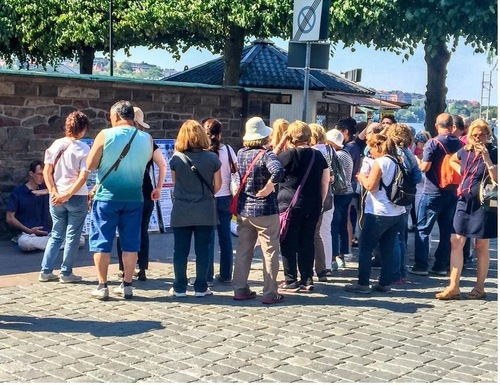 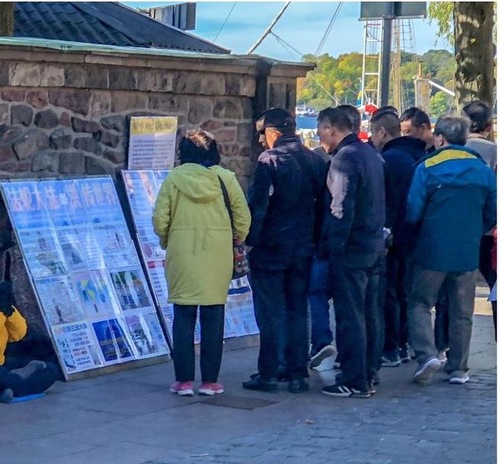 Through the efforts of Falun Gong practitioners to raise awareness, more and more local people and tourists have come to know about Falun Gong and fully support the practitioners in their efforts to bring an end to the persecution.

“I Want to Be a Member of Your Group”

Peter, a middle-aged Swedish man, passed by the practitioners' venue one day in July while on vacation. He accepted a flyer and read all the posters, then talked with a practitioner for quite a while.

When he learned that Falun Gong had spread to more than 100 countries and has the ability to heal illness, Peter expressed regret that he had only just now come to know about the practice. He thanked the practitioners for holding the event and said he felt sad to know that such a good practice was banned in China. He was especially concerned that many innocent people are being brutally persecuted and even killed through the CCP's organ harvesting atrocities.

Peter was touched when he learned that practitioners have worked tirelessly to end the persecution for over 19 years. He said, “You are the best people that I have met in this world. I support you. I want to be a member of your group.”

He asked practitioners to help him order a copy of Zhuan Falun, the main book of Falun Gong, and said he wanted to start practicing Falun Gong. He then often came to the tourist site, and when the activities were over he helped practitioners pack up the information boards and other materials and put them in their vehicles.

From the Mid-Autumn Festival into the start of October, the number of tourists from Mainland China has increased significantly.

When a large tour group with around 50 Chinese tourists walked over to where the practitioners were holding their activities one day, whispers could be heard from within the crowd, “Wow, Falun Gong, Falun Gong!” “Falun Gong [practitioners] really are everywhere!” And then, “Don't take their newspapers.”

From among the crowd a woman's voice could suddenly be heard, “What about Falun Gong? It's just their personal faith. It's not illegal to take a newspaper! What are you scared of? I will take one!”

The middle-aged woman took a newspaper and later handed it back to a practitioner and said, “I know that your newspaper and other materials are all printed with your own money. I understand the truth about Falun Gong. [Doing these things] for so many years, it's really not been easy for you. I just want to thank you. None of us dare to do the things you are doing. I sincerely admire you. You have put in all this effort for all these years for us, China's common citizens. China's future depends on Falun Gong.”

She told practitioners that she had already quit the communist party, and that she had told her son, who is now studying in Japan, not to return home, because the Chinese regime is too evil. As she walked away from the practitioners' event site, she could still be heard saying, “Thank you, thank you to you all!”

“This Meditation Practice Must Be the Best!”

A middle-aged man viewed the posters carefully one day in early October and then chatted with practitioners. He told them he had passed by their display boards while out running and felt the peaceful energy field. He decided to stop by to learn about the meditation practice and the persecution.

He was appalled by the CCP's brutal persecution of Falun Gong and the organ harvesting from living Falun Gong practitioners and other prisoners of conscience. He said, “This is horrible!”

He said he had thought about why the CCP persecuted Chinese people and concluded that the Party was just so evil that it was capable of committing any wrongdoing – as exemplified by the long and brutal persecution of Falun Gong.

Then he said, “This meditation practice must be the best. I want to practice it.”