(Minghui.org) Today's news from China includes incidents of persecution that took place in 9 cities or counties in 6 provinces. According to this report, 16 Falun Gong practitioners were subjected to mistreatment during their detention, and at least 6 were illegally arrested. 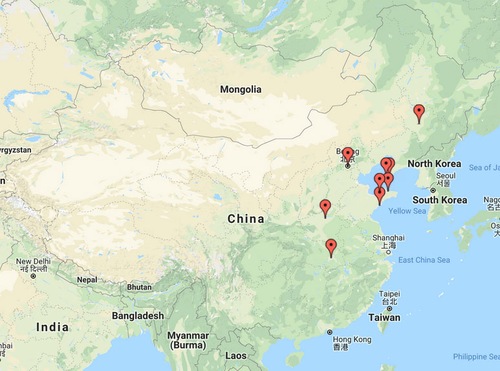 Except for Mr. Liu, the other eight practitioners were tried by the Jinzhou Court on the morning of September 25.

Ms. Chen Meijuan and another elderly practitioner were arrested on the morning of September 16, 2018, when they were talking to people about Falun Gong in Yandao Village. They were taken to the Jinjiajie Drug Rehabilitation Center for physical examinations that afternoon.

Both practitioners failed the physicals, and were later taken to the No. 3 Police Hospital for further exams, but they failed again.

The drug rehabilitation center refused to accept them, and they were released.

Ms. Gan Xiumei from the Wuchang District was reported to the police by security guards when she was talking to people about Falun Gong in Yongwang, Hanyang District on September 25, 2018. She was arrested by Hanyang Police Station officers, and taken to the Erzhigou Women's Education Center for five days.

Officer Wang Xian and others from the Dajijia Neighborhood Police Station, Yantai Development Zone, broke into the home of Ms. Zhong Qingxia's mother and attempted to arrest her mother on the morning of September 27, 2018.

Ms. Zhong's mother and two younger sisters, who do not practice Falun Gong, were at home at the time. They tried to stop the officers from taking photos and ransacking the place. The officers arrested the eldest sister.

Ms. Xu Guihua was arrested by Dagang Police Station officers from the Shibei District on October 16, 2017.

Ms. Xu was in critical condition, so Li Jianjun from the Shibei District Court, and Ms. Xu's family member went through the procedure of securing Ms. Xu's release on bail in the emergency room, at the East Section of the Affiliated Hospital of Qingdao University Medical College, on September 5, 2018.

Ms. Xu was taken to the detention center hospital and this affiliated hospital for emergency treatment. After the physicians twice issued a “critical illness” notice, the Qingdao City Public Security, Procuratorate, and court released Ms. Xu on bail.

Mr. Yu Xianrong and Mr. Lu Yonghua were also arrested at the same time as Ms. Xu. They are still being held in the Pudong No. 2 Detention Center.

Elderly Ms. Yang Guihuan, from the Hi-Tech Industry Development Zone, Pukou District, was arrested by Yanjiang Police Station officers on the evening of September 11, 2018. Her home was ransacked.

Ms. Yang was taken to the Pukou Detention Center.

Mr. Li Hongyan was taken to the Changchun City No. 4 Detention Center.

Ms. Li Kun from the Xicheng District was arrested at home on the afternoon of September 15, 2018. Her mother, who is over 90 years old, was left unattended.

Ms. Wang Yonghua, from Dingjiatong Village, Xinzhuang Town, was arrested at home by five Bianfang Police Station officers on the morning of September 14, 2018. The officers ransacked the place and confiscated her Falun Dafa books.

Ms. Wang was taken to the Zhaoyuan Detention Center for five days. She has since returned home.

Ms. Hu Xiujuan was arrested by officers from the Zhengzhou City Police Department, Wulipu Police Station, and personnel from the Xinkang Residential Community on the morning of September 27, 2018. Her home was ransacked.