(Minghui.org) At a rally in Vienna on October 1, 2018, elected officials gave speeches in support of Falun Gong and spectators signed a petition calling for an end to the brutal persecution in China, now in its 19th year.

After the rally, the Tian Guo Marching Band led a march through Vienna's government office and business districts. Crowds of people were attracted to the activities and expressed their support. 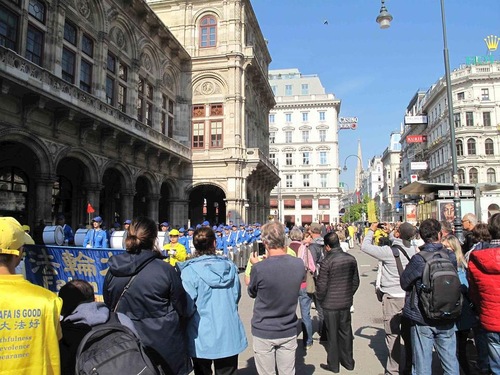 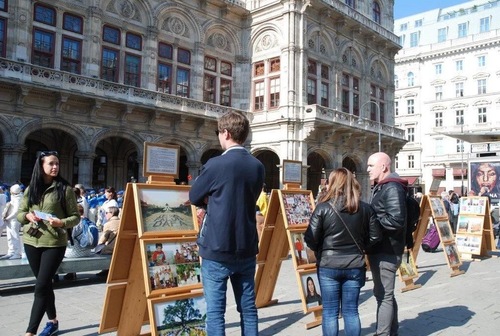 The photo exhibition exposing the persecution of Falun Gong in China by the communist regime. 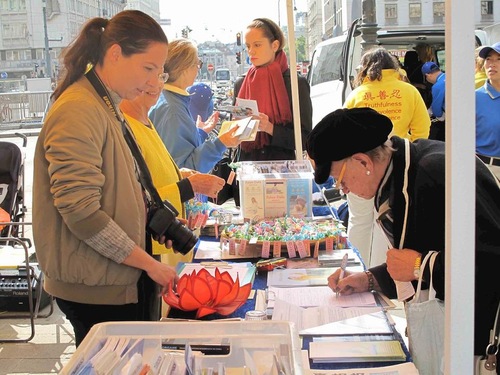 Members of the public sign a petition calling for an end to the persecution of Falun Gong. 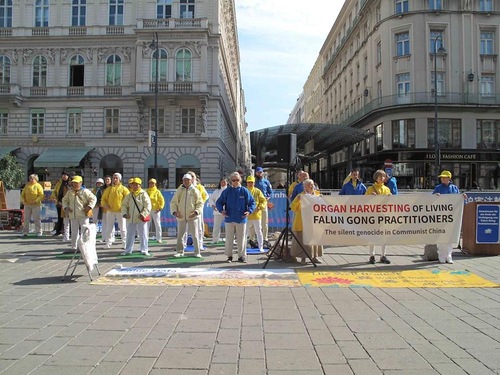 Ms. Caroline Hungerlaender, a member of the Vienna Landtag (the state legislature) and the Vienna Municipal Council, gave a speech at the rally in which she wished practitioners great success.

Ms. Hungerlaender said that through her interactions with Falun Gong practitioners, she felt that practitioners were very positive and kind. She thought it was very important to openly and publicly express her support. She felt Austria needed to bring up human rights issues to China often and to do its best as a nation to help stop the persecution of Falun Gong. 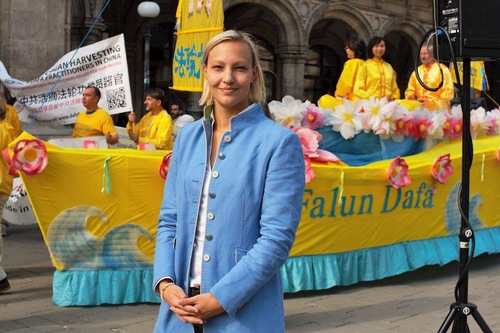 Ms. Caroline Hungerlaender, a member of the Vienna Landtag and the Vienna Municipal Council, gave a speech at the Falun Gong rally.

Ms. Faika Anna El-Nagashi, a member of Gemeinderat and of the Landtag of Vienna, couldn't attend the rally, but sent a letter of support. Her letter stressed the importance of condemning human rights violations. She stated that human rights should never be sacrificed for the sake of economic development or partnerships, and the systematic persecution of a group of people based on their belief was unacceptable. 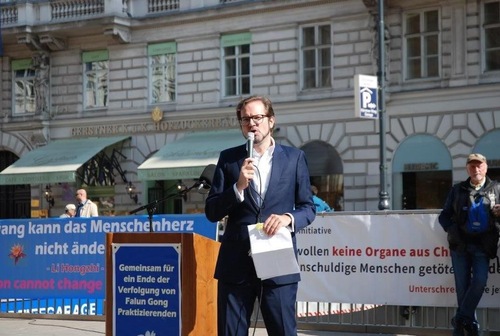 Host of the rally Florian Godovits introduces Falun Gong and the significance of the rally.

A Chinese man who had lived in Vienna for more than 30 years said that Falun Gong must be effective because it was practiced by so many people. He plans to learn the exercises at the local practice site. He had read the Nine Commentaries on the Communist Party and understood the wicked nature of the Chinese Communist Party (CCP) very well. He said,“The CCP is a dictatorship. It has persecuted you, so you have to work against the persecution. It has persecuted 1.3 billion Chinese people, but you have been able to establish yourselves on the international stage. That's amazing. I believe the CCP's days are numbered.” He also decided to quit the Youth League and Young Pioneers, two Communist organizations he had joined in China when he was young. 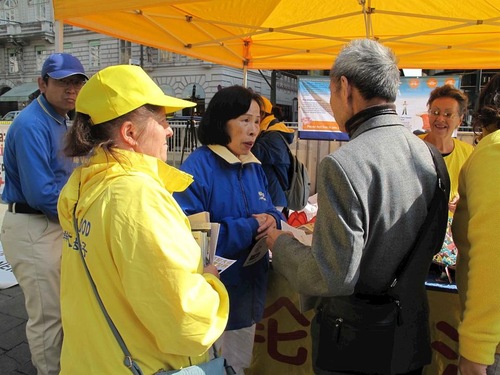 A Chinese man quits the Youth League and the Young Pioneers. 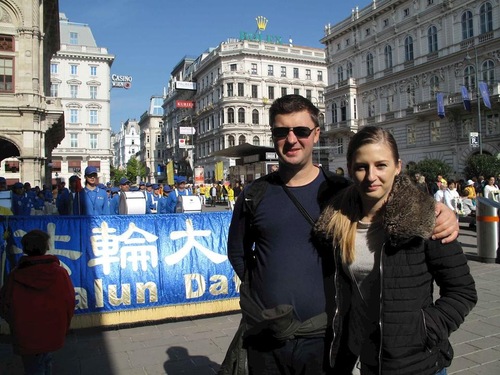 A young couple from Romania are happy to learn about Falun Gong.

A young couple from Romania had seen large-scale Falun Gong activities in Prague a few days earlier and were pleasantly surprised to come across the Falun Gong marching band in Vienna. The woman, Sabina, said, “More people should know what's happening in China. Romania cast away Communism in the 1990s. My parents told me about what happened under Communist rule. I can't believe such persecution is still happening in 2018.” 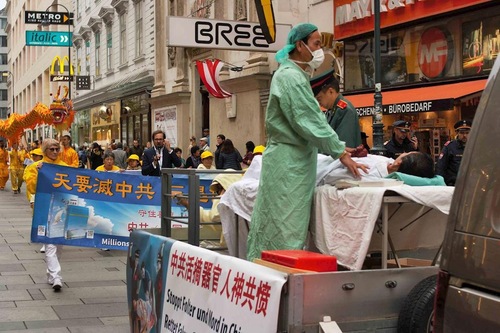 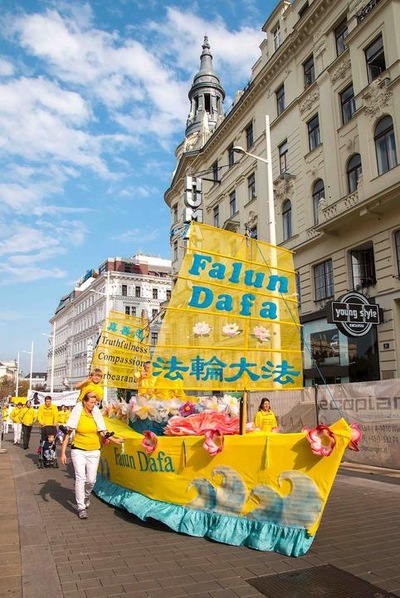 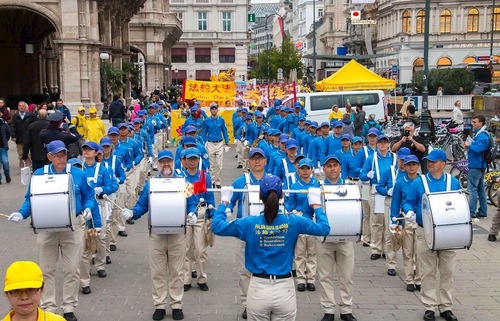 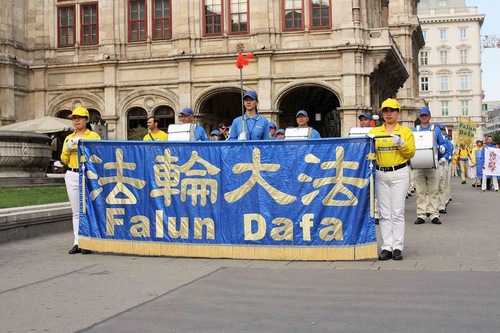 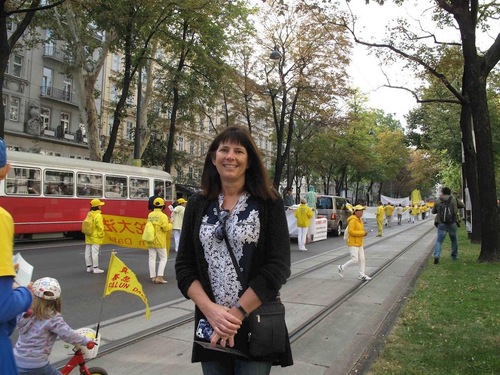 Lin from the United States praises Falun Gong practitioners' peaceful way of exposing the persecution and encourages practitioners to keep up the great work. 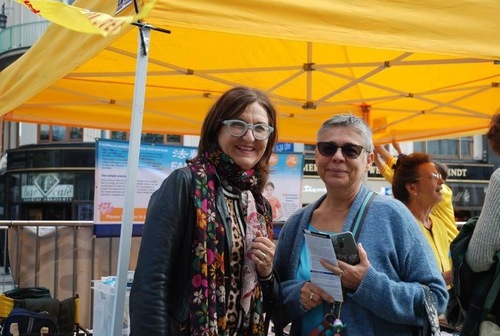 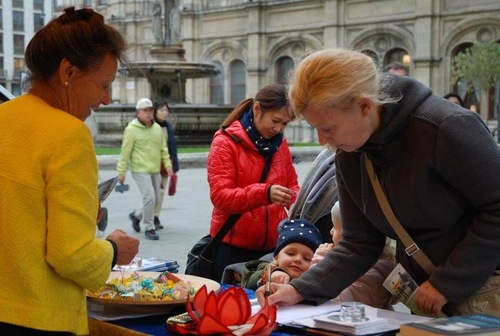 A lady named Monika signs the petition after seeing the German words for “Truthfulness-Compassion-Forbearance,” which are the guiding principles of Falun Gong.