(Minghui.org) Today's news from China includes incidents of persecution that took place in 12 cities or counties in 8 provinces. According to this report, 8 Falun Gong practitioners were subjected to mistreatment during their detention, and at least 25 were illegally arrested. 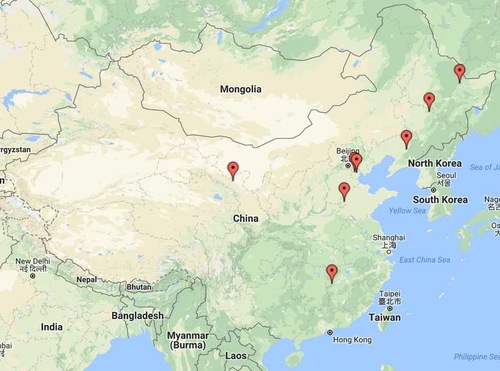 Mr. Quan Mingqi was sentenced to nine years and held in Benxi Prison. His term ended in September 2016.

During the nine years, Mr. Quan endured extensive abuse and humiliation. In June 2008, he was severely beaten for 7 hours straight by four inmates. The beating was instigated by Zhao Ye, a division head of the No. 3 Ward guards, to try to force Mr. Quan to renounce Falun Gong. Mr. Quan sustained multiple injuries. His legs were covered with bruises, and he could not walk.

Ms. Liu Hailan and Ms. Wang Huidong from Hanji Town in the High-tech Zone were arrested in early December 2017 for talking to people about Falun Gong. They have been held in the Liaocheng City Detention Center.

Four practitioners were reported for talking to people about Falun Gong in Huaijia Township. They were arrested by officers from the Daling Town Police Station on December 31, 2017. They were held in the Yushu City Detention Center for 10 days.

Ms. Wang Ping, Ms. Wang Juan'e, and Ms. Chu Yan from the Tanggu District in the Binhai New Area were arrested and their homes were ransacked on December 28, 2017. They have been held in the Zhaojiadi Detention Center.

Mr. Luo Shiliang from Shanggao County was taken to Hongdu Prison on December 27, 2017. His wife Ms. Wu Jinying will be taken to Jiangxi Province Women's Prison on January 3, 2018. They were each sentenced to four years.

Ms. Du Guihua and Ms. Zhang Yingchun were taken to the Hegang City Detention Center on December 30, 2017. It was the sixth time that Ms. Du Guihua has been arrested.

Ms. Qiu Fenglan, 72, went to distribute Falun Gong materials on the afternoon of October 13, 2017. She still has not returned home.

Six local practitioners were sentenced to prison in December 2017, after having been detained for more than one year.

The six practitioners were arrested on October 6, 2016, and appeared in court on July 13, 2017. Ms. Xu and Mr. Cai had lawyers enter not guilty pleas on their behalf; the others testified in their own defense.

The presiding judge convicted them in mid-December 2017.

The practitioners remain in the local detention center, where they have been beaten.

Mr. Zhang Mengjie was sentenced to 5 years and fined 20,000 yuan for refusing to renounce Falun Gong.

The 63-year-old Dalian City resident appeared in court on April 10, 2017, and her lawyer entered a not guilty plea on her behalf. The presiding judge adjourned the session without issuing a verdict, and he hasn't scheduled any new hearing to move the case forward.

This is not the first time that Ms. Zhong has been targeted for her faith. Prior to her latest arrest, she has been detained seven times for a total of 8 years.

Ms. Li and Mr. Zuo both went on a hunger strike to protest the illegal detention. According to insiders, Ms. Li has lost a significant amount of weight.

Mr. Zuo's son and lawyers both requested he be released and the case against him dropped. They still have not received any response from the police.

Ms. Yan Shufang was sentenced to four years in prison and transferred to Jilin Women’s Prison in the middle of December 2017 after being detained for about 20 months. Antu County Court did not inform her family when the verdict was decided. They informed the family after Ms. Yan was transferred to prison.

Ms. Yan Shufang and four other practitioners were tried on June 13, 2017. Ms. Yan’s lawyer was not allowed to enter the courtroom. None of the five practitioners was represented by a lawyer. The proceedings lasted less than two hours. Ms. Yan told the judge that she was interrogated with torture by the Angu Domestic Security Division.

“Search Within to Resolve Issues”