(Minghui.org) Today's news from China includes incidents of persecution that took place in 20 cities or counties in 10 provinces. According to this report, 12 Falun Gong practitioners were subjected to mistreatment during their detention, and at least 22 were illegally arrested. 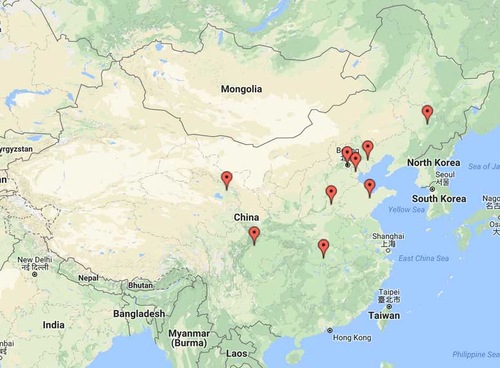 Mr. Li Yongquan was arrested at his rented home on the morning of December 28, 2017. His home was ransacked.

Ms. Li Guiying from Laogou Village, Gehetou Township, was arrested at home on the morning of December 24, 2017. She was taken to the Qinglong Detention Center.

Ms. Liu Shuling from Shuangdingzi Village, Kouqian Town, was arrested in 2014 when she was out distributing Falun Gong materials. Her whereabouts are unknown.

Ms. Wu Qinchai from Anyang City, Henan Province, went to visit her mother in Guancheng Town, Shen County, Shandong Province at the end of November 2017. The Anyang police pried open windows of her mother's home and arrested her.

Mr. Wang Bin was arrested on May 22, 2017. His case was returned to the police department by the Procuratorate for the second time on December 26, 2017. He is still being held in the Jiangmen Detention Center.

Mr. Xu Zhonglong was reported for distributing Falun Gong materials in a farmers market on December 25, 2017. He was arrested and placed under administrative detention for 15 days.

Ms. Liu Wenqin was given a three-year prison term by the Qingzhou City Court on December 19, 2017.

Ms. Zhao Xuejing and Mr. Sun Lihao remain detained even though the local procuratorate has returned their case to the police three times.

The two Dandong City residents were arrested on May 12, 2017 for distributing Falun Gong informational materials. The local Jingu Detention Center initially declined to admit Ms. Zhao because of her high blood pressure, but they gave in when an officer said, "If she has to die, she must die in the detention center."

Mr. Jia Qinggui, 72, was arrested on December 11, 2017 for talking to people about Falun Gong. He was given criminal detention the next day and ordered to be held at the Dadong District Detention Center.

This is not the first time that the senior engineer from Lingyuan Steel Group has been targeted for his faith. He was arrested on multiple occasions and once held at a labor camp where he was brutally tortured.

The couple filed an appeal to the Qingdao City Intermediate Court, which ruled recently to uphold the original verdicts.

Mr. Zhang was tried on September 13, and Mr. Li faced trial on October 26. They were recently convicted, with both of them sentenced to 9 years in prison.

This is not the first time that Mr. Li has been targeted for his faith. He was twice given forced labor in the past and also fired from his job.

Mr. Li was most recently arrested on April 20, 2016, and the local court convicted him on October 27, 2017 after three court hearings.

His appeal was rejected on December 24. He now awaits transfer to prison.

Mr. Liang Jianjun, a teacher in Lechang City, was sentenced to five years in prison for refusing to renounce Falun Gong.

Mr. Liang was arrested on May 25, 2017 and appeared in court on November 7. It was learned recently that he has been convicted.

Ms. Guo Liqing, 51 years old, lives in Jiang Village, Liangxiang Town, Fangshan District. She was reported to police on November 30, 2016 while distributing 2017 calendars with information about Falun Gong. Officers from the Guandao Police Station in Liangxiang Town arrested her. She was tried by the Fangshan Court on September 5, 2017.

The court recently sentenced Ms. Guo to 16 months’ imprisonment with a fine of 2,000 yuan.

Ms. Jia Xiuchun is a translator in a foreign investment company. She was arrested when she went to Dunhua for a business trip on October 8, 2017. After being held in Yanji for one day, she was taken back to Dalian. Her home was ransacked on October 10 and many of her personal belongs were taken away.

Ms. Jia is a key employee and she'd planned a business trip to Japan in October. The Dalian police cut her passport while ransacking her home. The arrest has been a major setback for Ms. Jia and her company.

Ms. Jia is being held at Yaojia Detention Center.

Ms. Bai Zhiying, Ms. Hou Yanying and Ms. Liu Wenshu were arrested while they drove to Yu County in Shanxi Province to clarify the truth on the morning of January 15, 2017. They were taken to the Yangquan Detention Center.

The Yu County Court tried the three practitioners on June 30, 3017 and issued verdicts in the middle of August. Ms. Bai and Ms. Hou were sentenced to 3.5 years’ imprisonment while Ms. Liu was given 1.5 years’ sentence.

Ms. Jiang Xinbo was strictly monitored and tortured in Heilongjiang Women’s Prison because she refused to give up her belief. Her family went to visit her on December 15, 2017. The meeting only lasted for 20 minutes. Ms. Jiang was emaciated and had shadows under the eyes. Her health had deteriorated.

The prison guards monitored the meeting all the time. There were no details about what she went though in prison.

Ms. Zheng Shumei was identified by surveillance camera when she hung up banners about Falun Gong on a tree. Officers from the Huaiyin District Domestic Security Divison, the Meilihu Police Station and the Wuligou Police Station arrested Ms. Zheng on September 26, 2017. Her arrest has been approved recently.

Ms. Zheng was taken to the Wuligou Police Station for interrogation the next day, then transferred to the Jinan Detention Center, where she has been held until now.

Mr. Fang Keshan, his wife Zhang Shulan and 11 other practitioners were arrested when they put up banners about Falun Gong on the night of May 12, 2016. the Nankai Court held a second session against the couple on September 26, 2017. Their lawyers defended them, and entered a plea of not guilty, with strong arguments.

It was recently learned that the couple had been sentenced to three years’ imprisonment. Ms. Zhang was transferred to Tianjin Women’s Prison on November 15, 2017. Mr. Fang was most likely transferred to prison as well.

The couple’s lawyers was surprised that they didn’t receive any notification of the sentencing. When they went to inquire about the details, they were told that the verdict was issued on November 31. However, Ms. Zhang was transferred to prison two weeks before the verdict.

The Linghe District Court held a first session against Ms. Xu Xiuyun on the morning of November 22, 2017. Her lawyer defended her, and pleaded not guilty. The second session was held on December 14 and the court held another session on December 27.

Ms. Xu, 71, was sentenced to four years’ imprisonment. She has decided to appeal the sentence.