Home > Persecution > Deaths Due To Persecution > Reports of Death Cases
Jilin Man Passes Away After Detention, Harassment
Sept. 9, 2017 | By a Minghui correspondent in Jilin Province, China

(Minghui.org) Mr. Wu Chunyan was arrested at his home with six others while reading Falun Gong books on March 3, 2016. The police raided his home and confiscated all of his Falun Gong-related belongings.

The tremendous pressure from the harassment and long-term persecution hit Mr. Wu hard: he had been imprisoned for years and relentlessly persecuted and tortured prior to the arrest.

In December 2016, his health declined quickly, and he became paralyzed. After six months in the hospital, Mr. Wu passed away in June. He was 58.

Meanwhile, the other two practitioners who were also harassed by the police were sentenced to three and four years in prison, respectively: Ms. Zhu Xiyu has already been taken to Jilin Women's Prison, and Mr. An Fuzi, 76, was released on bail due to poor health.

During the communist regime’s persecution of Falun Gong over the past 18 years, Mr. Wu Chunyan was repeatedly arrested and detained. He was sent to a labor camp twice and tortured. He lost all of his teeth after an inmate slapped his face with a shoe in an attempt to force him to give up practicing Falun Gong.

Mr. Wu was first arrested in 2001 when he went to Tiananmen Square and waved a banner that read “Falun Dafa is good.” The police brought him to a detention center and beat him with batons all over his body. He had trouble moving for three days because of the pain. The police also shocked him with electricity and force-fed him with pepper water. 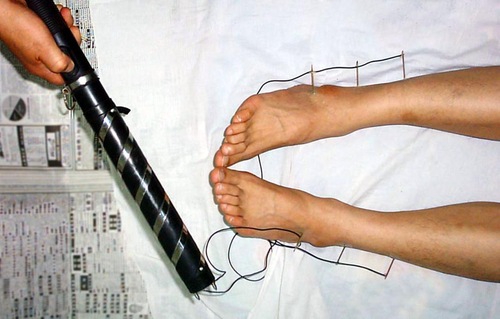 After more than two weeks of detention in Beijing, Mr. Wu was brought back to Yanjin, Jilin Province and sent to a forced labor camp. The Yanjin 610 Office extorted 5,000 yuan each from his employer and his family as "fines."

In the labor camp, Mr. Wu suffered numerous forms of torture—beatings, sleep deprivation, and solitary confinement—because he refused to write a statement renouncing Falun Gong. The guards once slapped his face with a shoe in front of his terrified mother.

The police also forced Mr. Wu to do slave labor working with corrosive materials, such as cement and lime. He was not allowed to shower afterward, resulting in injuries.

Sometimes Mr. Wu was forced to sit on a “small stool” for a long time without moving, which caused the flesh on his buttocks to fester.

Not long after he was released, Mr. Wu was arrested again in 2003. The police tied him to a tiger bench for more than two hours and pulled his arms backward during an interrogation. He was later sent to another two years in the labor camp, where he continued to be tortured because he would not renounce Falun Gong.

“Raising Awareness of the Persecution at Peace Festival in Belgium”