Local residents took the opportunity to learn about Falun Gong and its persecution by the communist regime in China. Many signed a petition calling to end the persecution, and some expressed interest in learning Falun Gong.

North Texas Peace Day was held in Klyde Warren Park on the evening of September 21. Many people took their children to the park after work.

Dex, a photographer, found it appalling that at least 4,000 practitioners have died in the persecution and that lawful citizens had become the target of organ harvesting under the Chinese Communist Party. 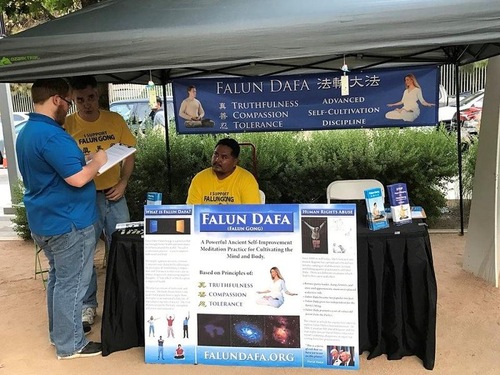 Clayton, a student at University of North Texas (UNT), signs the petition.

Clayton, a student at the University of North Texas, showed great interest in Falun Gong. After talking to the practitioners and asking many questions, he planned to write an article on the issue for his university newspaper.

The annual Denton Blues Festival was held in Quakertown Park. With a population of 100,000, Denton is home to two universities, the University of North Texas and Texas Woman’s University.

Rachel, a young professor at UNT, was very interested in learning Falun Gong. She signed the petition and wanted to tell her friends and colleagues.

A festival volunteer named Victoria was outraged by the organ harvesting crimes. She took some flyers for her church library and planned to talk to the pastor to see what her church could do to help stop the crime. 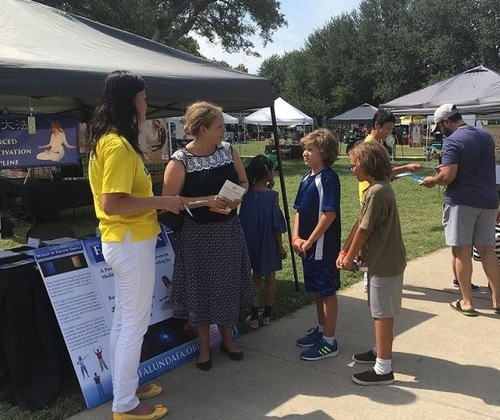 Tara and her sons learn about Falun Gong at the Denton Blues Festival.

Local resident Tara was shocked by the atrocity and asked a practitioner to tell her two sons why they were collecting signatures. She added that they were old enough to tell good from evil.

“My Mother’s Test of Life and Death”