(Minghui.org) Today's news from China includes incidents of persecution that took place in 14 cities or counties in 9 provinces. According to this report, 6 Falun Gong practitioners were subjected to mistreatment during their detention, and at least 19 were illegally arrested. 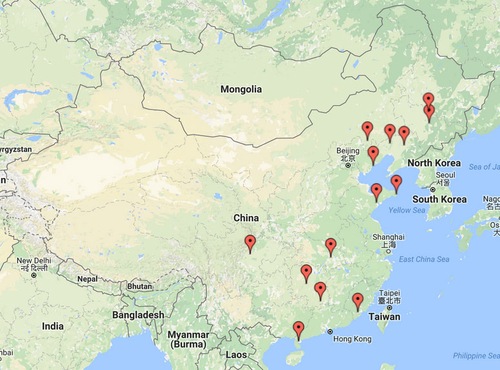 Around a dozen officers from the Jiaozhou City Domestic Security Division and the Jiaolai Police Station broke into Ms. Zhou Minglan's home on the morning of August 2, 2017.

They took video recordings of the place and ransacked her home, confiscating a computer, printer, Falun Gong related materials, and over 300 yuan in paper bills with Falun Gong information printed on them.

Ms. Zhou was not home at the time, so the officers took her son, who does not practice Falun Gong, to the police station where he was held for a day.

The officers waited near Ms. Zhou's home to arrest her. She was forced to stay away from home to avoid being arrested.

Mr. Zhu Jingrong from Sumugao Village, Tianyi Town, Ningcheng County, was reported to the authorities on August 7, 2017. He was arrested by four officers from the Tiexi Police Station.

Six officers took him to his home and ransacked it. They confiscated a music player and notes that he took of practicing Falun Gong. He was released late that night.

Ms. Wang Shuzhen and Ms. Tang Ming from Shidao Town were arrested by plainclothes officers on August 2, 2017, for talking to people about Falun Gong.

Ms. Wang, in her 70s, was released due to her advanced age, but is being monitored at home. Ms. Tang was detained for ten days.

Ms. Xie and Ms. Chen were both sentenced to a four-year prison term. Ms. Xu was sentenced to two years and six months.

Mr. Wang Jianhua was arrested by officers from the Zhanqian Police Station on the morning of August 3, 2017. The officers told Mr. Wang's family that he would be detained for ten days.

Ms. Lin Huiying from the Xiashan District did not return home after she went out to distribute Falun Gong materials on the morning of July 29, 2017. Her family later found out that she had been arrested and taken to the Xincun Police Station.

Ms. Lin is now being held in the Xincun Drug Rehabilitation Center.

When Ms. Liu Renshu, in her 70s, returned home on the afternoon of August 4, 2017, a group of people pushed her into her home and ransacked the place. They confiscated a computer, printer, and Falun Gong books.

Ms. Xu Yaxuan was arrested at her home by officers from the Yushu City Domestic Security Division on the morning of August 8, 2017. The officers confiscated some of her personal belongings.

Ms. Xu was taken to the Yushu City Detention Center.

The three practitioners were placed under criminal detention in the Qinhuangdao City Detention Center.

Mr. Zhou has high blood pressure, and Ms. Jing has lung problems. Both practitioners failed the physical exam and were not accepted by the detention center. They were released on bail.

Ms. Xing Anmei from the Huanggu District became mentally unstable as a result of persecution. She went missing near the Longzhimeng Shopping Center in the Dadong District. Her whereabouts is unknown.

Ms. Xie Qingyun from the Dongxihu District was pushed into a police car by plainclothes officers when she was distributing Falun Gong materials on the morning of August 7, 2017.

Ms. Xie is being held in the Erzhigou Detention Center.

Mr. Li Hui was arrested by six officers on the morning of August 9, 2017. His father went to the Yanquan Police Station to request his release that afternoon.

He was told that Mr. Li had been taken to a brainwashing center, and is on a hunger strike.

Mr. Yuan Guoqing from Shangmei Town was arrested at his home on the afternoon of August 7, 2017. He was taken to a detention center and held for 15 days.

Ms. Mou contracted leukemia while in the Chaoyang Detention Center, so the local prison refused to accept her. She is still being held in the detention center.

When her family went to the Beipiao Court on August 7, 2017 to request her release, they were told that judge Zheng Shoukui was on his way to the detention center.

Ms. Mou was seen being escorted into the Chaoyang Zhongxin Hospital by judge Zheng, detention center guard Liu Juan and three police officers at around 11:30 a.m.. She had just been discharged from the hospital two days earlier.

Ms. Mou was taken back to the hospital on August 8, where Judge Zheng and guard Liu forced her to undergo multiple blood and bone marrow tests, despite her objection.

Mr. Ren Yimin was issued with a formal arrest warrant in early August 2017. His case is now with the Zhongqu Procuratorate, which may indict him for his faith.

Mr. Ren, his wife, parents, sister, and sister-in-law were reported to the police while pasting self-adhesive posters with Falun Gong messages on them in April 2017.

Mr. Ren and his wife were arrested at their respective workplaces on April 23.

Mr. Ren's parents', his sister's and his sister-in-law's homes were raided on the same day. None of them were at home at the time, so they arrested Mr. Ren's brother-in-law instead. He was released the next day.

Police arrested Mr. Ren's parents a few days later, but they were released after posting bail of 6,000 yuan.

Mr. Ren's sister and sister-in-law are now living away from home to avoid being arrested.

Mr. Wang Huaxue, 55, was arrested at his home on July 5, 2016, for refusing to renounce his belief in Falun Gong. He was issued with a formal arrest warrant a week later.

Mr. Wang’s lawyer met with him on July 18. Mr. Wang told him that officers beat him during the arrest and showed him the scars.

A petition calling for Mr. Wang’s release was signed by 373 local residents, and was delivered to the local police, Procuratorate, court, and the detention center.

Mr. Wang was tried on November 17, but no verdict was reached and his case remained in limbo. His lawyer mailed supplemental materials to both the Procuratorate and the court in March 2017, and urged them to drop the charges against his client.

The lawyer told both agencies that the Communist Party’s persecution of Falun Gong has lacked any form of legal basis from the onset, and that his client should never have been prosecuted for exercising his constitutional right to freedom of belief.

Mr. Wang was released on April 7, 2017, and received a notice in early August informing him that the Jianping County Court had approved the Jianping Procuratorate's request to withdraw its indictment against him.

This notice clears Mr. Wang of any criminal record.