(Minghui.org) British practitioners held an event on Trafalgar Square on August 26 to introduce Falun Dafa to the public and to expose the persecution of the practice in China. Londoners and tourists alike were interested in learning more, and many people signed a petition urging an end to the suppression. 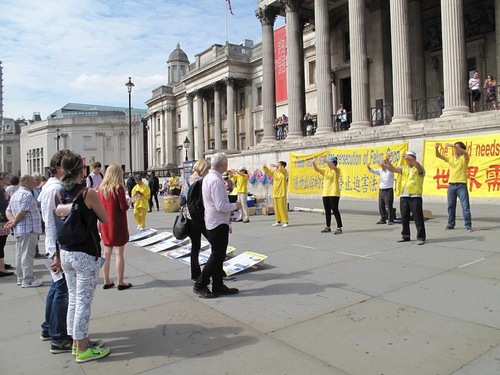 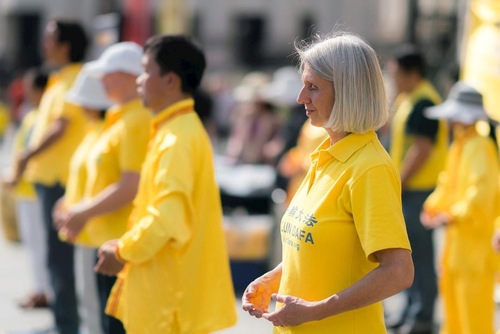 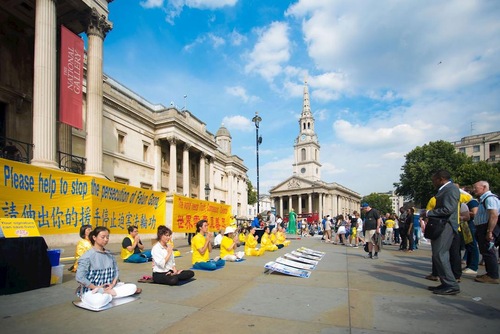 Practitioners set up an informational display and performed the exercises at Trafalgar Square on August 26, 2017. 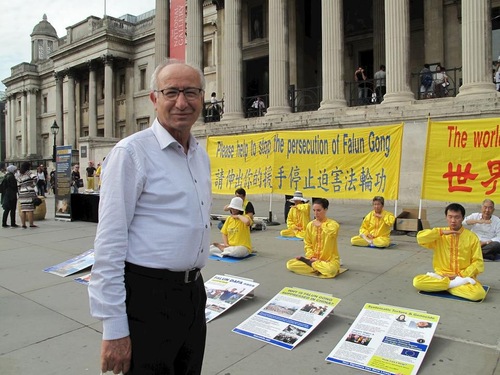 Iraqi professor Ghazi said he would tell his students and friends about the atrocities taking place in China.

Ghazi, a professor from Iraq who teaches finance and venture capital, was in London for a workshop. Having not heard about Falun Dafa previously, he read through the posters and talked with practitioners. “I think this is important. What can I do to help?” he asked. He was interested in signing a petition to help stop the brutality in China and said that he would tell his students and friends about the situation.

Before leaving, Ghazi read all the posters again to gather more information. He noted that a totalitarian communist regime often puts people of differing opinions in prison. “The Truthfulness-Compassion-Forbearance principles of Falun Dafa have universal value. I hope that more Chinese, and people throughout the world, will come know them,” he added. 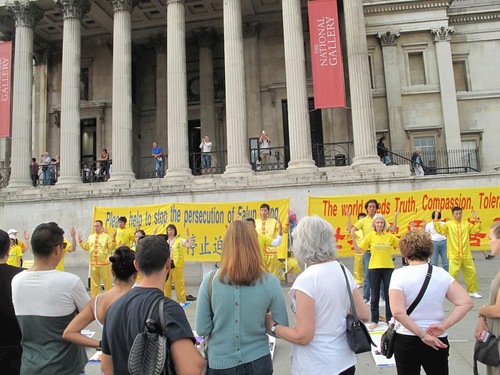 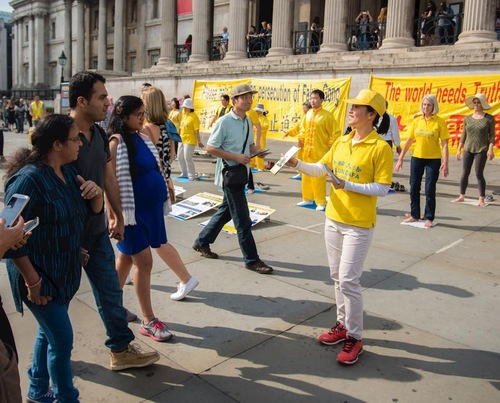 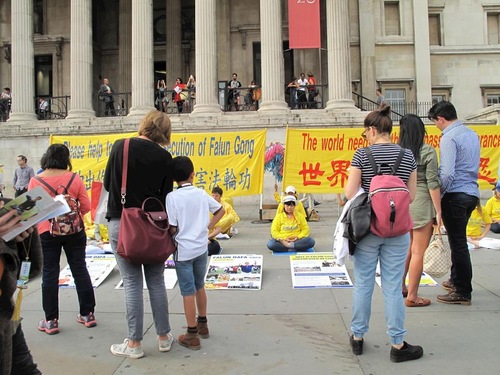 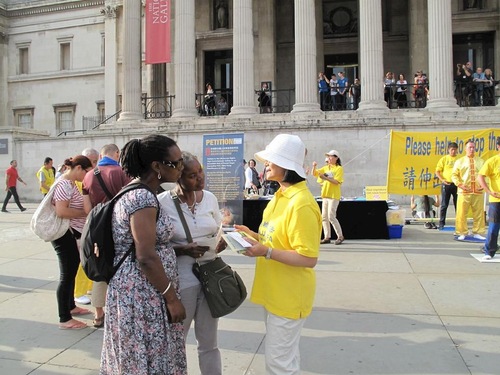 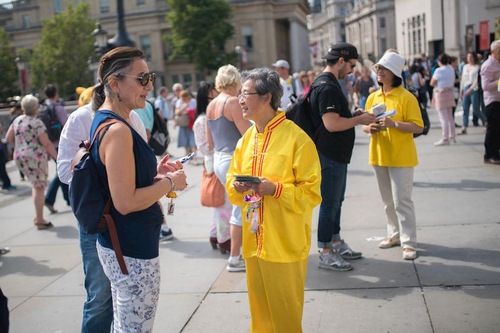 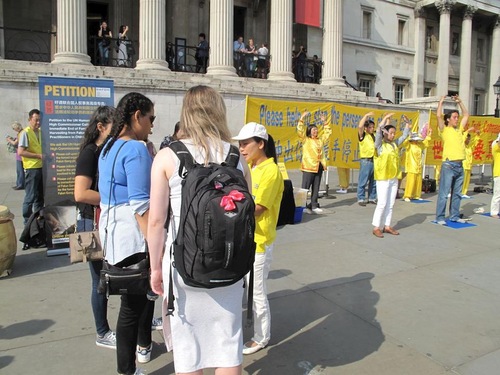 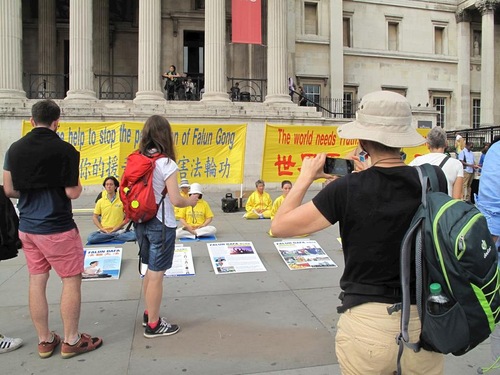 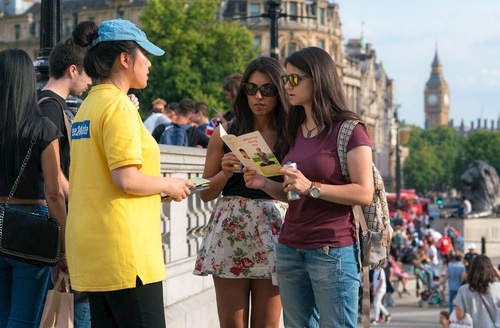 Pedestrians stopped to watch the exercises, read posters, and talk with practitioners. 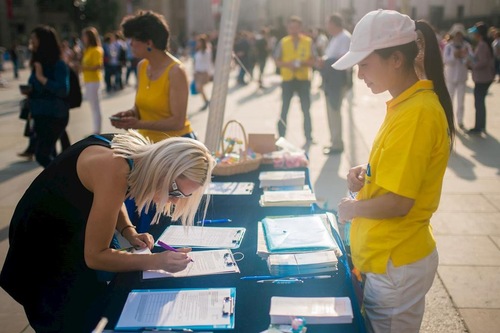 A woman from Germany learned about Falun Dafa for the first time during the event on Trafalgar Square. She enjoyed watching the group practice very much and videotaped it with her cell phone. Upon hearing about the persecution in China, she signed a petition in support of practitioners. “Everyone should have the freedom of belief,” she said. “So many people are practicing it and it is so peaceful. I'm sure it is good.” 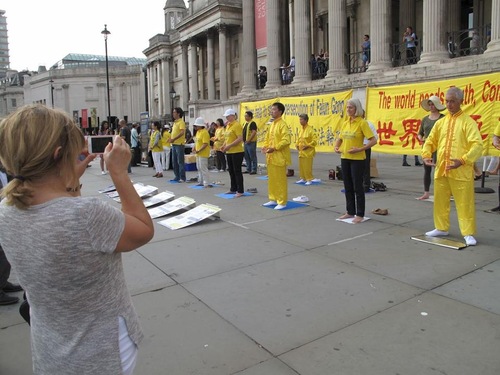 A woman from Azerbaijan photographed the practitioners doing the exercies.

Another woman watched the exercises, read the posters, and then went directly to sign the petition. She was from Azerbaijan, visiting her daughter in London. She said that the exercises seemed wonderful and took lots of pictures. “Forced organ harvesting in China is a crime of the communist party against humanity. We cannot let it happen,” she said, about the Chinese regime's forced organ harvesting of prisoners of conscience, the majority of whom are Falun Gong practitioners. 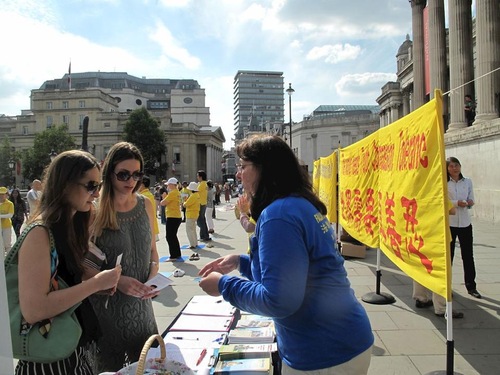 Two girls on their way to the National Gallery stopped and talked with practitioners.

Two girls who came to see the National Gallery on Trafalgar Square were drawn by the group exercises. They talked with a practitioner and signed a petition to stop the brutality in China. “Thank you very much for sharing this information with us. We would not know about it otherwise,” one of them said.

Another woman stood by and watched the exercises for a while. When a practitioner handed her a flyer, she did not accept it at first and said that she had heard about Falun Dafa previously as well as the suppression in China, including the regime's forced organ harvesting of prisoners of conscience. After talking with a practitioner, she signed a petition to help practitioners. 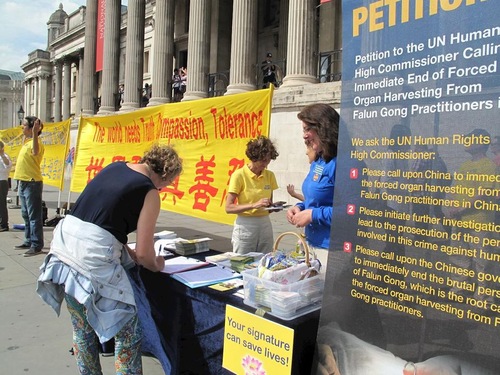 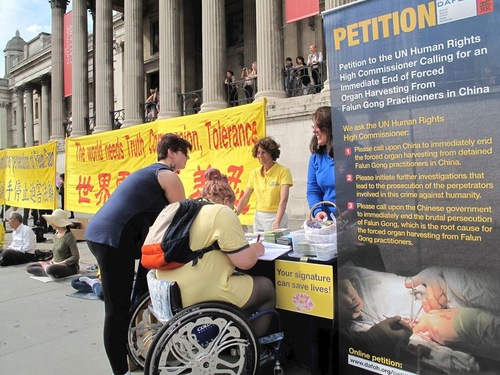 Passersby signed petitions to show their for support for ending the persecution in China.

A woman in a wheelchair came to Trafalgar Square with her friends. She watched the practitioners meditating together and then signed a petition. Having heard about Falun Dafa from previous events, she was impressed by practitioners' consistent efforts. “I want to help you because the crime has to end,” she explained.

A British couple said they had seen practitioners doing exercises in front of the Chinese Embassy in the past, and they'd stopped to get updated information about the persecution in China. “Please keep up what you are doing. Thank you very much for the hard work,” the man said. 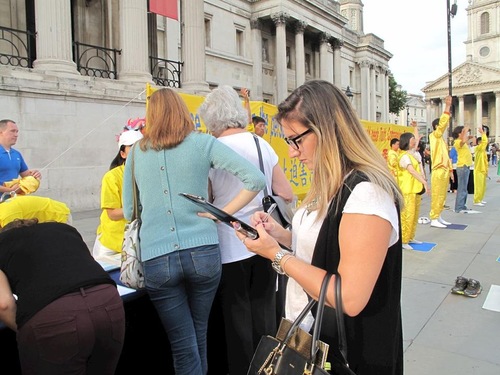 College graduate Jeyda signs a petition calling to stop the suppression in China.

Recent college graduate Jeyda and her cousin stopped to watch the practitioners as they walked by Trafalgar Square. They had heard about Falun Dafa previously, but did not know much about the mistreatment that practitioners experience for their belief in China. Both of them signed a petition to help practitioners and said that they would tell their friends about signing the petitions online.

“I am glad to see you here because this is a great place to raise awareness,” Jeyda remarked. “It is hard to imagine that forced organ harvesting is happening right now on this planet. We have to do something with it.”