(Minghui.org) Ann Teurlings, from Belgium, is the mother of six children. Thirty years ago she sustained injuries from a severe car accident, which left her with chronic pain for decades. However, all of that changed after she began practicing Falun Gong (also known as Falun Dafa), a traditional Chinese cultivation practice for mind and body. A few weeks ago, Ann shared her story at a Minghui summer camp in England. 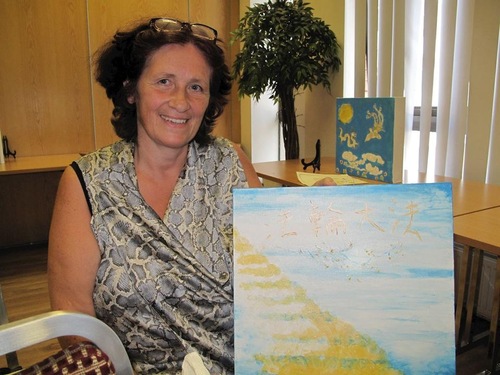 Ann Teurlings and her artwork.

Although Ann survived the terrible car wreck, the accident left her with lasting injuries. She was in constant pain and could barely walk. She needed a cane to get around.

“I couldn't run; it was hard to keep up with the children. I couldn't play with them on the playground,” she recalled at the summer camp. 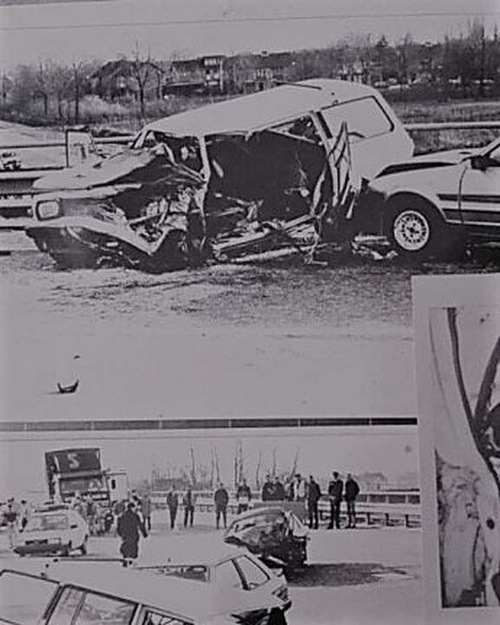 A photograph after the car accident 30 years ago which left Ann with chronic pain for decades.

About four or five years ago, her then-8-year old daughter Elly met a girl named Lucia at school. The two young ladies became best friends. Lucia's mom is a Falun Gong practitioner. She heard about Ann's story from Elly, and called Ann. She wanted to tell Ann in person about Falun Gong's amazing healing power. But Ann didn't want to meet Lucia's mom.

“After experiencing so much pain, I didn't believe that my pain could be healed by anything. I'd even lost my trust in people,” Ann related.

Over a period of three years, Lucia's mom tried several times to introduce Falun Gong to Ann, but Ann turned her down every time.

One day, Ann visited Lucia's house. Lucia's mom finally had an opportunity to lend Ann a copy of Zhuan Falun (the main book of Falun Gong).

“I started reading the book. Right away I realized that this was exactly what I needed. I knew I had to finish it,” Ann recalled. “I kept reading and reading. I read it again and again. By the time Lucia's mom told me that I needed to read it more than once, I had already read it several times,” Ann said. “Four months later, all my pain was gone.”

Introducing Falun Gong to Others

Ann took up this amazing cultivation practice right away. She began to share her story with those around her.

“Last year, I attended a Falun Gong march in Berlin. I walked the whole time. I was amazed when I realized that I had walked more than 6 miles that day! Over the last 30 years, I was never able to walk this long.

“I then attended a march in Munich. After that, I was able to run! My 11-year-old daughter Elly screamed 'My mom can run! She can run!' She had never seen me run,” smiled Ann.

“Actually, my 28-year-old daughter had never seen me run either. She was so happy and excited when I told her last Christmas that I could run now. She asked me what happened. I told her it was because I read Zhuan Falun. She was so amazed.

“Seeing the changes in me, many friends of mine also started to practice Falun Gong, because they all knew what I was like before.

“I am really lucky that I encountered Falun Gong. I thank the founder of Falun Gong, Master Li Hongzhi, for everything he has given me.”

Ann regrets that she was so stubborn when Lucia's mom tried to introduce Falun Gong to her.

“For three years, I refused to meet her. I would have started practicing and stopped the suffering three years earlier, if I had not been that stubborn,” Ann said. “I know some people who are like the old me, who do not want to learn about Falun Gong due to stubbornness. But I believe that everybody can benefit from it, if they are willing to learn.”

Elly started to practice Falun Gong soon after she saw the changes in her mom.

Ann was surprised to see that the young girl understood Zhuan Falun very well. She tries to follow the guiding principles of Falun Gong – Truthfulness, Compassion, and Forbearance.

Elly often tells her mom when they study Zhuan Falun together, “Oh, Mom, now I understand why you are so forgiving of others. Oh, Mom, now I know what to do [in certain situations], and I know what you are doing.”

Ann was happy that Elly conducts herself at school based on the principles of Falun Gong.

Elly tells her, “At school, if somebody is mean to me, I just smile, and say in my heart, 'Thank you for giving me virtue. I will not be mean back to you.'”

“I am very happy that an 11-year-old girl can behave like that. It is Falun Gong that taught her,” Ann said. 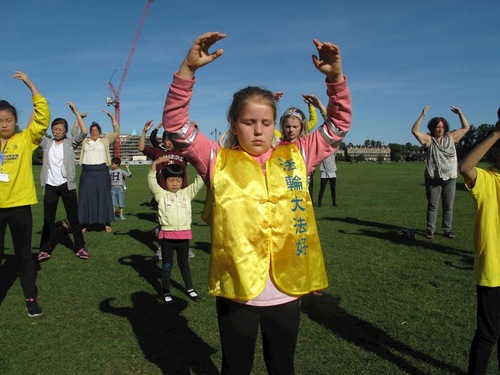 Elly does the exercises at the Minghui Summer Camp on August 13, 2017.

Last summer, both mom and daughter drove with Lucia from Belgium to England to attend the Minghui Summer Camp, a camp for young Falun Gong practitioners.

The young girls enjoyed the Chinese language and culture courses, dancing, and art classes. They also enjoyed reading Zhuan Falun and doing the exercises every day with other young practitioners. 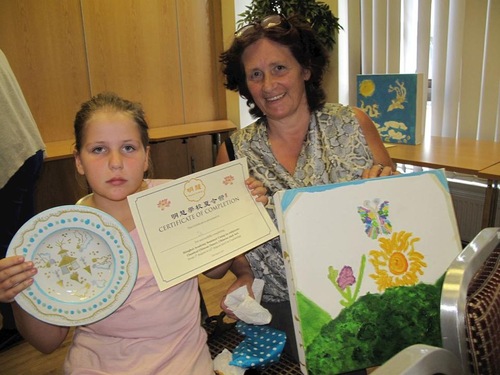 Elly and mom at the Minghui Summer Camp.

Recalling the life-renewing experiences and seeing her daughter growing up with the principles of Truthfulness, Compassion, and Forbearance, Ann is filled with gratitude. She hopes that more people will also benefit from this wonderful cultivation practice.