(Minghui.org) Today's news from China includes incidents of persecution that took place in 14 cities or counties in 10 provinces. According to this report, 6 Falun Gong practitioners were subjected to mistreatment during their detention, and at least 21 were illegally arrested. 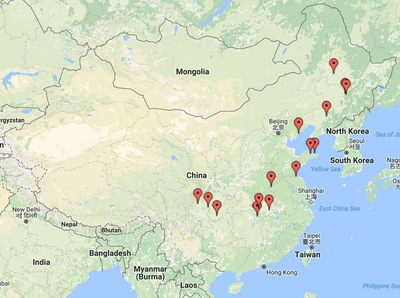 Two police officers led by Sun Jiqun, a member of the Kaishansi Community Residential Committee, broke into 80-year-old Ms. Peng Zexiu's home on July 21, 2017 and demanded to know if she practices Falun Gong. The officers took photos of her and asked her daughter to sign paperwork. They confiscated photos of the founder of Falun Gong.

Mr. Tang Ming was arrested on August 2, 2017 for talking to people about Falun Gong.

Ms. Wang Yulin, about 78, from Huangshigang District was arrested by officers from the Shengyanggang Police Station when she was on her way home, accompanied by her neighbor.

Ms. Song Liqin was arrested at home at the No. 9 Area, Dongfeng New Village, by two officers from the Xueyuan Police Office, Daqing Hi-Tech Zone, on the afternoon of August 5, 2017. The officers took photos of her home and confiscated over 50 copies of Falun Gong books. Ms. Song was taken to the police department, where she was questioned about suing former Chinese Communist Party head Jiang Zemin. She was released that day.

Ms. Niu Yuhui was taken to the Jilin Province Women's Prison on August 2, 2017. Prior to that, she had been on a hunger strike for over seven months. She is now surviving on liquid nutrients. This last month she had to stay in the severe illness room in the Public Security Hospital.

Mr. Liu Jingfan was arrested on the street by officers from the Nancheng Police Station on the afternoon of August 2, 2017. He is held in the Nanshan Detention Center for 10 days of detention.

Two officers, one with the last name Xia, from the Mengyang Town Police Station went to Mr. Jiang Fuming's home at the No. 4 group, Dongxing Village, to harass him on the morning of April 28, 2017. Mr. Jiang was not at home. The officers confiscated photos of the founder of Falun Gong and some printed materials.

One afternoon 10 days later, these two officers returned to Mr. Jiang's home. They took photos of Mr. Jiang and demanded that he not distribute Falun Gong materials and not post signs.

Ms. Guo Shujie from the Yueyanglou District was reported on the evening of July 25, 2017 for talking to people about Falun Gong. She was arrested by officers from the Nanhu Police Station. Thirty minutes later she was taken to the Lengshuipu area, where she was interrogated until midnight by Yi Sansan and Zhang Chuping from the Yueyanglou District Domestic Security Division. Her family brought her back home at 10:00 a.m. the following day.

Ms. Chen Xiuying was arrested by officers from the Xindong Police Station. She has been held in the Nancheng Detention Center for a month.

Ms. Xia Guanxiu (73 years old), Ms. Tu Baoying (61 years old), and Ms. Luo Hanying (in her 50s) were reported by someone who is responsible for monitoring the Internet at a residential community. The three practitioners were talking to people about Falun Gong on the streets on the morning of August 3, 2017. They were arrested and taken to a detention center by officers from the Xiantao Domestic Division.

Mr. Song Zhirong, in his 70s, retired from the No. 1 Datong Mine, Songzao Coal & Electricity Company, Qijiang District, was arrested at home by local police officers and the mine's security section staff on July 2, 2017. The officers lied to him that they would take him to the police station for questioning. Instead, Mr. Song was taken to some place in Hechuan District for brainwashing for a month.

Ms. Wen Yulan was arrested by officers from the Baitaling Police Station on July 28, 2017. She was detained for 15 days. Officers stayed outside Ms. Chen Xiuju's home to monitor her. Her family was harassed.

Mr. Liu Haikuan was arrested at home by officers from the Jinqiao Police Station, Development Zone, on January 29, 2016. He was held in the Yantai No. 2 Detention Center. He was tried on December 2, 2016. He was given a two-year prison term on March 30, 2017. Mr. Liu appealed to the Yantai Intermediate Court. The intermediate court upheld the original judgment without notifying his lawyers or his family members. A prison guard called Mr. Liu's family on July 31, and told them that the intermediate court upheld the original verdict.