(Minghui.org) A celebration of Mid-Autumn Festival was held in Chinese communities of Boston in late August 2017. Falun Gong practitioners set up a booth at the celebration activities to introduce Falun Gong to the public, and to expose the Chinese Communist Party's (CCP) persecution in the past 18 years. 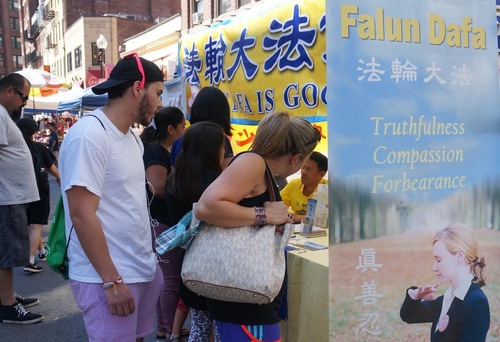 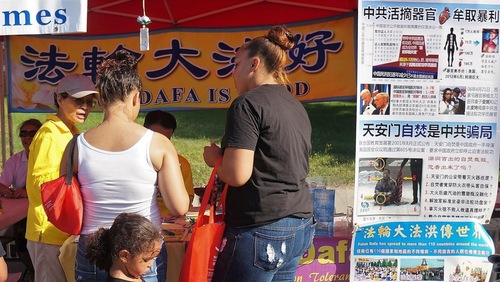 Falun Gong practitioners held activities in both Chinatown and Quincy during the festival. Their large banners, photo exhibit and exercise demonstration attracted many people to their booths.

Many local Chinese people greeted practitioners and took flyers. Some asked for more information and copies of the Nine Commentaries on the Communist Party. Some Chinese parents brought their children to learn how to fold paper lotus flowers, which are a symbol for the practitioners enduring persecution in China, as the pure lotus flowers grow up out of a dirty swamp.

A seventy-five-year-old Chinese lady approached the photo display and saw the information about the CCP's crime of harvesting organ from living practitioners. She told a practitioner, “The CCP is ruthless. You should expose it. It has persecuted so many people!” The practitioner told her about quitting Communist organizations. She happily agreed to quit the Youth League and Young Pioneers, which she had joined at a young age.

Mr. Pan, another local resident in his seventies, told Falun Gong practitioners how his father's generation and grandfather's generation were brutally persecuted by the CCP. He had quit the Communist organizations before. Now he would like to learn Falun Gong. Mr. Pan learned the first exercise at the booth and took an exercise instruction DVD with him.

Having lived under the influence of the CCP's propaganda, many Chinese tourists were surprised to find that people around the world practice Falun Gong. A Chinese lady was skeptical at first, but after hearing facts about Falun Gong, she said, “I see! It turns out the CCP has fabricated stories to justify its persecution!”