(Minghui.org) A Dalian City resident sentenced for her faith has been denied family visits since her appeal was turned down in April 2017. Starting in August, her lawyer was also not allowed to meet with her, as the local detention center was getting ready to send her to prison.

Ms. Yuan Xiaoman, whose son lives in the Washington D.C. area, was arrested on May 12, 2016 because she refused to renounce Falun Gong, a spiritual discipline being persecuted by the Chinese communist regime. She was tried on November 16, two days after her son called for her unconditional release in front of the Chinese Embassy in Washington D.C. 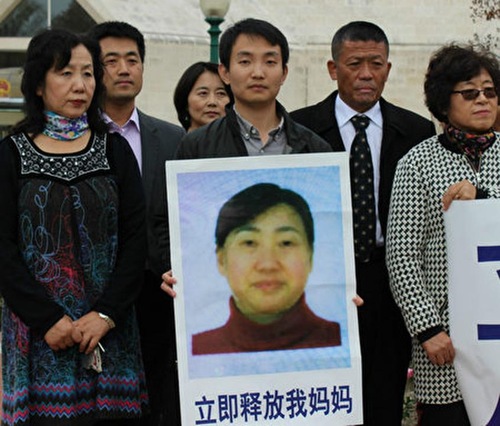 Ms. Yuan’s son holding a picture of her; the caption on the picture reads “Immediately release my mother.”

The presiding judge convicted Ms. Yuan on December 23, sentencing her to 3.5 years in prison and levying a fine of 5,000 yuan against her.

Ms. Yuan filed an appeal soon afterwards, and Dalian City Intermediate Court ruled on April 26, 2017 to uphold the original verdict. Her family hasn’t been allowed to see her since then. Only her lawyer was allowed occasional meetings with her.

Her husband filed a complaint with the higher court in July, requesting a retrial. He is awaiting a response, and he vowed to appeal to Liaoning Province Superior Court if the higher court rejected his request.

Ms. Yuan’s lawyer tried to visit her in early August, but was turned away. He was told that the detention center received notice from the higher court to get ready for her prison admission.

“Fellow Practitioners, Let Us Cultivate in a Down-to-Earth Fashion”