(Minghui.org) The U.S. 2016 Report on International Religious Freedom was released at a press conference in Washington on August 15, 2017. China is among the ten “Countries of Particular Concern” for its severe religious persecution. Secretary of State Rex Tillerson specifically mentioned the persecution of Falun Gong, noting that in 2016, “dozens of Falun Gong members have died in detention.” 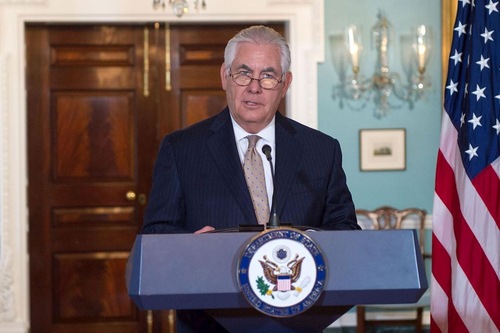 U.S. Secretary of State Rex Tillerson at the press conference.

Tillerson Brings Attention to the Persecution of Falun Gong in China

In Tillerson's remarks he said that freedom of religion is “a core American value under the Constitution’s First Amendment, as well as a universal human right.” Yet close to 80 percent of the world’s population cannot fully enjoy such freedom.

“Where religious freedom is not protected, we know that instability, human rights abuses, and violent extremism have a greater opportunity to take root,” says Tillerson. He said that the Trump administration is committed to addressing these conditions and the State Department will continue to advocate for people with faith.

In China, he noted, “The government tortures, detains, and imprisons thousands for practicing their religious beliefs. Dozens of Falun Gong members have died in detention. Policies that restrict Uighur Muslims’ and Tibetan Buddhists’ religious expression and practice have increased.”

In the report’s preface, President Trump writes that “From the beginning, America has been a place that has cherished the freedom of worship. Sadly, many around the globe do not enjoy this freedom.” He wishes that “good people of all faiths, Christians and Muslims and Jewish and Hindu, can follow their hearts and worship according to their conscience.”

China has been designated as a “Country of Particular Concern” (CPC) for having engaged in particularly severe violations of religious freedom since 1999. In October 2016, the US Secretary of State redesignated China as a CPC, together with Sudan, North Korea, Myanmar and nine other countries.

The report shows that people with religious faith in China are still detained, arrested, and tortured. “Falun Gong reported dozens of its members died in detention. A pastor of an unregistered church and his wife were reportedly buried alive while protesting the demolition of their church; the wife died while the pastor was able to escape. There were also reports of the disappearance of a Catholic priest, and the death of a rights activist for Hui Muslim minorities and others that the government said was suicide.”

Many Die in the Persecution of Falun Gong

According to the Report, “According to Falun Gong, 80 practitioners died either in custody or shortly following their arrest during the year.” The Report quoted the Dui Hua Foundation that “at least 3,403 Falun Gong practitioners were imprisoned and 330 were detained” as a result of religious activities.

Several cases of severe persecution are recorded in the report.

For example, on March 13, 2016, Falun Gong practitioner Yan Guoyan reportedly died shortly after being released from detention, reportedly due to maltreatment while in custody.

In another example, on March 27, Sun Mingqiang died of injuries suffered on November 9, 2015, when security personnel outside a military academy in Shangdong Province severely beat him for talking to students about the persecution of Falun Gong, reportedly leaving a hole in his skull.

Chinese authorities pressure Falun Gong practitioners to give up their faith by all means.

The report states, “Some officials required families to sign statements guaranteeing they would not take part in unregistered churches and ‘cult organization’ activities related to Falun Gong as a prerequisite for registering their children for school.”

Arrests of Falun Gong practitioners continued to increase around “sensitive dates” such as the annual meetings convened by the National People’s Congress and the Chinese People’s Political Consultative Conference, according to NGOs and international media. It is estimated that “thousands of adherents in the country had been given terms of up to three years in administrative detention.”

Following up on Special Cases

The situations of practitioner Wang Zhiwen and human rights attorney Gao Zhisheng continued being discussed in the report for the third year in a row.

“Authorities continued to subject Falun Gong practitioner Wang Zhiwen to heavy surveillance after his October 2014 release from prison. Following his 15-year sentence for ‘cult-related’ activities, authorities continued to prevent him from traveling overseas to reunite with family members; Wang in August said authorities had cancelled his passport and banned his travel until 2018. He was reported to be in poor health and lacking adequate medical care.”

“In June human rights lawyer Gao Zhisheng, who had defended religious groups including Christians and Falun Gong members, released a memoir published in Taiwan detailing reported abuses he had suffered during six years of harassment from authorities, including abductions, followed by five years of detention, and physical abuse in prison, such as beatings to his face with an electric baton. Gao and his family said after his release in 2014, that government agents continued to subject him to intrusive visits at home and deny him permission to travel for medical treatment.”

China Pushes the Persecution of Falun Gong Beyond its Borders

The persecution of religious freedom extends to Hong Kong, Macau and other countries.

The Report also includes provocative actions by the CCP-affiliated organizations towards Falun Gong in Taiwan, Vietnam, Thailand, and South Korea.

“According to Ming Hui, during the year there were a series of cases in which prosecutors, courts, and police departments declined to press charges against arrested Falun Gong practitioners.”

On December 23, 2016, a public prosecutor in Chongqing, overseeing the case of Falun Gong practitioner Zhang Jun charged with “using a cult to undermine law enforcement,” said “We have not found any laws or statutes and don’t have any evidence that can prove that Falun Gong is a ‘heretical cult.’”

The International Religious Freedom Act of 1998 requires the U.S. State Department to release an annual report on International Religious Freedom. The report does not target any particular country. It presents specific data for the benefit of Congress and the Administration as a resource to help them administer foreign aid, diplomatic resources, and refugee applications.