The letter addressed the long history of state-sanctioned live organ harvesting from Falun Gong practitioners in China. The communist regime in China has conducted a brutal persecution of Falun Gong since July 20, 1999. Thousands of practitioners have been confirmed to have died as a result of police violence under the persecution. Hundreds of thousands have been imprisoned in the authorities' attempts to force them to renounce their faith. In its campaign against Falun Gong, the CCP's military, judicial system, police, and medical professionals collude to harvest organs from living practitioners for profit. 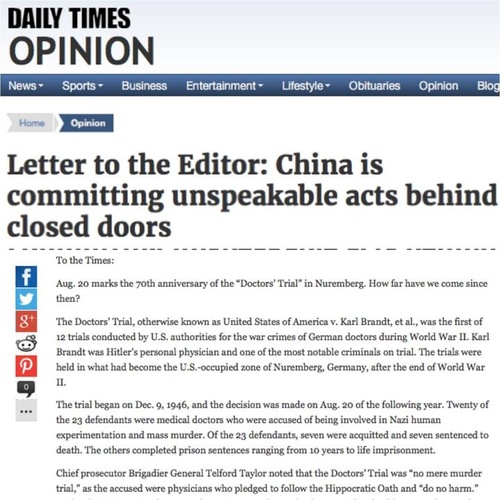 The letter opened with the Nuremberg trial, “Aug. 20 marks the 70th anniversary of the 'Doctors’ Trial' in Nuremberg. How far have we come since then?

“The Doctors’ Trial, otherwise known as United States of America v. Karl Brandt, et al., was the first of 12 trials conducted by U.S. authorities for the war crimes of German doctors during World War II. Karl Brandt was Hitler’s personal physician and one of the most notable criminals on trial. The trials were held in what had become the U.S.-occupied zone of Nuremberg, Germany, after the end of World War II.
“The trial began on Dec. 9, 1946, and the decision was made on Aug. 20 of the following year. Twenty of the 23 defendants were medical doctors who were accused of being involved in Nazi human experimentation and mass murder. Of the 23 defendants, seven were acquitted and seven sentenced to death. The others completed prison sentences ranging from 10 years to life imprisonment.
“Chief prosecutor Brigadier General Telford Taylor noted that the Doctors’ Trial was 'no mere murder trial,' as the accused were physicians who pledged to follow the Hippocratic Oath and 'do no harm.' Under the Nazi regime, however, doctors were no longer healers providing health care to the people but agents of the state, sifting out those who were deemed abhorrent and therefore unworthy.
“The medical crimes witnessed in the Holocaust were so egregious that many were convinced that with firm ethical principles and legal stipulations in place, particularly those detailed in the subsequent Nuremberg Code, no such events, particularly on such a large scale, would ever occur again.”
The letter continues, “Yet today, despite the presence of internationally recognized standards, we are unfortunately reminded of how a non-transparent, unaccountable system overseen by a powerful government can result in horribly destructive results.
“For over 15 years, the Chinese government has been directing physicians to forcibly harvest vital organs on demand from living Falun Gong practitioners while they are in detention. These peaceful individuals are, like European Jews were decades earlier, considered expendable and even dangerous. After all, with 70 million people in China practicing truthfulness, compassion, and tolerance – central tenets of the Falun Gong practice – how can the government depend on compliance by the populace to move forward its agenda of misinformation, corruption, and intolerance?
“The surgeons performing these horrendous acts are testament to the government’s agenda: Some of these killers can be understood as another kind of victim, silenced not by death but by mind-numbing propaganda that tells them who is worthy of life and who is not. Enver Tohti, one of the few surgeons who has come forward to share his experience of harvesting organs from a living prisoner in China, has this to say: 'They [government officials] made you disabled to think [for] yourself. My whole body just became a robot … just performed to do what I had been programmed to do. So anybody, if they label themselves other than communism, Communist Party or member then they will be treated as an enemy of the state. Therefore, they are not even qualified as [a] human being. And therefore, they are subject to whatever punishment is available. They made you genuinely believe what you are doing is for a good cause.'
“The Doctors’ Trial prosecuted and sentenced convicted physicians for their abuse of medical knowledge. Although the Nazi physicians did not break existing laws, the verdicts were made based on the violation of the guidelines outlined in the Hippocratic Oath. The absence of a legal framework that would have otherwise prevented unethical human experiments likely contributed to the relative openness with which the crimes were committed in the concentration camps.
“Today, the basic rights of human subjects and patients first established under the Hippocratic Oath have not changed, but the awareness of committing crimes against humanity has. Knowing about the potential danger of prosecution for such crimes, transparency has become the single most important factor to prevent medical abuse. China has been able to conduct unspeakable acts not only because of an intense onslaught of propaganda but because these crimes are being committed behind closed doors. 70 years after the Nuremberg trials, modern day physicians must remember that full transparency is the best way to prevent and stop abusive medical practices.
“Without any independent investigations being done in China, and China’s failure to acknowledge killing prisoners of conscience for organs, we cannot rest assured that the necessary changes are being implemented.
The doctors call for action against such crimes: “If we want to preserve the spirit of the Doctors’ Trial, we must not wait for China to provide transparency but instead insist on it. This is both our responsibility as human beings and a moral imperative for those of us working in the medical field. Furthermore, we must protect the good intentions of those governments and medical bodies who have worked tirelessly to ensure that ethical treatment is practiced around the globe.
“This is the time to say to our elected officials and leaders in the transplantation and medical community, Never again. Never again shall we witness such brutality by any government body. Never again shall we stand idly by while those who were trained to heal are instead committing acts of genocide.”

A Note on DAFOH: Doctors Against Forced Organ Harvesting, based in Washington, D.C., is founded and organized by medical doctors of various specialties from all over the world. Full membership is intended for medical doctors and medical professionals who recognize the necessity to stop the practices of illegal organ harvesting and will be granted after approval. Non-medical professionals can sign in as supporters.