(Minghui.org) Ms. Zhong Yifang, 63, was released from the Longquanyi Women's Prison, Sichuan Province in January 2017 after being detained for eight years.

Since the Chinese Communist Party (CCP) initiated the persecution of Falun Gong, Ms. Zhong had been arrested, and detained in a forced labor camp, as well as prison, all for upholding her faith in Falun Gong.

Ms. Zhong Yifang went to Panzhihua City in 2009 to renew her resident identification card. She was arrested by officers from the Jinjiang Police Station on October 14, 2009.

Cui Fuli, head of the Renhe District 610 Office, Yang Xiaohua from the security section of Ms. Zhong's former work unit, and around 10 police officers ransacked her home. Then, she was taken to the 610 Office for interrogation. They questioned the whereabouts of her laptop. They had confiscated 2,300 yuan without informing her.

She told the police that the laptop had been sold to an unknown buyer. The police was not satisfied with her answer. They tortured her on the tiger bench. They beat her head and temple with a paper roll.
Then they tied her hands behind her back with a rope and hung her to a rail. They pulled the rope up to gradually raise her. They sealed her mouth and nose with a dirty wet cloth. They interrogated and tortured her until 11 p.m., after which she was taken to the Wanyaoshu Detention Center.

Ms. Zhong was sentenced to eight years in prison and transferred to the Longquanyi Women's Prison on July 6, 2010.

Ms. Zhong was immediately put under strict control upon her arrival in the prison. Then she was given a physical examination after about 10 days. The prison doctor injected an unknown drug, and drew her blood, after which she fainted.
She was taken to the strict control unit for three months, where she had to sleep on the concrete floor. After that, she was forced to do hard labor. She was made to stand in the hallway for three days if she did not complete her quota. The guards used different torture methods, such as standing and bending for three days. She was kicked and yelled at for failing to stand still with a 90-degree bend.

She was given unknown drugs and had blood drawn three times a day for a total of 104 days [49 days in the 1st year; 55 days in the 2nd year ] in the first two years, and then twice a year.

The guards threw away practitioners' personal belongings. When she was released, she only was given her undergarments. An inmate secretly gave her pajamas and a sweater so she left the prison with some clothes on.

Ms. Zhong talked to a colleague about her recovery from multiple illnesses in April 2001, because of practicing Falun Gong. The person reported her to the local police and was rewarded 1,500 yuan. The police from the Renhe District 610 Office ransacked her home, after which they took her to the Wanyaoshu Detention Center.

While in the detention center, guard Liu ordered her to squat 100 times. Liu ordered the inmates to beat her without worrying about inflicting injuries. She also ordered inmates to put a 42-pound shackle on Ms. Zhong for 15 days. 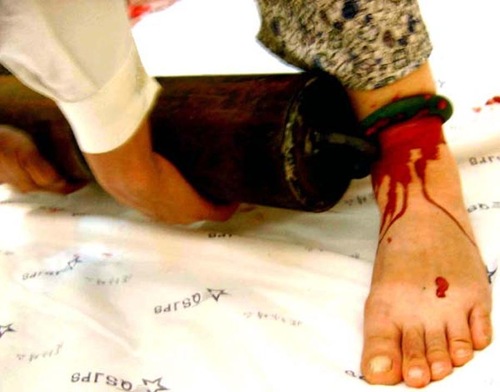 Ms. Zhong was taken to a hostel by Chen, Zhang Hongtai and Cui Fuli from the Renhe District 610 Office and Panzhihua City 610 Office for interrogation. She was handcuffed and hung to a metal window frame from 2:30 p.m. until 9:30 a.m. Then, she was cuffed with both hands behind her back and had to bow for three hours. She was not given any water or food until her return to the detention center at midnight.

Ms. Zhong was detained in the detention center for one month, which extorted 1,000 yuan from her sister before she was released. Three weeks later, the police broke into her home, but left after she called for help.

Ms. Zhong was arrested when she went to her former work unit to collect her retirement money on June 18, 2001. She was taken to the Wanyaoshu Detention Center. She was given one-and-a-half year of forced labor at the Nanmushi Women's Force Labor Camp in Zizhong County, Sichuan Province.

She was force-fed with medication used for mental health patients during her detention.

Prior to the 2008 Beijing Olympics, the police harassed her again. To avoid being arrested, she left her hometown. When she returned in 2009 to renew her resident identification card, she was arrested and sentenced to eight years in prison.

“162 Falun Gong Practitioners from Xinbin County Harassed By the Authorities”

“Reciting Lunyu Helped Me to Improve in Fa Study”