From Unyielding to Experiencing the Joy of Thinking of Others

(Minghui.org) Chiang Wen-chong grew up in a military family. His friends said he was stubborn. He characterized himself as kind but unyielding. But now, neither stubborn nor unyielding describe Chiang, as he has become happy, open-minded, and considerate of others. And he is also free of his former heart disease and anxiety.

What are these great changes attributed to? It all came about through practicing Falun Gong, a traditional mind-body cultivation practice from China. 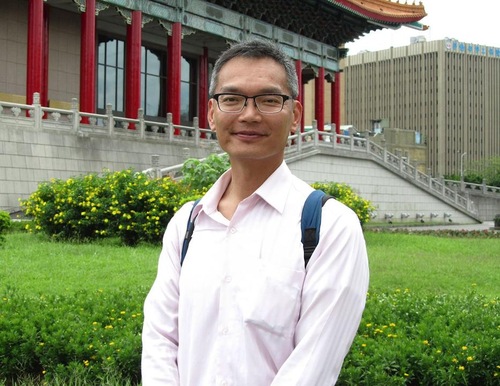 Chiang, an idealist, got off to a rough start with the military judicial system. Early in his career he handled a case in which a soldier had a physical altercation with his superior over a dispute. The solider was detained immediately. Chiang felt that the soldier was imprisoned against legal procedure and insisted on handling the case according to the letter of the law. He issued an order to release the soldier back to his military base to await further investigation.

As a result, Chiang was dismissed from his post and reassigned as a defense lawyer. In addition, he was sentenced to nearly one year in a military jail on the charge of “abusing authority by releasing an inmate at will.”

Chiang was transferred to a civil law office at an assistant level after his release. He also worked as a legal counsel for several companies. He was well paid, but the constant scheming against each other in legal affairs made him unhappy. He resigned and started his own business as a street food vendor.

Chiang started his business making black pudding, a well-known local snack. His wife helped him as best she could. However, Chiang had a strong ego and did not want his wife's help or suggestions. Day in and day out, their disparate views became more disparate and their conflicts more severe. They had frequent disputes. Four years later, in 2014, they filed for divorce.

Chiang continued his food business selling black pudding. Meanwhile, he also prepared a lawsuit to get their home and property for himself, as he'd paid the downpayment on the house. Chiang related, “At that time, relations with my former wife deteriorated to the state that we were major enemies.”

A high school classmate who lived in the same region heard of Chiang's problems. The classmate, who practices Falun Gong, made a special trip to the street market to visit Chiang. They talked for a long time. Chiang agreed to register for a free nine-day Falun Gong introductory seminar.

He attended the seminar in the first half of May 2014. During that time he participated in morning group exercise practice in a nearby park. He had no intention of gaining anything, but with a pure and open heart he studied the Fa, practiced the exercises, and tried to live like a Falun Gong practitioner should, by following the principles of Truthfulness-Compassion-Forbearance. As a result, Chiang became refreshed both physically and mentally.

Chiang said, “I had a hard time climbing stairs to the fourth floor before, but now I can easily walk up to the fifth floor without getting out of breath. It's almost startling that I have become so healthy.”

Thinking of Others and Becoming Open-minded

Chiang started to look within for his shortcomings and worked on overcoming them. He began to think of others and place their needs before his own. As a result, not only did his health improve, his heart and mind were uplifted. His view of the world changed completely.

Chiang recalled, “Before practicing Falun Gong, I didn't think of my former wife's views or issues. I didn't feel that I'd done anything to hurt her, but after practicing Falun Gong, I felt that I owed her a lot. Now I understand that besides love, there should be grace and righteousness between husband and wife. I appreciated her inner heart for her efforts and contribution to our marriage. Without her support, our mortgage could not have been paid for so long.”

He got rid of his attachment to personal interest and immediately felt open-minded and relaxed. Chiang said, “I decided to divide the money from the house sale equally between us. That way she and our daughter can live comfortably. She would be able to realize her dream of having a music room where she could teach violin.”

Along with this major change in mindset, the house sold quickly and for a good price. He and his wife shared the profits equally.

Chiang said, “I didn't struggle for the house when I changed my mindset. Facing my former wife's anger and taunts, I didn't fight back, but sincerely thanked her for the opportunity to improve my heart nature. Gradually, we have become friends again and we look out for each other.”

He added, “Practicing Falun Gong makes me happy. I have benefited so much and will try to practice even more diligently.”

“Introducing Falun Gong to the Public in Nantes, France”