(Minghui.org) Today's news from China includes incidents of persecution that took place in 16 cities or counties in 11 provinces. According to this report, 5 Falun Gong practitioners were subjected to mistreatment during their detention, and at least 20 were illegally arrested. 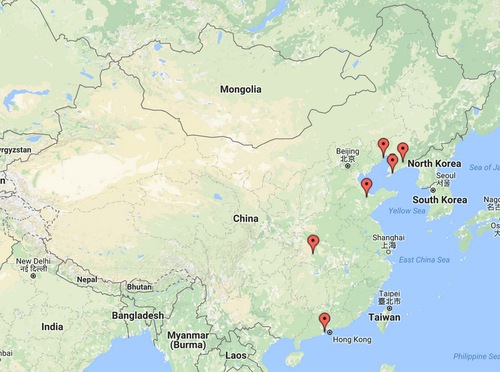 Ms. Liu Aiying from Xifanglu Village, Shangkou Town, was arrested for talking to people about Falun Gong at a farmers market on June 22, 2017. Her whereabouts are unknown.

Mr. Lin Yongxu and his wife Ms. Li Sujuan's case files were submitted to the Xiangzhou District Procuratorate on June 21, 2017.

Ms. Wang Qiong and Mr. Ma Shijun from Shashi District were arrested by officers from the Haoxue Town Police Station, Jiangling County, on June 20, 2017 for talking to people about Falun Gong near Jingzhou City. Both practitioners were taken to the Haoxue Town Detention Center.

Ms. Chen Zaiqin was arrested by officers from the Shuanglong Police Station on June 23, 2017.

Ms. Zhao Yonghua from Huangqigou Village, Suzigou Town, was given a six-year prison term. She appealed, but an intermediate court upheld the original sentence. She is held in the Xiuyan Detention Center and will be transferred to the Benxi Prison.

Ms. Li Heping, who was sentenced to three years in prison for refusing to renounce Falun Gong, was scheduled for a retrial on June 13, 2017, about three months after the local higher court overturned the original verdict.

Mr. Jiang Tao, Ms. Su Qingling, and Ms. Cao Guilan were arrested around mid-June 2016 and sentenced to prison. Mr. Jiang and Ms. Su were sentenced to two years and Ms. Gao to one-and-a-half years in prison.

All three practitioners filed an appeal against their sentences. Mr. Jiang had his appeals hearing first on June 13, 2017, and the two women's hearing followed hours later.

The judge adjourned both hearings without issuing a verdict.

Ms. Luo Jun and Ms. He Dongmei were sentenced to prison for talking to people about Falun Gong.

Both women are going to appeal their sentences.

Ms. Dai was tried on May 23, 2017. Her two lawyers pointed out that the police and the local 610 Office arrested their client without a search warrant and kept her in detention beyond legally permissible terms.

The lawyers demanded Ms. Dai's acquittal and the judge adjourned the session without issuing a verdict.

The lawyers mailed out a legal opinion to the Yuanjiang City Court on May 27, again requesting their client's release. So far they haven't received a response.

Ms. Wang Hui, a Falun Gong practitioner in Huanghua City, Hebei Province, was arrested on May 22, 2017 in her hometown by police from Songjiang County, Zhejiang Province. She was taken to Songjiang three days later.

According to insiders, Ms. Wang was targeted because she posted messages about Falun Gong on social media.

Ms. Wang's lawyer and family traveled more than 900 miles to the Songjiang County Detention Center to see her on June 12, but were told that she had been taken to the Lishui Detention Center.

They rushed to that detention center, only to be turned away and told to come the next morning.

Wu Xianming, deputy chief of the Songjiang County Police Department, was at the detention center when Ms. Wang's family and lawyer got there the next morning. The lawyer requested the release of his client as she had broken no law by spreading information about Falun Gong. He also submitted a written copy of his legal opinion to Wu.

On June 17, Ms. Wang's family received a detention notice, which stated that she was charged with “using a cult to undermine law enforcement,” a standard pretext used by the Chinese communist regime in its attempt to frame and imprison Falun Gong practitioners.

The more than a dozen Falun Gong practitioners arrested over the course of three days in March 2017 are still detained and some are being tortured in the Qiqihar Detention Center.

Mr. Wang Yudong was shackled and beaten when he went on a hunger strike to protest his detention. He is now extremely weak and has excruciating back pain. His mother demanded that he be released, but the police refused, saying that he ruined his own health by going on a hunger strike.

Ms. Wang Yan's husband and mother also made multiple requests to have her released, only to learn she has been formally arrested. A medical evaluation discovered that she had a mass in her stomach, but the police still refused to grant her medical parole.

Ms. Zhang Shunxian, 70, was sentenced to two years in prison and fined 5,000 yuan on May 4, 2017 for filing a criminal complaint against former Chinese dictator Jiang Zemin for initiating the persecution of Falun Gong.

Ms. Zhang, also known as Zhang Renjuan, was arrested on April 19, 2016 and tried on April 6, 2017. She has been denied family visits since her arrest. Her family received a copy of the verdict on May 16.

Mr. Huang Yade has been denied family visits since his arrest on April 18, 2017 for doing the Falun Gong exercises in public.

This is not the first time that Mr. Huang has been targeted for his faith. He was given three-and-a-half years of forced labor more than a decade ago. During his detention, the guards denied family visits for five months. When they did allow his family to see him, they prohibited him from talking and demanded that his family ask him to give up his faith in Falun Gong.

A resident of Langzhong City is scheduled for sentencing on July 5, 2017 for filing a criminal complaint against Jiang Zemin.

Ms. Li Jinfeng was arrested around October 2016 and was taken to the Nanchong City Fourth Detention Center.

She was brought back to Langzhong in mid-May 2017 for her trial, but her family was not advised of the hearing.

Ms. Li's husband visited her in Nanchong on June 23 and learned that the hearing was scheduled to take place in the detention center on July 5.

The two practitioners were arrested on December 14, 2016 and tried jointly on May 23, 2017. The local court delivered its guilty verdicts against them on June 22.