(Minghui.org) The World Organization to Investigate the Persecution of Falun Gong (WOIPFG) held a forum about organ harvesting atrocities in China at the Rayburn House office building on Friday, June 23. Rayburn House is a congressional office building for members of the US House of Representatives.

Similar forums have been held in the past, and this one focused on recent updates to investigations that have been been underway for over a decade. The evidence overwhelmingly suggests that prisoners of conscience in China, most of whom practice Falun Gong, are routinely killed for their organs in a vast, state-sanctioned illicit organ trade scheme.

Speaking at the forum, Mr. Zhiyuan Wang, director of WOIPFG, said that from July 2015 to June 2017, researchers outside China contacted 169 hospitals and organ donation organizations in China by telephone for followup investigations. The results indicate that state-sanctioned organ harvesting atrocities continue in China to this day. 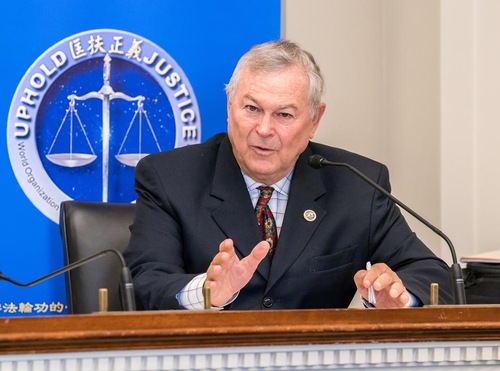 Mr. Wang delivered a list of people under investigation for involvement in organ harvesting atrocities to US Representative Dana Rohrabacher.

Representative Dana Rohrabacher said that what Falun Gong practitioners have done in China and across the world is very important, and that the persecution and brutality that underlies the organ harvesting atrocities must not be overlooked.

US House Representative Christopher Smith, a senior member of House Committee on Foreign Affairs, issued a written statement to the forum. He writes that we cannot accept any more excuses but need answers. He feels that Chinese officials and medical professionals must be informed of the consequences for their actions. They must bear the responsibility.

HR Smith has spoken out about the issue on many occasions in the past, and says that the arbitrary detention, torture, psychiatric test and forced organ harvesting towards prisoners of conscience, especially Falun Gong practitioners, are unacceptable and illegal, and must be condemned and stopped.

Prof. Sen Nieh, Chairman of Mechanical Engineering, at the Catholic University of America, expressed his wish that the US Government and Congress hold an independent investigation into organ harvesting atrocities immediately. “This will help stop the genocide of Falun Gong and bring justice, freedom and hope to those being persecuted.