(Minghui.org) Ms. Hao Yingwu, 51, is a Falun Gong practitioner who teaches English in Daqing City, Heilongjiang Province. She was arrested on the afternoon of March 22, 2017, by offiers from the Daqing Police Department and Chengfeng Police Branch. She was taken to the No.1 Detention Center. Despite her poor health, she was denied medical parole.

Ms. Hao Yingwu started to practice Falun Gong in 1998. Since the persecution of Falun Gong began in 1999, she had been arrested, detained, and given forced labor. During her detention, she was tortured, force-fed, and brainwashed.

Ms. Hao spoke of her ordeals before her latest arrest:

Force-fed and Chained to a Metal Ring in the Ground

After Jiang Zemin, the former head of the communist regime, launched the persecution of Falun Gong in 1999, Beigang Police Station officers often came to my home to harass and threaten me.

Wu Zhenming, head of the domestic security division of the Beian Police Department; Li Wentao, political instructor of the Beigang Police Station; and six other police officers broke into my home on April 19, 2002. They ransacked my home and confiscated my laptop, exercise tapes, and some other personal belongings. I was taken to the Beigang Police Station, then moved to the Beian City Police Department for interrogation, after which I was transferred to a detention center.

In the detention center, I was force-fed. Director Chen Zhong, Zheng Haitao, prison doctor Long Qingxiang, guard Zou Jie, and eight other guards were involved in the force-feeding. They held me down on the floor, while one pinched my nose, others pressed my arms, and some held my legs. They inserted a tube through my nose into my esophagus. They put coarse salt, medication, and cold water into the funnel. Policewoman Zhou Jie stepped on my head and yelled, “Pour! Pour!” I couldn't breathe but kept struggling. Finally, they removed the tube. Zheng Haitao ordered that shackles be put on my feet. They then chained me to a metal ring fixed on the ground. 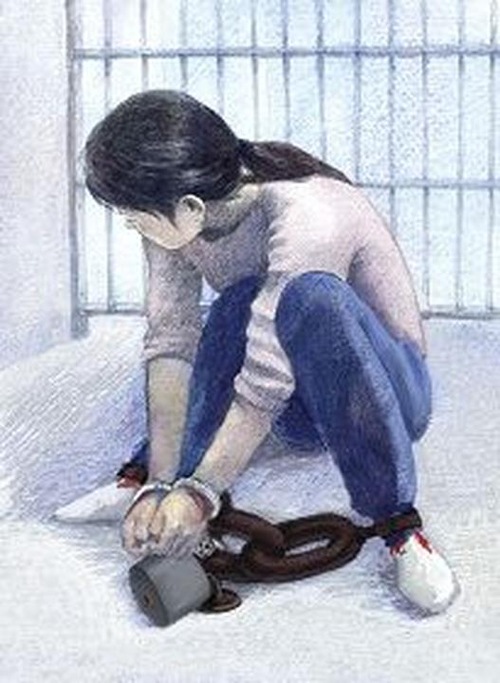 Torture illustration: Chained to the ground by a metal ring

I was held in the detention center for two months and given two years of forced labor. I was transferred to the Shuanghe Force Labor Camp in Qiqihar City on June 6, 2002.

After arriving at the Shuanghe Forced Labor Camp, I was forced to watch videos and listen to information that slandered Falun Gong for over 10 hours every day. My health deteriorated, and I suffered from insomnia and hair loss.

I was also taken to a solitary cell. More than 10 collaborators surrounded me and attacked Falun Gong. I was firm in my belief, even after six months. I was then moved to a cell with no heat. Even my heaviest clothes did not keep me warm.

I was detained in the labor camp for close to two years and released when I was near death after I went on a hunger strike.

Arrested Again and Detained in 2016

When I was waiting for a train at the Daqing West Train Station on April 21, 2016, I was arrested again. I was on my way to see my mother in Heihe City. Four plainclothes officers from the domestic security division of the Daqing City Police Department, including Geng Xiangjun, arrested me. They claimed that I was not allowed to leave the city. I was taken to the Daqing City No.2 Detention Center.

I felt excruciating pain in my right leg and back on April 26 and could no longer move. I was taken to the Daqing City No.4 Hospital and diagnosed with a severely herniated lumbar disc. I was released on medical parole.

“Nothing Stops Practitioners from Telling People the Facts About Dafa”