(Minghui.org) Today's news from China includes incidents of persecution that took place in 11 cities or counties in 8 provinces. According to this report, 27 Falun Gong practitioners were subjected to mistreatment during their detention, and at least 6 were illegally arrested. 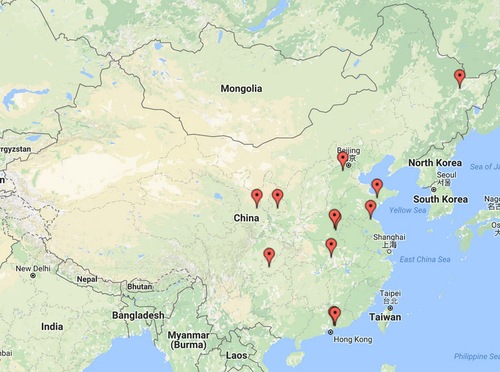 Two officers from Zhugou Police Station went to Mr. Sheng Songgang's home in Xi Village on the morning of March 16, 2017, and questioned whether he had been out to distribute Falun Gong informational materials. They tried to force him to sign their documents.

The officers returned to his home three days later, and still tried to get him to sign their documents.

Jin Hai and other officers from Xiangcheng City Police Department's Domestic Security Division broke into Ms. Luan Meiying's home and arrested her and her husband on March 23, 2017. They confiscated a computer, three printers, and other personal belongings.

Ms. Luan was taken to Zhoukou City Detention Center. Her husband was released.

They were all forced to sign police documents and have their photos taken.

Participant in the persecution of these practitioners:Han Li (韩莉), director of Nanguan Police Station: +86-13939417998

Ms. Zhao, Ms. Su, and Mr. Song were arrested and taken to Shihao Town Police Station that afternoon. They were transferred to the Qijiang District the following day.

The officers told them that they had already questioned other practitioners in Hepan.

Mr. Wang Wenqing, 74, had his home broken into by three officers from Yaoji Police Station on the morning of March 7, 2017. The officers ransacked the place and confiscated a Falun Gong book and three copies of Minghui Weekly.

Two officers led by Wu, the deputy director of the police station, went to Mr. Wang's home the following morning and arrested him.

He was taken to the police station for interrogation, and released an hour later.

She is being held at Huidong Detention Center, where a guard named Liu shackled and handcuffed her, then had her locked up.

She was later sentenced to a one-year prison term.

He went on hunger strike till October 19, 2016, and was eventually released and taken home by his family.

A warrant for the arrest of Mr. Tian was published on the Internet on February 10, 2017. He was arrested and taken to Yi County Detention Center, where he has been force-fed several times over the last two months. He was very thin when his lawyer met him on April 4.

When her eldest son opened the door, the police rushed in and ransacked the place. Her son was beaten and his face was injured.

The officers took pictures of their belongings and confiscated many personal items.

Ms. Zhong Weiling, 65, from the Lianyun District was sentenced to three years in prison. She suffers from diabetes as a result of the persecution. She was often beaten and verbally abused. All her teeth have fallen out. She has become disfigured and has difficulty walking. She was also made to do hard labor.

“Insomnia and Depression Left Me After Learning Falun Dafa”