This legislation was first introduced by former MP Irwin Cotler in 2013 as Bill C-561, an Act to amend the Criminal Code and the Immigration and Refugee Protection Act (trafficking and transplanting human organs and other body parts). 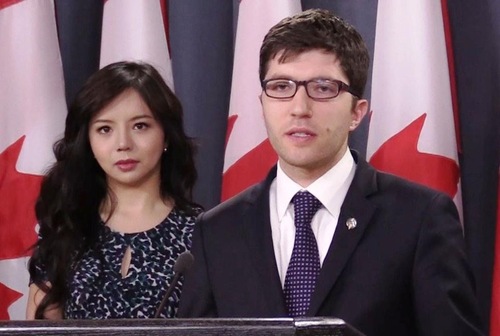 MP Garnett Genuis and Anastasia Lin at the press conference.

Genuis was joined by award-winning actress and acclaimed human rights activist, Anastasia Lin, and former MP David Kilgour. Mr. Kilgour has been a leading voice against international organ trafficking and co-authored the well-known Kilgour-Matas Report that has helped to expose the extent of organ harvesting in China.

MP Genuis said at the press conference that there is no law preventing Canadian citizens from going abroad and acquiring an organ which was taken without proper consent. “This is a gaping hole, a case where the law has not kept up with emerging realities,” he said.

He added, “Canada needs to be vocal in standing up for international human rights and in particular for the rights of persecuted minorities. But even above that, Canada needs legislation which will define in Canadian law, here, our opposition to involuntary organ harvesting in cases where it comes back to our shores. This is a no-brainer. This should be a non-partisan issue.”

“High Time for this Bill in Canada”

“There’s only one country... now that does this [organ tourism] on an industrial, state-sponsored level,” said David Kilgour at the press conference.

Kilgour said that Spain, Taiwan, and Israel have passed laws, like this proposed bill, to prevent organ tourism to China.

He said it is high time this bill was enacted in Canada.

Describing what actually happens when a person goes to China for an organ transplant, he said, “Somebody who is an unfortunate match for you is taken out of a jail or forced labour camp and is killed as they take his organs. And they take all his organs by the way.”

In an interview, former MP and Former Minister of Justice and Attorney General, Irwin Cotler voiced strong support for this effort.

“This [organ harvesting] is a crime against humanity,” he said. “We will hold them [China] accountable. That is what this legislation is all about. I am in support of engaging with China, but engaging on behalf of the people of China, on behalf of the Falun Gong, and holding those committing these crimes accountable.”

This is the fourth time that a Canadian MP proposed a bill like this. Besides Genuis and Cotler, MP Borys Wrzesnewskyj proposed a similar bill twice.