Rallies in Canada, Romania, and Belgium Commemorate the 18th Anniversary of April 25 Peaceful Demonstration in Beijing

(Minghui.org) Over 10,000 Falun Gong practitioners held a peaceful demonstration in Beijing on April 25, 1999, to request the release of dozens of their fellow practitioners who had been unlawfully detained in Tianjin days earlier.

This demonstration is commemorated every year by Falun Gong practitioners all over the world. Rallies were recently held in Canada, Romania, and Belgium to protest the Chinese Communist Party's (CCP) ongoing persecution of Falun Gong

Rally at the Chinese Consulate in Calgary, Canada

Falun Gong practitioners in Calgary held a rally on April 25, 2017, to mark the 18th anniversary of the start of the persecution. Several of the participants recalled the horrors they endured in China and called for public awareness of what continues to happen to this day. 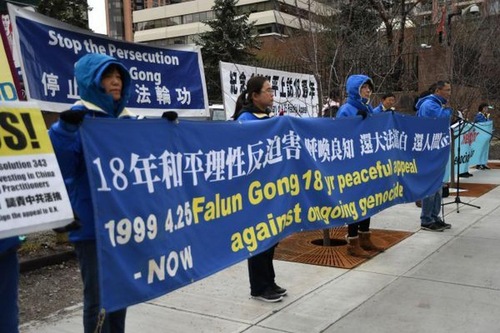 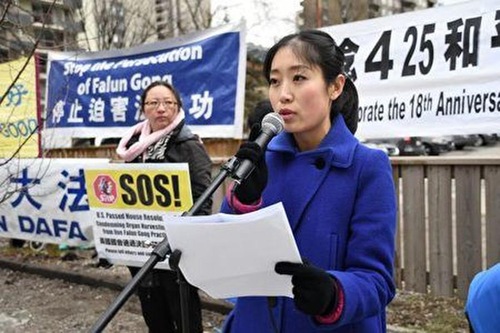 Many cars passing by honked their horns to show their support. Pedestrians accepted flyers to learn more about the event.

Protest in Front of the Chinese Embassy in Romania

Falun Gong practitioners in Romania held a peaceful protest in front of the Chinese Embassy on April 25 to inform more Romanians of the CCP's ongoing persecution in China. 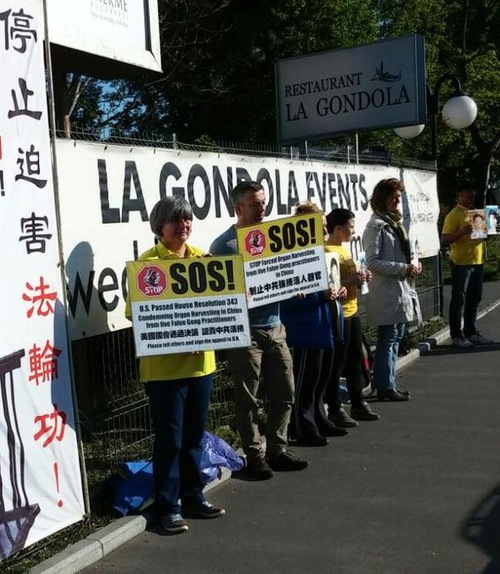 Practitioners in front of the Chinese Embassy in Romania protest the CCP's persecution of Falun Gong.

They set up posters with Falun Gong information, demonstrated the exercises, and distributed information. Many passersby paused to pick up brochures and study the posters.

Protest at the Chinese Embassy in Belgium 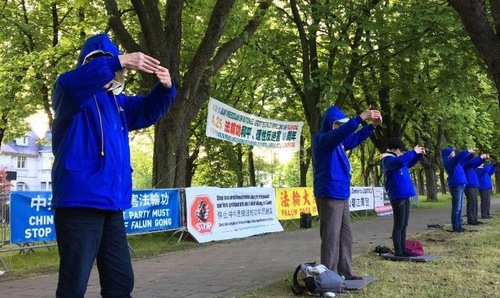 Practitioners’ protest in front of the Chinese Embassy in Belgium

The practitioners did the exercises together in the morning. Their large banners read: “Commemorating the 18th Anniversary of April 25 Peaceful Protest,” “Falun Gong Is Great,” and “Stop the Persecution of Falun Gong,” among others. They also distributed flyers to passersby.

Nico, the event organizer, said that more and more people now know about Falun Gong because of practitioners' efforts all over the world to raise awareness over the past 18 years. He said that events like this would continue to be held until the persecution stops.

“Hubei Woman Dies 2 Months after Being Arrested for Her Faith”