(Minghui.org) Mr. Xie Ge, currently lives in the United States and has filed a criminal complaint against former Chinese dictator Jiang Zemin for launching the brutal persecution of Falun Gong in July 1999.

Mr. Xie was arrested, detained, and severely tortured in a labor camp for three years because he would not give up his faith in Falun Gong.

Mr. Xie had studied at Shanghai University before he learned Falun Gong in January 1998 and was freed of his health problems including insomnia and tachycardia (rapid heart beat).

A new policy came into effect in May 2015 which stated that the Supreme People's Court will guarantee the registration and processing of all criminal and civil complaints. This led thousands of Falun Gong practitioners to exercise their legal right to sue Jiang Zemin for initiating the persecution, which has caused them great harm and tremendous suffering over the past 18 years.

Mr. Xie said in his complaint, “I was arrested on December 4, 2001 while I was walking down the street. Four to five plainclothes police pounced on me from behind and knocked me down. They handcuffed me behind my back, covered my head with a black sack, and forced me into their car. None of them presented their badges. I later learned they were from vice squad of Xicheng District Police Department in Beijing.”

Mr. Xie stated in his complaint that he was taken to a secret interrogation room in the Xicheng Police Department and an officer used a metal bar covered with rubber to choke him and prevent him from speaking. At the same time another officer used the same type of the metal bar to beat his back and thighs.

“They tried to make me tell them the names and addresses of Falun Gong practitioners, but I refused. They beat me severely for two hours with the metal bar. It was extremely painful when the bar struck my body, but there was no sign of injury on the outside at first. My whole back and thighs were severely bruised two days later,” he added.

Mr. Xie was taken to the Beijing “Law Education” Center (brainwashing center) the following day on December 5 and held there until February 23, 2003.

Mr. Xie’s complaint also states: “I believed it was illegal to arrest and torture me for my faith and I began a hunger strike on December 5 in protest. They then started to force feed me on December 12, 2001.”

He continued. “I was tied to an iron chair. If I moved, even a little, seven to eight police kicked and punched me. They inserted a rubber tube 1 cm diameter into my throat through my nose.

“When the tube went into my nose, I felt like my nose was on fire. Blood came out when they pulled out the tube. Sometimes, they had difficulty inserting the tube, so they pulled it out and repeatedly tried again,” Xie said.

The head of the police said to him, “You feel awful, right? We will use this way to torture you until you do as you are told.”

Mr. Xie said, “A few times the tube did not go into my stomach, but instead went into my lung. I nearly died from this torture.”

Mr. Xie's was force fed over 200 times during his detention. 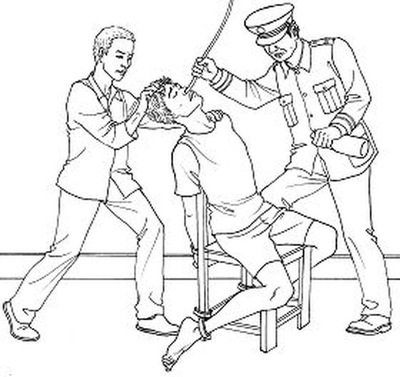 Doused with Cold Water, Frozen, and Deprived of Sleep 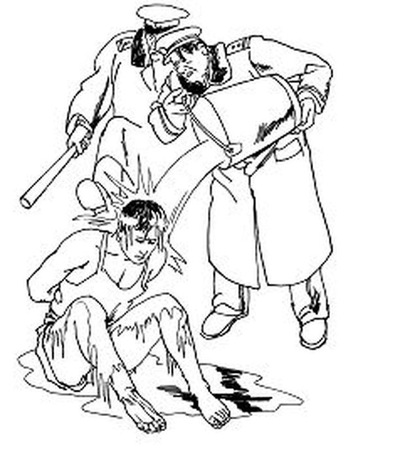 Mr. Xie had been on hunger strike for over 50 days by January 2002, and he was very weak. The weather at this time in Beijing was freezing cold. Around 8 p.m. one night, seven police officers came into his room and ordered him to stand for an extended time.

They began to swear and slander Mr. Li Hongzhi, the founder of Falun Gong, in front of him. After that, they put Mr. Li's picture on the floor and stepped on it.

They then poured cold water over Mr. Xie’s head and opened the window. Mr. Xie shivered from the cold and he was forbidden to sleep for three days.

Hu Zihui, head of the local domestic security division, had Mr. Xie tied to a bed known as the death bed torture in April 2002 because he would not renounce his belief. 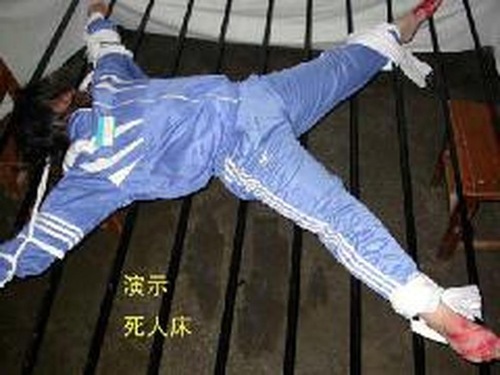 Mr. Xie said in his complaint, “My four limbs were cuffed to each side of the bed. I was tied like this 24 hours a day and couldn't move. I had to relieve myself on the bed.

“Li Jirong ordered the inmates to swear at me. She ordered other detainees to cover my mouth with a towel, pinched my nose shut, then poured the water onto the towel. I was nearly suffocated. The guard Li said to me, “'We are given extra water for you.’”

“I was tied to the iron bed from April to December 2002. Due to the serious torture, I was reduced to skin and bone and was extremely weak. My muscles atrophied which resulted in myasthenic crisis. My heart beat was weak and my blood pressure fell to 40 over 70. I was on the verge of death,” he stated.

Even though his body was in a very poor condition, officer Hu Zihui and others continued to beat him. They slapped his face, punched his chest, and kicked his legs.

Hu shouted at him, “I don't believe I can't make you give up! Once you do, I will release you from this bed. Otherwise, you will die on this bed. Do you know who I am? I am the devil.”

“I had been held at the Beijing 'Law Education' Center until February 25, 2003. I tried to appeal and find a lawyer, but my request was denied,” Mr. Xie stated in his complaint.

“From the second day after I arrived at the Beijing 'Law Education' Center, the police who worked there, some guards from the Beijing Forced Labor Camp, and a dozen detainees would attempt to brainwash me. They used every way to get me to renounce my belief.”

The guards and detainees forced him to listen to and watch videos that slandered and attacked Mr. Li Hongzhi and Falun Gong for hours each day. They also told him that if he doesn't give up his belief, he wouldn't get out of there.

Female guard Cheng Cui'e from Beijing Women's Labor Camp ordered the detainees to stick many pieces of paper on the wall, floor and bed with words slandering Mr. Li Hongzhi and Falun Gong.

Tortured in a Labor Camp

He was assigned to the fifth team. He was reported to the guards because he talked to another Falun Gong practitioner and placed in solitary confinement. Because he persisted in his belief, he was taken to the special team known as the “intensive assault unit.”

“I was isolated in a single room and constantly monitored by other detainees in the intensive assault unit. I didn't get enough food. Each meal I only had one small Chinese bun and a little broth,” Mr. Xie said in his complaint.

“I was forced to sit on a 20 cm high plastic stool. The rule for sitting was that the knees had to be closed, with the hands resting on the knees. My back and neck had to be straight. If I moved a bit, the detainees would beat me.”

“This kind of torture looked easy to withstand, but it is very cruel. Just a few days later the skin on my bottom was broken, and was covered with blood, blisters, and sores. At the end of the day, my feet, knees, arms and back ached. I was tortured like this for more than 20 days,” he said.

“Discovering the Pursuit of Comfort Behind Various Attachments”