(Minghui.org) Today's news from China includes incidents of persecution that took place in 13 cities or counties in 5 provinces. According to this report, 10 Falun Gong practitioners were subjected to mistreatment during their detention, and at least 14 were illegally arrested. 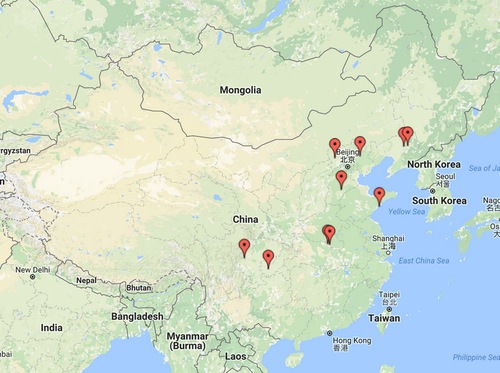 Mr. Gong Shishan, 40, was recently sentenced to a four-year prison term. He is being held in Xinyang Detention Center.

Ms. Yang Hanying, 68, was arrested by officers from the Guanyinqiao Business District Police Station on March 15, 2017, for talking to people about Falun Gong on Guanyinqiao Street.

She was held in the Cuntan Detention Center for 15 days, before being transferred to a brainwashing center on March 31 because she refused to sign a guarantee statement promising to renounce her belief.

Ms. Yang is from the Guanyinqiao area in Jiangbei District.

Mr. Bai Guoxian is being held in Queshan Detention Center.

Ms. Mai Xiufen was arrested by officers from the Ertaizi Police Station, Dadong District, on the afternoon of March 31, 2017, for talking to people about Falun Gong.

She is being held in Shenyang City No. 1 Detention Center.

Police ransacked her home in the Santaizi area, Huanggu District.

Ms. Sun Shihua was arrested by officers from Wangjia Domestic Security Division on March 29, 2017, for talking to people about Falun Gong at Liuer Farmers' Market.

She is being held at Zhangguan Detention Center in Shenyang City.

Ms. Qi Xiaozhi and another elderly practitioner were arrested at Ms. Qi's home on March 31, 2017, for studying the Falun Gong teachings together.

Officers from the Criminal Investigation Subdivision of the Anping County Police Department conducted the arrests.

Ms. Wang Bifang, 67, from Yong'an Village, Anle Township, was arrested by officers from Jinjiang Township Police Station on March 28, 2017. The officers ransacked her home and confiscated a printer, notebook computer, and other belongings.

She was taken to Zhangjiakou City Detention Center.

Ms. Liu Dianying and Ms. Liu Zuoqing, from Gaogezhuang Village, Hetoudian Town, Laixi City, were arrested on the afternoon of March 28, 2017. They were taken to Laixi Detention Center.

Officers from Hetoudian Police Station carried out the arrests and ransacked their homes.

Ms. Zhan Shuzhen, 57, Ms. Xue Yunxiu, 71, and Ms. Liu Guixiu were arrested on February 3, 2016, after being reported to the authorities for distributing Falun Gong materials.

Ms. Zhan and Ms. Liu were tried on January 19, 2017, but the trial was adjourned without a verdict being reached. Ms. Liu returned home later that day.

Mr. Song Xingwei and Mr. Bo Changcheng from Hebei Province have been held in the Baoshan District Detention Center in Shanghai for more than six months.

The Baoshan District Court conducted an unlawful hearing against the two practitioners in the detention center on March 21, 2017. Their lawyers were present.

Mr. Song informed the court that officers from Baoshan Domestic Security Division deceived him, claiming that he would be released within three days if he admitted guilt.

He denied all of the charges brought against him during the court session, and the trial ended at 6:00 p.m.

Several people, including other Falun Gong practitioners, outside the detention center during the trial were arrested.

Mr. Feng Xingji was arrested at the bus station near the detention center at 9:45 a.m. He was escorted home in the afternoon, and the police ransacked his home. He is being held in Jingan District Detention Center.

The police officer and public prosecutor in charge of her case fabricated evidence, and her lawyer informed the court that they should be held accountable.

Her lawyer pointed out that Ms. Ding’s case was clearly wrongful and stated that she should not be charged with anything.

Ms. Ren Xishan, in her forties, was reported to the police for distributing informational materials about Falun Gong at a market on October 18, 2016.

She was arrested by officers from the Fangzi Township Police Station. Her arrest was approved on December 4.

Ms. Ren was sentenced to a three-year prison term on March 20, 2017, without her family being informed of the trial date.

Mr. Xu Huaquan was sentenced to four-and-a-half-years in prison in the Xicheng District Court on September 15, 2014.

He has been held in Qianjin Prison since January 2015.

According to Liu Guanghui, a Falun Gong practitioner who had recently been released, the warden of the No. 3 Division of the prison ordered inmates to beat Mr. Xu for more than an hour.

Ms. Dong Guiwen was arrested on March 7, 2016. She was secretly tried and sentenced.

Her family hired a lawyer and filed an appeal. The Weifang Intermediate Court returned her case to the local court twice due to insufficient evidence.

Ms. Dong was transferred to Jian Women’s Prison around March 28, 2017, after the third secret trial. Her family and lawyer were not notified.

“Teacher Tortured to Near Death for Refusing to Renounce Her Faith”

“Experiencing the Wonders of Cultivation”