(Minghui.org) Today's news from China includes incidents of persecution that took place in 9 cities or counties in 6 provinces. According to this report, 14 Falun Gong practitioners were subjected to mistreatment during detention, and at least 5 were illegally arrested. 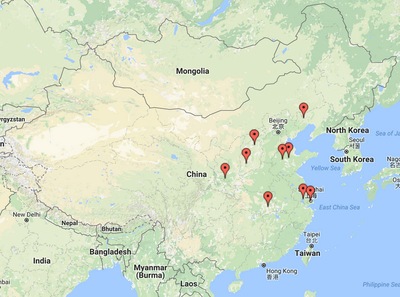 Mr. Song Wanlin was tried at the Yaodu District Court on December 1, 2016. He was sentenced to three years in prison around December 20. He was taken to the Jinzhong Prison around January 5, 2017.

More than 10 officers from the Songlinglu Police Station, Zichuan District arrested Ms. Liu Shouzhi, her husband Mr. Li Xingrong, and their eldest son Mr. Li Xianxin on August 31, 2015 for suing Jiang Zemin, the former head of the communist regime who initiated the persecution of Falun Gong.

The couple was tried on March 16, 2016 at the Zichun District Court. Ms. Liu was sentenced to three years and three months in prison, and her husband Mr. Li sentenced to two years of probation. Ms. Liu was taken to the No. 11 Ward of the Shandong Women's Prison at the end of December 2016.

Officers from the Xinzhou Police Department arrested Ms. Zhao Xiaolu, Mr. Zhao Yijun, Mr. Yang Miao, and Mr. Ma Zhangou from the Zhangjiakou area, Hebei Province, and Ms. Wu Xiaojiao from Xinzhou City on October 5, 2016. They were officially placed under arrest on November 3, 2016. Their cases were filed at the Xinfu District Court.

Ms. Chen Fengjuan from the Pudong New Area was again arrested on January 29, 2017. She is being held in the Nanhui Detention Center.

Mr. Li Weizong and Mr. Li Chuanbao from Majie Village, Puji Town, Zhangqiu District, were arrested from their home by officers from Wangcun Police Station, Zibo City, on January 29, 2017 or the following day.

Mr. Chen Guoyi, a Huangzhou District taxi driver, was arrested on January 12, 2017. He was transferred from the Huangzhou Lockup Center to the Huangzhou Detention Center.