(Minghui.org) Today's news from China includes incidents of persecution that took place in 11 cities or counties in 7 provinces. According to this report, one Falun Gong practitioners was subjected to mistreatment during their detention and at least 19 were illegally arrested. 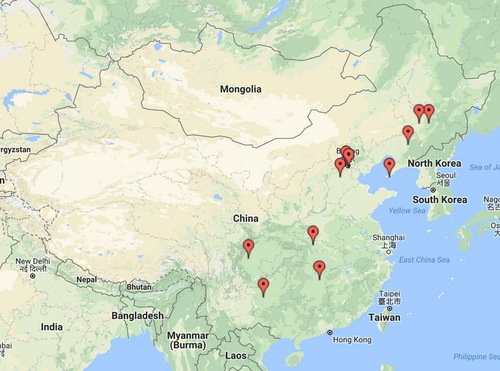 Mr. Mao Xudong was arrested by officers from the Fancheng District Domestic Security Division and the Migong Police Station on the morning of August 15, 2017. The officers confiscated Falun Gong books, a computer, e-books, and a cell phone. He escaped that afternoon and has not returned home.

Mr. Qian Bangyou from Gexianshan Town, Pengzhou City, was arrested at another practitioner's home on October 18, 2017. He was held in the Dabao Town Police Station, Pengzhou City.

Ms. Sun Yan, in her sixties, from Tongzhou District, was arrested by about twelve police officers on October 16, 2017. The police confiscated over 50 Falun Gong books. Her whereabouts are unknown.

Officers from the Donggaodi Police Station, Fengtai District, broke into Mr. Lai's home in the Wanyuanbeili area on the afternoon on October 16, 2017. They arrested practitioners who were studying the Falun Gong teachings there and took them to the Dahongmen Legal System Center. The six practitioners included Mr. Lai, Mr. Gao, Ms. Wan, Ms. Li Fengming, Ms. Li Shiying, and Ms. Wang (in her eighties). Four returned home two days later. Two were detained. Officers ransacked Mr. Lai's home and confiscated a computer, a printer, and printed materials. The total value of the confiscated belongings was about 60,000 yuan.

Ms. Chen Peihua, 66, was arrested at home by officers from the Nanjing Street Police Station on October 18, 2017. The officers confiscated Falun Gong books and materials. She was given a one-year prison term. She is being held in the Jilin City Detention Center.

Mr. Yu Min, an employee at the Changchun Agricultural University, and his wife Ms. Li Shulian were arrested and their home ransacked on the morning of October 17, 2017. Mr. Yu was taken to the Weizigou Detention Center for ten days of detention. Ms. Li returned home on the evening of October 19.

Ms. Sha Hui, 50, from the Zhuanghe area, was arrested on November 9, 2016. She was tried by the Zhuanghe Court on June 7, 2017. She was given a one-and-a-half-year prison term. She is being held in the Yaojia Detention Center.

Ms. Yang Xiaozhi and Ms. Wang Lihua from the Hongtoushan area, Qingyuan County, were reported by villagers when they were talking to people about Falun Gong in the countryside on the morning of October 19, 2017. They were arrested and held in the Qingyuan County Police Department:

Ms. Yang Xiuqiong, a retired worker from the Liyang area, Pingba District, was followed and arrested on October 10, 2017, for distributing Falun Gong materials. Her whereabouts are unknown.

Ms. Xu Shuying from Zhuozhou City was arrested when she went to unregister her recently deceased husband's residential information at the Qingliangsi Police Station on the morning of October 19, 2017. She was taken to the Qingyuan Detention Center.

Mr. Zhang Xiwen from Yuelu District was arrested at home by officers from the Tianding Township Police Station on the morning of October 20, 2017. He was taken to the Wangcheng District Detention Center for 15 days of detention.

Tieling Intermediate Court ruled to uphold the conviction against a local woman sentenced for her faith.

Ms. Zhang Shuxia, 55, was arrested on December 14, 2016 and sentenced to three years in prison for refusing to renounce Falun Gong. Prior to her latest and sixth arrest, she has been incarcerated for a total of nine years in labor camps and prisons between 1999 and 2013.

Ms. Zhang filed an appeal against her latest prison sentence, only to be turned down.

Mr. Sun Fuyi has been sent to Qianjin Prison in Tianjin to serve time for refusing to renounce Falun Gong.

The Huairou District, Beijing resident was arrested along with his wife, Ms. Xu Junming, on October 11, 2016.

Mr. Sun was sentenced to three years in prison on December 28, 2016. His appeal was rejected. He was first moved to Beijing Second Prison before being admitted to Qianjin Prison, where many Beijing practitioners remain detained for their faith.