(Minghui.org) Today's news from China includes incidents of persecution that took place in 6 cities or counties in 4 provinces. According to this report, 1 Falun Gong practitioner was subjected to mistreatment during their detention, and at least 16 were illegally arrested. 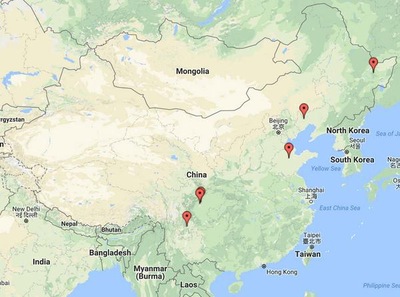 Mr. Zu Chao and his wife Liu Ruiyu are working on odd jobs in Ningbo City. They were arrested at their rental home on the evening of September 7, 2017.

Ms. Chen Maoya was arrested on the morning of September 13, 2017 for talking to people about Falun Gong at the flower market in Qingbaijiang District. Her whereabouts are unknown.

Mr. Zhou Houming and his wife Ms. Wang Kairong were arrested at home by three officers including Wu Xiaoyong from the Lianshan Town Police Station on the evening of September 14, 2017. They were released the following afternoon.

Ms. Xu Zhaocui from Beiguan Village, Zichuan District, was arrested by officers from the Banyanglu Police Station around September 10, 2017. She was taken to the Zichuan Detention Center for 15 days of detention.

A practitioner with the last name Lu from the Shuangyang Mine was arrested on the morning of September 16, 2017 for distributing Falun Gong materials. Lu's car was confiscated.

“A Predestined Encounter With Strangers”