(Minghui.org) Today's news from China includes incidents of persecution that took place in 16 cities or counties in 9 provinces. According to this report, 4 Falun Gong practitioners were subjected to mistreatment during their detention, and at least 24 were illegally arrested. 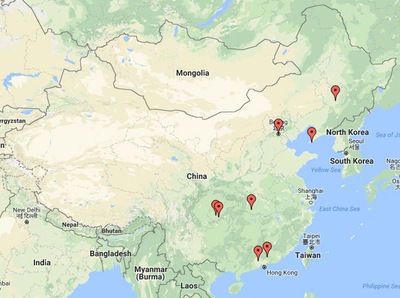 Mr. Liu Longping of Gongan County was arrested at work on the morning of September 20, 2017. His Falun Gong books and his picture of the founder of Falun Gong were confiscated. He is held at the county detention center and has been on a hunger strike for ten days. He was force-fed by the guards.

Ms. Luo Guiyou was arrested on September 21, 2017. Her whereabouts are unknown.

Ms. Zhou of Changshou District was arrested by officers from Huaqiu Town Police Station in September, 2017, while she was talking to others about the persecution of Falun Gong in Huaqiu Town. She is being held at Zunyi City No. 2 Detention Center.

Ms. Dong Yufang from Mingyang Town, Zhuanghe City was arrested by Zhang Jun and others on the afternoon of September 29, 2017.

Ms. Ma Fengqin was intercepted by two women in Zizhuyuan Park on September 27, 2017. She was then surrounded by park security and was taken to a car by force. Her whereabouts are unknown.

Mr. Liu Qingjie and Mr. Li Guojun were arrested on September 13, 2017 and incarcerated at the Shuangyang No. 3 Detention Center. Mr. Li was beaten by officers from the Minkang Police Station and suffered a fractured eye bone. He was admitted to Xinkang Prison Hospital.

Qitaihe City Intermediate Court ruled on September 11, 2017 to uphold the conviction against a local woman sentenced for her faith.

Ms. Wang Yuanju, 61, was arrested on May 8, 2016 and sentenced to one year and ten months in prison and fined 5,000 yuan on July 4, 2017. She appealed, only to be turned down. She has been transferred to Heilongjiang Province Women's Prison on September 20.

Ms. Feng was arrested on July 14, 2016 while accompanying Ms. Zhang Di to visit Ms. Zhang's mother who was detained for practicing Falun Gong. Ms. Feng was targeted because she is also a Falun Gong practitioner.

Ms. Feng was tried on May 4, 2016 and recently received a prison sentence.

Mr. Liang Jianguo was arrested on June 20, 2017 and sentenced to five years in prison on July 28.

Both of them appealed to the Yiyang Intermediate Court at the beginning of September 2017.

Ms. Luo Shuizhen was transferred to Longquanyi Women's Prison on September 20, 2017, after her appeal against her conviction was rejected by the local appeals court.

The 62-year-old Ms. Luo was arrested on March 17, 2016 for distributing Falun Gong materials. She was tried on September 11 that year but her lawyer was blocked outside the courtroom. On March 29, 2017, she was sentenced to 4 years in prison and fined 10,000 yuan.

Ms. Luo filed an appeal and the Luzhou City Intermediate Court held a hearing on August 5 without allowing her family to be present. The higher court soon ruled to uphold the conviction and ordered Ms. Luo be transferred to prison.

This is not the first time that Ms. Luo has been targeted for her faith. She was twice sent to forced labor for a total of five years. Not long after she was released, she was arrested and sentenced to five years in prison. Her husband, who also practices Falun Gong, wasn't spared persecution either. He served two years in a labor camp and seven years in prison. The couple finally reunited in September 2015, but they were soon separated again when Ms. Luo was arrested in March 2016.

Ms. Wang Shufang was sentenced to seven and a half years in prison for suing the former Chinese leader Jiang Zemin.

The 63-year-old Ms. Wang filed a criminal complaint against him on October 31, 2016 for initiating the persecution of Falun Gong that resulted in her past detention. The local police responded by detaining her for 15 days.

Two months later, on January 16, 2017, Ms. Wang was seized in her yard while she was drying clothes. She was sent to the Yaojia Detention Center.

Ms. Wang's family received a notice on September 20, 2017 informing them that she was scheduled to be tried that day. No verdict was delivered.

When her family received a second notice one week later they rushed to the courthouse at 7:30 on the morning of September 27. They waited outside for hours and learned around noon time that the hearing had already concluded. The family wondered why no one informed them of the location of the hearing. They were told that it was held in a basement room. They also learned that Ms. Wang was given seven and a half years and taken out of the courthouse through a secret underground passageway.

The family still doesn't know where she was taken.

Mr. Zhang Jian was given five years, Mr. Li Shaochen four and a half years, and Mr. Liu Jincheng two and a half years in September 2017. All three were arrested on December 7, 2016 and are currently appealing their cases.

Ms. Li, 63, was arrested on November 26, 2015 for distributing Falun Gong materials. Even though the local procuratorate twice returned her case to police citing insufficient evidence, she was eventually indicted and sentenced to three years in prison after two court hearings.

Ms. Li filed an appeal after she received the verdict on December 15, 2016. The local Changjizhou Intermediate Court ordered a retrial, but the lower court issued the same verdict after the retrial. Ms. Li appealed again, and the higher court ordered a second retrial.

The lower court upheld its conviction of Ms. Li but reduced her sentence to two years.

Mr. Zhang Jinghe's appeal against his conviction was turned down on September 27, 2017, and he has been sent to Gongzhuling Prison for his faith.

The 70-year-old Mr. Zhang was arrested on July 5, 2016 and released on bail fifteen days later when Tonghua Detention Center declined to take him citing his health condition.

Mr. Zhang was tried on March 24, 2017 and sentenced to four years in prison and fined 4,000 yuan on June 20. The Tonghua Intermediate Court ruled to uphold his conviction on September 27 and ordered him to be taken back into custody to serve time.

Mr. Liu Qingwang was sentenced to two years and eight months’ imprisonment on July 10, 2017. He filed an appeal to the Guangzhou Intermediate Court.

The intermediate court upheld the original sentence on September 15. Mr. Liu has filed another appeal to the court, requesting to withdraw the decisions made in the first and second trials and release him not guilty.

Mr. Huang Futang was sentenced to three years’ imprisonment and transferred to Jinan Prison in Shandong Province on February 9, 2017.

Guard Chen Jianming ordered Wu Qintao, Ma Dengzhou, Zhang Shaoqing and other inmates to torture Mr. Huang between April 14 and 15, 2017. They stuffed his mouth with a dirty cloth, tied him to a chair and placed him in a bathroom for 15 hours.