(Minghui.org) Today's news from China includes incidents of persecution that took place in 13 cities or counties in 7 provinces. According to this report, 4 Falun Gong practitioners were subjected to mistreatment during their detention, and at least 16 were illegally arrested. 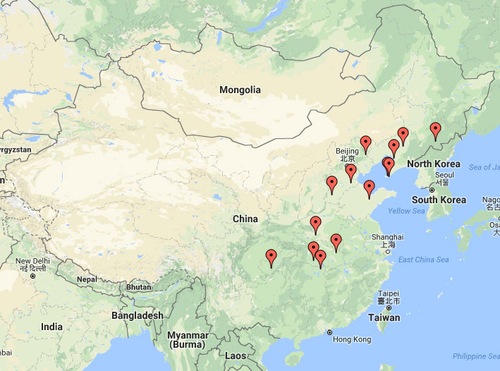 Ms. Ruan Jing from the Quanyang area was arrested on September 19, 2017 for talking to people about Falun Gong in a farmers market. She is held in the Baishan Detention Center for 15 days of detention.

Mr. Wang Shengyun from Guojia Village, Fenghuang Neighborhood, Fangzi District, was arrested by officers from the Fenghuang Police Station on the morning of September 21, 2017. He was placed in administrative detention for one month, and held in the Weifang Detention Center.

Ms. Wang Huimin was arrested on the afternoon of September 21, 2017. She is held in the Pingquan City Detention Center.

Ms. Yang Qiaoyun from Nanwang Village was arrested by officers from the Qiaoxi Police Department on the evening of September 21, 2017.

Ms. Chen Jing and Ms. Lan Ping, employees at the No. 2 Nanyang City Rubber Factory, were arrested on the morning of September 23, 2017 for distributing Falun Gong materials in Qiliyuan Township. Their homes were ransacked. Both practitioners are held in the Nanyang City Detention Center.

Ms. Wang Meiqing was arrested at home by plainclothes officers from the Yulukou Police Station on the morning of September 20, 2017. The officers confiscated Falun Gong books and a computer. At the same time Ms. Yang Dagui, Mr. Huang Handong, Mr. Zeng Jinzhao, and Ms. Zhao Kunli were also arrested. Mr. Huang and Ms. Zhao were taken to a detention center. The other practitioners were released that evening.

Mr. Huang Youjun, 45, was arrested and his home was ransacked by officers from the Qianlianghu Town Police Station on the morning of September 22, 2017. He is held in the Junshan Detention Center.

Ms. Wang Cuixiang, 68, from the Lushun area, was arrested on June 28, 2016. The police confiscated about 10,000 yuan in paper bills with Falun Gong information printed on them, over 200 DVDs, a computer, and a printer.

She was tried at the Shahekou District Court on February 27, 2017. She was sentenced to three years in prison, with three years of probation, and fined 5,000 yuan. She was released on bail at the end of April 2017.

Ms. Zhang from Jing District was taken to the Liaoning Province Women's Prison on September 12, 2017.

She was arrested by officers from the Shisanlipu Police Station on June 12, 2016. She was sentenced to eight years in prison by the Jinzhou District Court. She appealed to the Dalian City Intermediate Court. The intermediate court upheld the original verdict without holding a hearing.

Mr. Han Jimin, in his 50s, from Masanjiazi Town, Yuhong District, was arrested by plainclothes officers on September 20, 2017. He is held in the local detention center.

Mr. Sun Yubin and Mr. Han Guohai from Bayuquan District were arrested on January 25, 2016. They were held in the Gaizhou City Detention Center. Later Mr. Sun was sentenced to five years in prison by the Gaizhou City Court. He was taken to the Dongling Prison, where he was beaten, forced to take drugs harmful to his nervous system, and forced to watch videos that slander Falun Gong.

Ms. Deng Zebi from Beibei District was arrested and taken to a brainwashing center on the evening of September 22, 2017. Her computer, printer, cell phone, and Falun Gong books were confiscated.

Mr. Ji Chunling from Suihua City, Heilongjiang Province, was arrested at home by the Hebei Province police on September 19, 2017. He was taken to Cangzhou City, Hebei Province. He is held in the Beirenqiu Detention Center.

“Cultivating at Deeper Levels to Find the Root Cause”

“Believing in Master and the Fa Instrumental in Passing a Tribulation”