(Minghui.org) Local Falun Gong practitioners held a signature drive on Tal Street in downtown Munich on September 23. The petition they were gathering signatures on asks the United Nations to investigate forced organ harvesting atrocities in China.

A big banner reading “Falun Dafa” accompanied various display boards introducing the peaceful spiritual practice, the persecution it faces in China, and the continuation to this day of state-sanctioned organ harvesting from prisoners of conscience, most of whom practice Falun Gong. The setup also included live demonstrations of the Falun Gong exercises.

It is Oktoberfest in the Black Forest and the streets of Munich are filled with local residents and tourists alike. Many people came to the Falun Gong booth to learn more about the practice. 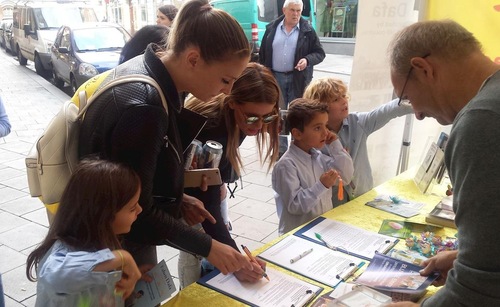 Residents of Munich sign a petition to support efforts to end organ harvesting atrocities in China.

A lady in traditional Bavarian dress came with two friends and their children. She talked to a practitioner and translated for her friends. All of them signed the petition. She commented that people should not be persecuted because of their beliefs.

She also waited for her husband to join them so she could explain the cause to him. He signed and said, “I hope my signature can help. I wish you all the best!”

Lin, a student from Taiwan, had heard of Falun Gong many times but didn't know any details. He asked many questions and found answers from a practitioner at the event. Before leaving, he signed the petition and took some introductory materials. 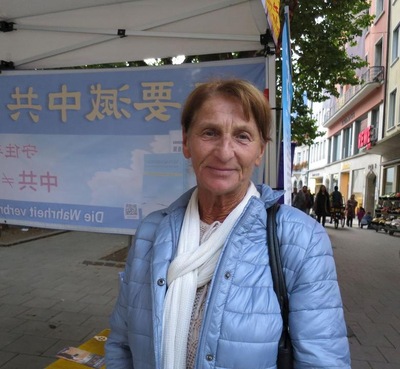 Ms. Melanie Gatzke, a local teacher, was appalled to learn about organ harvesting atrocities in China

“Norway: Raising Awareness of the Persecution in China During “Arendalsuka””